for 7 days beginning the night of this posting, but while fresh in mind I wanted to share them in one place on the site too.  I found a couple of the shots pretty interesting, a brief description follows under each photo:

Acme Radiophoto, May 15, 1950: Ava Gardner in Tossa Del Mar, Spain with Spanish bullfighter and actor Mario Cabre, whom Ava is said to “adore.”  It’s noted that Frank Sinatra arrived the same day and said that he and Ava decided his coming was a mistake because of all the publicity. 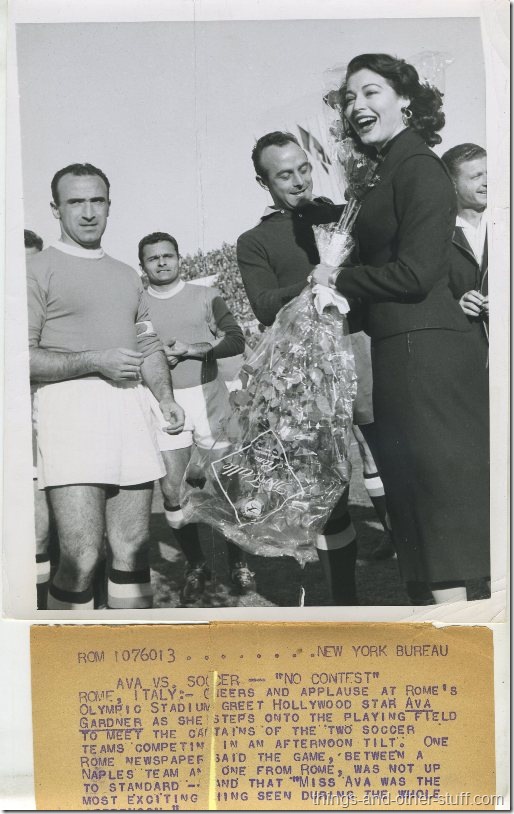 United Press Photo, December 22, 1954.  Ava Gardner at Olympic Stadium in Rome greets the captains of Rome and Naples soccer teams before they square off.  “One Rome newspaper said the game … was not up to standard and that ‘Miss Ava was the most exciting thing seen during the whole afternoon.’”

United Press Telegraph, December 23, 1954.  Ava Gardner relaxes in her apartment in Rome where “The Barefoot Contessa” is filming.  Ava expects to spend Christmas with estranged husband Frank Sinatra who is flying to Rome “in hopes of a reconciliation.”  It’s just one day after the previous soccer photo.

United Press Telephoto, dated December 28, 1954, but I believe actually being snapped a few days before Ava’s return to Rome in the two photos above.  Swedish movie magnate Andrews Sandrew plants a kiss on Ava’s forehead in Stockholm at a party held after the Stockholm premier of “The Barefoot Contessa” (IMDb dates that premier December 21.)

Interesting to note the crop marks in the photo and see how much work the art department did in order to make Ava’s bust appear acceptable for a mass newspaper audience.  I think you should be able to see the whiter areas that are brushed over, if not take my word the section is practically reconstructed!

United Press Telephoto, May 15, 1957, this time Ava is in Mexico posing with “her latest boyfriend, Italian comedian Walter Chiari” during the time “The Sun Also Rises” was being filmed.  The caption mentions that Gardner may divorce her husband, Frank Sinatra, but that she has no plans for an early wedding to Chiari.

United Press Telephoto, June 2, 1957.  With “The Sun Also Rises” complete Ava Gardner is greeted by her agent Sidney Guilaroff as she arrives at Los Angeles International Airport.  The caption says Ava plans to visit friends in Hollywood for a few weeks before returning to her home in Spain.

UPI Telephoto, July 3, 1958.  Last one and actually my favorite, Ava Gardner on the right, a Dawn Manning, 26, of Atlantic City on the left.  Miss Manning is shown arriving at the Atlantic City police station on July 2 where “she was booked on charges of trying to get out of paying bills by taking advantage of her resemblance to actress Ava Gardner” (which I can only assume means that she said she was Gardner!).  Miss Manning was ordered held on $1,000 bail on charges of grand larceny and attempted grand larceny.