I had never really thought about it in such black and white terms, so I was surprised when a recent bout of research showed how definitely the Universal horror film had died in 1936.

I always think of their classic horror era of beginning with Dracula and Frankenstein in 1931, and running through Abbott and Costello Meet Frankenstein in 1948 (happily blaming Universal Horrors for that), so I’ve never much paid attention to the absence of Universal horror releases between Dracula’s Daughter in 1936, and Son of Frankenstein in 1939. Chalk it up, perhaps, to being born to Baby Boomers: to me, the renaissance always began in the late 1950s when Shock! Theater came to television. That was still before my time, but it led to the horror explosion that allowed me to read Dad’s old monster magazines and play with his models and trading cards when I was growing up.

But Universal horror did die in 1936, not to be resuscitated until a bit of dumb luck in August 1938 began a wave a nostalgia that the studio then capitalized upon with Son of Frankenstein and subsequent releases. 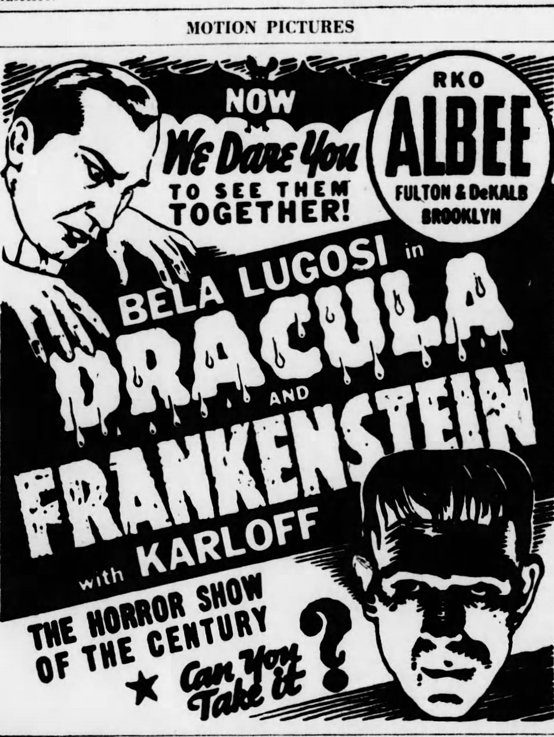 Above: The RKO Albee "dares you" to see Dracula and Frankenstein, together. Brooklyn Eagle, October 28, 1938.

Death came shortly after the Laemmles lost control of the company to Standard Capital Corporation in March 1936. In early May, Variety reported that after release of Dracula’s Daughter, which had been in the works prior to the new regime, there were no other “chiller pictures” scheduled for the 1936-37 season. “Reason attributed,” Variety said, “is that European countries, especially England, are prejudiced against this type product. Despite heavy local consumption of its chillers, U is taking heed to warning from abroad.”

British censorship was just a smokescreen for Joseph Breen’s heavy hand, writes Jim Ivers at Spooky Isles. Breen, head of the Production Code Administration, used overblown press reports “to perpetuate a myth that the complex and confusing British censorship process constituted a virtual embargo on horror films.” In any case, by May 1936, Universal’s new ownership had shelved horror for the foreseeable future.

Unforeseen was a demand for reissues after a shortage of new product in 1938. The shortage was explained within a special section of Motion Picture Herald:

“Reasons for the product shortage are … numerous, starting with interruptions to product schedules caused by Hollywood's floods, the prolonged discussions between home office executives and top ranking studio officials, which turned the attention of the studio heads away from their normal business of film-making. Those discussions had to do with expiring studio executive contracts, the Hollywood ‘economy move,’ inter-company affairs, budget conferences and other problems, all resulting inevitably in a slowing-up of actual filming” (49).

While Warner Bros. and Twentieth Century-Fox sat this out, each stating that reissues were against company policy (though providing them upon demand), MGM offered Treasure Island (1934) and David Copperfield (1935), and RKO offered King Kong and Little Women (both 1933), often paired together in an unusual double feature. According to Film Daily, as early as April 1938, Universal was testing their old horror films on the east coast. Dracula played at the Rialto in New York City, while Frankenstein ran at Long Island theaters. “Results to date in both tests have been good,” said Universal’s eastern sales manager F.J.A. McCarthy, who suggested strong results would lead to the prints being made available to all of the company’s exchanges.

Universal’s first four reissues were then All Quiet on the Western Front (1930), Frankenstein, Lady Tubbs (1935), and Love Before Breakfast (1936). Frankenstein was typically paired in double features with Love Before Breakfast, while Dracula soon emerged as a fifth reissue to run alongside Lady Tubbs. I suppose they thought audiences would appreciate the variety such disparate pairings offered. Despite the early runs in New York and on Long Island, results at this time were characterized as nothing special.

Emil Umann of the Regina Theatre in Beverly Hills had a novel idea. “Dare You See?” the Regina asked in promotion of its August 4, 1938, bill featuring Dracula, Frankenstein, and RKO’s Son of Kong (1933). No Lady Tubbs. No Love Before Breakfast.

The horror triple was supposed to run four days at the Regina, through that weekend. On the first night they had to call the police to restrain the crowds. On day two they dropped Son of Kong to make the feature shorter so they could squeeze in more showings of “horror boys” Dracula and Frankenstein. After the fourth day Umann made a deal to keep the two films playing indefinitely, but after the fourth week of big earnings at the Regina, Universal decided they weren’t making enough through their flat rental fee, so they pulled the two films from the Regina in order to play them at a larger capacity theater that paid by percentage (All of this is covered in detail at John McElwee’s Greenbriar Picture Shows).

It took Umann to physically pair the films together, even though the east coast tests back in April show that Universal at least thought of them together.

Above: Film Daily advertisement, June 7, 1938, the addition of Dracula brings us closer to a monster-mash.

The “horror boys” followed their Beverly Hills rebirth with successes at the Blue Mouse in Seattle, and then the Rivoli in Portland, Oregon, where Frankenstein had played earlier without making any special impression when paired with Love Before Breakfast. Another theater manager had to phone police for assistance when “Frank” and “Drac” made their way to Salt Lake City. Similar successes repeated in San Francisco, St. Louis, Detroit, Chicago. By October, Variety reported that the horror duo broke a six-year house record in Cincinnati, and they were doubling the theater’s normal average take in Indianapolis. Universal ordered five hundred prints of the films to fill dates already signed up around the country for the horror films.

“Whether these unusual results will start a new cycle of horror films is one of those things,” said Motion Picture Daily in October.

Dracula and Frankenstein returned east in October, reaching New York, where “other reissues excepting old Valentinos have been duds.”

The more general idea of reissues gave way to the more specific action of pairing horror reissues. Universal followed Dracula and Frankenstein with a combo of Bride of Frankenstein (1935) and Dracula’s Daughter (1936), while other theaters booked King Kong alongside The Ghoul (1933) and The Walking Dead (1936) with The Bat Whispers (1930).

Above: Another old newspaper ad makes the dare. From Tonowanda, NY's The Evening News, January 12, 1939.

“It seems to have dawned on somebody that what the public wanted, after all, was horror. Confronted with the playfully murderous cavortings of two movie monsters, the public—at least momentarily—could forget about War and Dictators,” wrote Hollywood columnist Robbin Coons. “Already, Frank and Drac, the horror boys,” Coons wrote, ‘can be put down as the showmen’s favorite twins of ‘38.”

By the time of Coons’s column in December 1938, he was able to reply to the question Motion Picture Daily posed back in October, reporting: “The U, scanning its profit books, has lost no time in producing another modern sequel, ‘The Son of Frankenstein.’ This is proceeding rapidly on eerie sets …”

“Nobody at Universal claims to be the Christopher Columbus who discovered ‘Dracula’ and ‘Frankenstein’ were 18-karat gold,” said Motion Picture Daily. “It just happened.”

Nobody at Universal could. It was Emil Umann who did the heavy lifting for them. Umann is spotted in the trade papers as far back as 1922, when he was a twenty-one-year-old assistant manager at a Loew’s in Kansas City. He worked his way out west by 1930, when he was handling publicity at Hollywood’s Pantages Theatre. “Dare You See?” wasn’t Umann’s first big idea either, as he had earned plaudits after serving three-point-two-percent near beer in the lobby of San Francisco’s Golden Gate Theatre at a showing of Moonlight and Pretzels in 1933. He resigned from his position as the Golden Gate’s publicity manager in late 1934, to run his own small Nob Hill theater. Born in Odessa, Russia, in 1901, Umann’s family settled in America in 1906. He married at age seventeen, but that first marriage dissolved at some point and he married a second time to twenty-year-old Margaret Regina Levy in 1936. Did you notice that middle name? At Greenbriar Picture Shows, John McElwee writes that the 800-seat Regina Theatre opened April 21, 1937. Emil Umann had very likely named his new theater after his new wife. Unfortunately “Dare You See?” was Emil Umann’s final spark of fame, as the trade papers reported his death at age thirty-seven on November 21, 1939 (Does anybody know the cause of death? - A reader has emailed with info from Umann's Ancestry.com page: it was kidney disease.).

Son of Frankenstein started a new cycle of horror films at Universal including The Wolf Man and the monster rally features that dominated the 1940s. Monster movies faded again after the War, giving way to the rise of science fiction in the 1950s, but horror had an even more resounding comeback beginning in the late 1950s.

Have a look at THIS POST at A Shroud of Thoughts to read about how Screen Gems’ Shock! television package revitalized horror beginning in 1957.

“The Horror Film Hiatus of 1936-1938” is the Spooky Isles article by Jim Ivers that I referenced within the post.

Also referenced is Part 1 of “The Pair That Curled Your Hair” by John McElwee at Greenbriar Picture Shows. Part 2 is here if you’d like to keep reading.

Finally, THIS POST at The Bela Lugosi Blog collects an incredible number of newspaper clippings, plus photos, advertising, press books, etc. covering “The 1938 Dracula & Frankenstein Double-Bill.” As someone who enjoys happening upon old newspaper clippings during research, my jaw drops at the amount of work put into this one—must have taken months!