Twenty-four hours of Jean Harlow movies are just about to start on TCM. If you're reading this past 6:00 AM ET, then they've already begun! That's when Riffraff (1936) opens today's Jean Harlow Summer Under the Stars programming.

One of the most beloved figures in movie history, Jean Harlow's day on TCM has to be one of the more anticipated selections of this year's Summer Under the Stars. That said, we have seen all of this before, some of it a few times too many (I'm not a fan of Riffraff, Reckless, or Suzy). But nobody who loves Dinner at Eight has seen it enough times, and the same could be said for other popular classics like Libeled Lady and Wife vs. Secretary. Today's schedule includes steamy Harlow pre-Codes Red-Headed Woman and Red Dust, but be sure to catch less known titles of the era such as Bombshell and The Beast of the City (though Harlow has a smaller role in the latter).

While I love those pre-Codes, my recommendation of the bunch is China Seas. It's hard to call China Seas under-the-radar—Harlow and Gable lead an all-star cast—but this action-adventure film seems underappreciated compared to some of the better known lighter titles that play today.

Today's TCM US schedule follows and under that you'll find one vintage newspaper advertisement for each of the fourteen movies (including one 1993 documentary) on today's schedule. Also included are a few old movie card images to add splashes of color and clarity to the otherwise black and white page Enjoy!

Jean Harlow TCM Summer Under the Stars
US schedule, all times Eastern, August 7-8, 2016 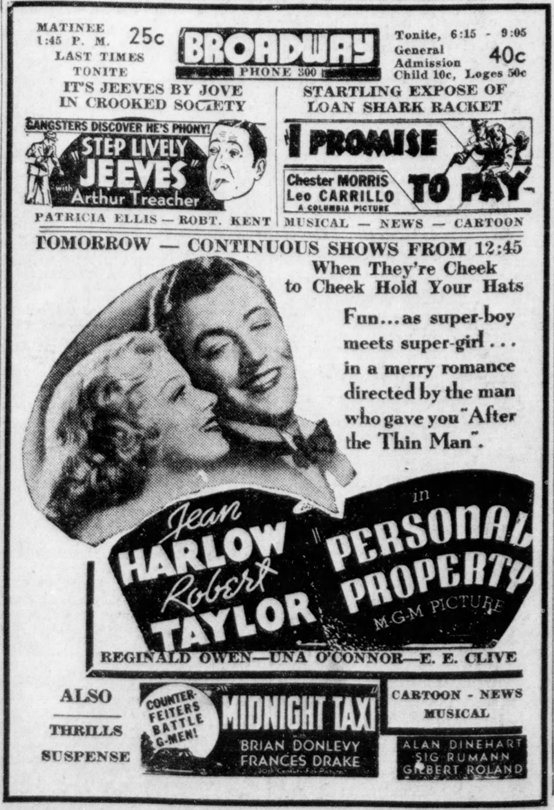 Above clipped from the Chillicothe Constitution-Tribune (MO), 31 August 1935, page 8. Archived review from 2010.

Above: Clark Gable and Harlow.

Above clipped from the Muscatine Journal and News Tribune (IA), 4 November 1933, page 2. 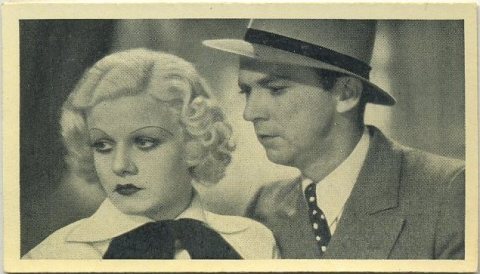 Above: Harlow with Lee Tracy.

The text schedule once more:

Jean Harlow TCM Summer Under the Stars
US schedule, all times Eastern, August 7-8, 2016