Classic Movie Daily subscribers will find images of May McAvoy, Ann Doran, and Hillary Brooke following in today's issue, plus a couple of smaller images at the bottom of this page.

Cliff's Notes
—Popping the notes up higher on the page today, because I didn't want you to miss this and wind up wondering where I have gone.

It's time to finish the book.

This will likely take a few weeks—at least I hope it's weeks—it'll definitely take more than a few days, and I really don't want to start talking about months! Anyway, rather than attempting to split myself in two, this will be the last post from me in this format for a little while.

But you're still going to hear from me. Very soon, in fact.

I believe the date is still to be determined, but I'll be posting about Wild Boys of the Road (1933) between September 10-13 (that is, between this Thursday and Sunday) for "The William Wellman Blogathon" being hosted by Now Voyaging. Email subscribers will simply receive that post, no little "Daily" note like this one.

I have also signed up for the "TCM Discoveries Blogathon" that The Nitrate Diva is hosting on September 19. This one timed out well because I'd already planned to post soon about a favorite Helen Twelvetrees discovery (one I found through TCM), Young Bride (1932) — and here comes your first TV alert — because it plays again on TCM the following Monday, September 21, at 10:00 am EST.

So that's at least two reviews coming over the next couple of weeks. If I'm away from the site any longer for that, and I likely will be for at least another week or two, I'll try to pop in with either a review or a clippings post, just to remind you that I am still around.

Once I think I can get back to the "Daily" schedule without taking off longer than weekends or holidays, I'll bring it back. Think October. No scratch that, I get into trouble when I set dates (But at least you know what I'm thinking). See you then ...

TCM TV Alerts through ... September 30:
These titles play on TCM's US schedule and all quoted times are for my own local Eastern time zone.

—TCM is running a Peter Sellers birthday marathon throughout Tuesday daytime. A bit outside our scope. I didn't even include Sellers in the birthday calendar above, so I guess mentioning it here kills two birds with one stone. Anyway, he was born September 8, 1925.

—The "Five Came Back" spotlight shines on John Huston tonight with Across the Pacific (1942) playing at 8 pm, followed by more WWII-era shorts, including Snafu (I've still got to watch the ones they played last week). The Huston movies come back at 12:45 am with Audie Murphy in The Red Badge of Courage (1951), followed by The Treasure of the Sierra Madre (1948) at 2 am.

—Taking a look through the rest of the month, and doing my best to be as selective as possible ... don't miss these:

Tuesday, September 29, 10:45 am - No Other Woman (1933) - Brief "first impressions" HERE. Part of an Irene Dunne daytime schedule that has lots of other goodies on it.

**More than half of these are somewhat rare on the channel. Titles such as Evergreen, Young Bride, The Phantom of Crestwood, and No Other Woman probably don't play more than once every 2-3 years. As for Went the Day Well?, I haven't bumped into it on TCM before. You're going to want to record each of those if you can.

Also, this pair doesn't do as much for me, but I have reviewed them on the site, so if you want more:

If I'm not back full-time with the "Daily" by October 1, I will pop in and similarly outline the full month of TCM programming for you.

And if you follow me on social media, you can bet I'll be Facebooking and Tweeting the heck out of my reviews of titles like Evergreen, Young Bride, and The Phantom of Crestwood when they play.

Okay, hunkering down to be as productive as possible here. Back with that review of Wild Boys of the Road later this week —
Cliff 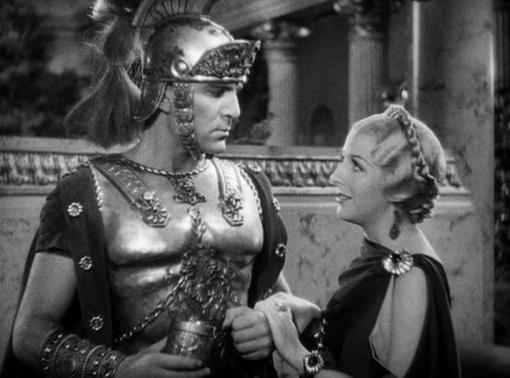 Above: Henry Wilcoxon with Gertrude Michael in Cleopatra (1934). 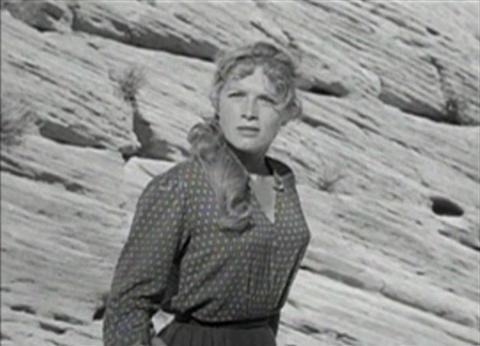 Above: Denise Darcel in Westward the Women (1951).

More Olivia de Havilland Friday Night Because, hey, you only turn a hundred once, right? Best Star of the Month … END_OF_DOCUMENT_TOKEN_TO_BE_REPLACED