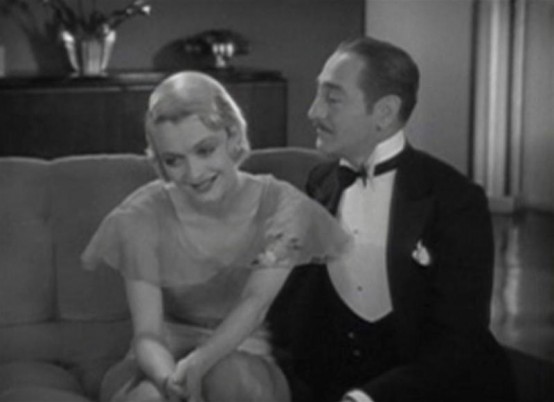 Above: Constance Bennett and Adolphe Menjou.

Thick Great Depression atmosphere overwhelms the opening as the Murdock family wakes to another day of toil. Two sons share a bed, three daughters another. Mom is cranky prepping breakfast; Dad can't find work, but prefers a bottle anyway. One by one the Murdocks filter to the breakfast table, several of the younger generation preparing for work. The house is crowded, filled with a lifetime of belongings and too many bodies.

In retrospect I wish we stuck around this household and had the opportunity to sort out this entire crowd. Instead we spend most of our time with oldest daughter Laura, because she's played by Constance Bennett.

Middle sister Peg (Anita Page), is in the midst of living the American Dream. Her fiance Nick (Clark Gable) appears that morning with some clean shirts for Mr. Murdock and news about his moving up in the family laundry business. Nick will soon be able to afford a nice house in a quiet middle class neighborhood for Peg. They have quaint, traditional problems: When Nick drops Peg off at work one of the questions he asks is if she'd rather he pay more towards her wedding ring or drop the extra money into the house fund. House fund, of course.

Laura (Bennett) is not so easily contented. She's unenthused by her beau and eager to jump when a modelling opportunity allows her to bolt her job behind the department store counter. Laura soon earns $5 an hour as a regular employee posing for illustrators at an advertising agency. Her wages make for a tidy sum towards helping to support her family during these trying times.

When the boss of the agency, William Brockton (Adolphe Menjou), gets his first gander at the proofs of Laura he's eager to meet the flesh and blood model. He calls Laura into his office and wraps up this initial meeting by giving her the day off to go driving in the park with him. This soon leads to an understanding that, as Brockton explains, will make life easier for Laura. She's rewarded with a fine apartment, shiny limousines, expensive furs, and other beautiful things.

Meanwhile Nick and sister Peg have settled into their little house with their young son. It's a nice little life, much greater than what either of them had alone before they married. But Laura won't be included in this life. Nick makes known his harsh feelings about her lifestyle, and Laura is banished from their home.

Laura accompanies Brockton on a business trip, but he leaves her with friends in Colorado while he heads up to Montana to take care of other business matters. Reporter Jack Madison (Robert Montgomery) is another houseguest and he and Laura fall in love at first sight. Jack pretends to believe that Laura is Brockton's secretary, but he's actually aware of the true nature of their relationship from the outset. No matter, by the time Brockton arrives Laura and Jack are already engaged to be married. Laura returns her jewels to Brockton and plans to begin a life not unlike her sister's—after Jack returns from a South American assignment.

Of course, Jack's assignment runs long and Laura's money runs out. Away from Brockton's safety net she discovers that earning a living is not as easy as she imagined. After Jack's telegrams stop and Laura's eviction notices grow nastier, she's forced to put in a call to Brockton to beg his aid. Brockton refuses to loan her any money, but does offer Laura her old place as his mistress. Not such an easy way this time.

The Easiest Way features a deep cast, also including J. Farrell MacDonald and Clara Blandick as Laura's parents, Marjorie Rambeau as her gold digging co-worker, and even Hedda Hopper in a small role as one of Laura's Colorado hosts. Gable is quite good in an early supporting role as Peg's working class husband.

After teasing higher potential at the start, the entire film focuses on Bennett and the path her character takes. Bennett's hand-holding, sight-seeing romance with Montgomery slows the pace too much at the middle. The movie only runs 73 minutes, but begins to feel like 90. Menjou's character becomes jealous, possessive, and less enjoyable later in the movie. Bennett is practically his captive by then.

Laura's romantic story is left open at the end. She is able to reclaim her past, but her future is left entirely unresolved beyond Gable's attempt to reassure her than all will be well.

A Metro-Goldwyn-Mayer film released in February 1931 in time for Valentine's Day.

Available as a manufactured-on-demand DVD-R from Warner Archive.