The following is excerpted from Variety's review of Pershing's Crusaders, originally published May 31, 1918:

"Pershing's Crusaders," or "Following the Flag to France," is eight reels, official United States war film released by the Committee on Public Information is divided into two parts of one hour each, the first, America Preparing, and part two, The Stars and Stripes Over There ... One is impressed by the general excellence of the photography, which may be due to the fact that most of the scenes are taken in the open air ... It opens with President Wilson's address to Congress. Then comes a suggestion of the invasion of Belgium

This fifteen-minute clip appears to be the opening. About halfway through the video the credits appear and at the ten-minute mark there's a great image of a fist bursting through Germany from the bottom of a map. Then the video froze on me, so I didn't get much further.

I decided to look this one up after sorting through some of my archived images and coming across this great circa 1918 advertising card featuring John J. "Blackjack" Pershing:

And the reverse side:

Following is one of the more detailed articles I could find talking about the content of the film, at least in print large enough to read: 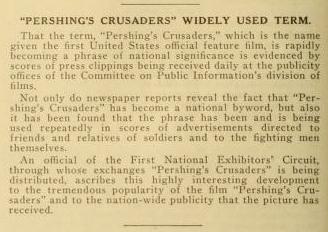 The release and marketing was not without controversy ...

A sequel, Under Four Flags, with a list of the Official U.S. War Pictures in right column. This one was released after the war was over.

Old magazine clippings used in this piece were discovered through the Lantern Search Engine.