Frank McHugh, 1977: "People think they really know me. I go along with it. It's the guy who has no hair and a crutch and who says 'I remember you when I was a kid,' that kills me." 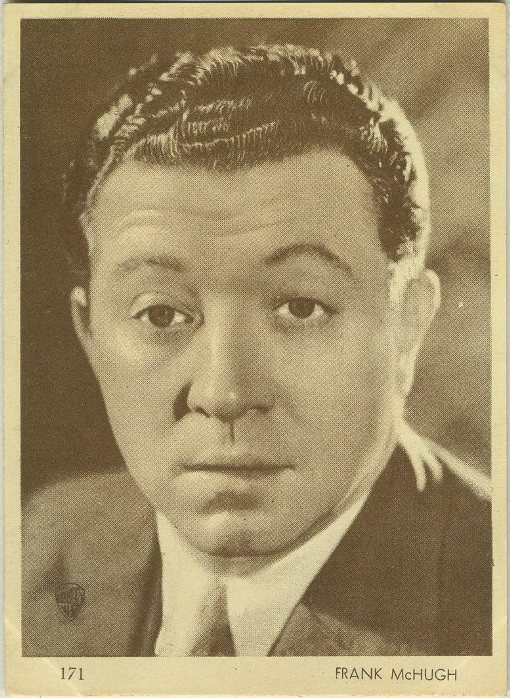 Born May 23, 1898 in Homestead, Pennsylvania, Frank McHugh. For those who love the old records, here's the McHugh family as captured on the 1900 US Census.

McHugh, 1959, on an early stage appearance cast as a villain: "That was my first and last attempt at doing a heavy. Since then, aside from occasional plays, I've never been anything other than Frank McHugh. I'm in the greatest movie casting rut of any actor in the business, simply because it's always me up there on the screen, no pretense at anybody else. If the public wouldn't accept me any other way, I figured why fight it? I've done all right without ever uttering a harsh line in a picture and I admit it doesn't bother me at all."

McHugh, 1964: "People don't realize how fast we were turning them out, and how many of them have held up through the years. No, I don't watch them on the Late Show because it depresses me to see old friends like Hugh Herbert and Edward S. Brophy who are gone now. Once in a while if it's a personal favorite—maybe I'll look."

McHugh, 1967: "Mostly I wound up as the friend—dumb but loyal. I guess my dumb look was convincing."

McHugh, 1977: "Nobody ever called me 'John.' It was almost always 'Bugs,' 'Spud,' 'Droopy,' or 'Crash.' Just once why couldn't it have been 'Charlie?' Even in Three Men on a Horse, I was 'Irwin' and the New York actors gave it the Brooklyn pronunciation, and I became 'Oy-win.'"

More McHugh '77, on old movies on TV: "There they are—exactly as if it were that very day—their voices, their mannerisms. There's Guy Kibbee, Walter Catlett, Hugh Herbert, Arthur Treacher, Joe E. Brown. All dead. It's like a postmortem. That's why I don't look for them. It's too sad."

Below, Frank McHugh obituary as published in The Miami News, September 14, 1981, page 4A. Click to open original in new tab.

Above: Frank McHugh and family. Source unknown, was found affixed to back of photo with handwritten date of December 1936.