They say Hollywood can make the unbelievable seem real. Never was this more true than when the soft spoken, intelligent son of a Swedish shopkeeper made his mark on the silver screen as Earl Der Biggers’ classic Hawaiian/Chinese detective, Charlie Chan. Despite his lack of Asian heritage, Warner Oland became known for portraying a slew of Asian characters and remains a Hollywood icon decades after his untimely death.

Johan Verner Ölund came into the world in the idyllic little village of Nyby, in the Bjurholm parish of Västerbotten County, Sweden. His father, Jonas, was a shopkeeper and his mother, Maria, a housewife. The family moved to the United States when Johan was thirteen and settled in Boston where the boy learned to speak English along with his native Swedish. By the time he was a young man, he had developed a love of theater and in 1906 he joined a traveling troupe led by the actress Alla Nazimova.

The experience not only helped to pad his growing resume, but also allowed him to make the acquaintance of playwright and painter Edith Gardener Shearn, whom he married in 1907. The two set about producing a translation of Strindberg’s works which was published in 1912. That same year, having already made his mark on Broadway, the actor – now calling himself Warner Oland – made his film debut in the silent adaptation of Bunyan’s Pilgrim’s Progress. He didn’t catch on right away and it was a few years before his next film appearance, in The Romance of Elaine (1915).

With a unique, sinister look and training as a Shakespearean actor, he was soon in demand playing villains and ethnic roles.

In 1919 he appeared in The Lightning Raider as the evil Wu Fang – his first portrayal of an Asian character. Over the next decade or so, he would appear more than 30 films, mostly in character roles. He became part of history when he portrayed Al Jolson’s cantor father in the screen’s first talkie, The Jazz Singer (1927).

The birth of the sound age coincided with Oland’s emergence as an apt portrayer of Asian characters. He took up the challenge of Sax Rohmer’s evil genius in The Mysterious Dr. Fu Manchu and a franchise, as well as a Hollywood icon, was born. He made two more Fu Manchu films, The Return of Dr. Fu Manchu (1930) and Daughter of the Dragon (1931). Though the Fu Manchu character was killed off in Dragon, Oland was just on the brink of creating his most famous character of all.

When Twentieth Century-Fox decided to bring Der Bigger’s sage detective Charlie Chan to the big screen, bowing to Hollywood’s reluctance to cast Asian actors in lead roles, they turned to Oland instead. 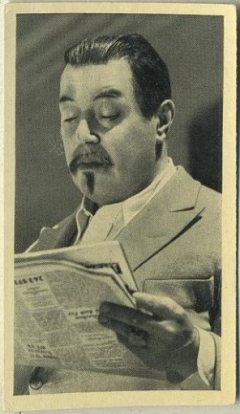 Though the Chan character had been portrayed on film three previous times, it was Oland’s debut in Charlie Chan Carries On (1931) which put the detective squarely on the map. Over the next six years there would be sixteen Chan films produced, including Charlie Chan’s Chance (1932), Charlie Chan’s Greatest Case (1933), Charlie Chan in London (1934), Charlie Chan at the Circus (1936) and Charlie Chan on Broadway (1937).

Though the Charlie Chan franchise was a hit with audiences at the time, it has come under much scrutiny since then for the blatant bigotry of its casting. Oland himself was criticized for his Pidgin English dialogue, but such was the respect that he garnered among his colleagues, he was defended by his costar Keye Luke. Luke explained that the extremely intelligent and well read Oland had actually spent quite some time studying Chinese culture and interpreted the character as a thoughtful man who had to form his ideas in one language and then communicate them in another, thus accounting for his halting speech.

While making his name with the Charlie Chan films, Warner Oland found time to appear in several other films as well, including Drums of Jeopardy (1931) and Bulldog Drummond Strikes Back (1934). He also made another unique mark on film history, becoming the first actor to portray a werewolf on film in Werewolf of London (1935).

Oland looks up to Henry Hull in Werewolf of London

Though signed to make three more Chan films in early 1938, Oland instead spent the first part of the year in the hospital with respiratory problems. Charlie Chan at the Ringside, which had begun filming, had to be reworked and emerged instead as Mr. Moto’s Gamble with Peter Lorre in the title role.

His health fragile from a lifetime of drinking and smoking, after his release from the hospital Oland decided to take a brief break and traveled home to Sweden with his wife. While on the trip, he contracted bronchial pneumonia. With his lungs already weakened by emphysema, the latest infection was too much for him to take and he died in a hospital in Stockholm.

Though the Charlie Chan franchise would continue on without him, his mark would forever linger over the character and the industry. Despite benefiting from one of Hollywood’s uglier practices, he always plied his trade with great care and a well honed understanding of his characters and their unique ethnic background. In many ways, he was very much the personification of Charlie Chan – soft spoken, intellectual and keenly wise. He may have made his mark quietly, but Warner Oland left behind a legacy that speaks quite well of him indeed.

Susan M. Kelly is a freelance writer who lives and works in Dunellen, New Jersey. Susan is a regular contributor to The Movie Profiles & Premiums Newsletter.