I sat down Sunday night ready to put together my review of The Patent Leather Kid (1927), but I just wanted to check on one or two items before beginning my first draft.

The first of those was Molly O'Day, the fifteen-year-old (maybe) co-star and love interest to Richard Barthelmess in the film. Molly was born Suzanne Noonan on October 16, 1911 (maybe) in Bayonne, New Jersey. Her big sister was Sally O'Neil, who I've bumped into once before as an Irish maid trading barbs with Regis Toomey in Murder by the Clock (1931). 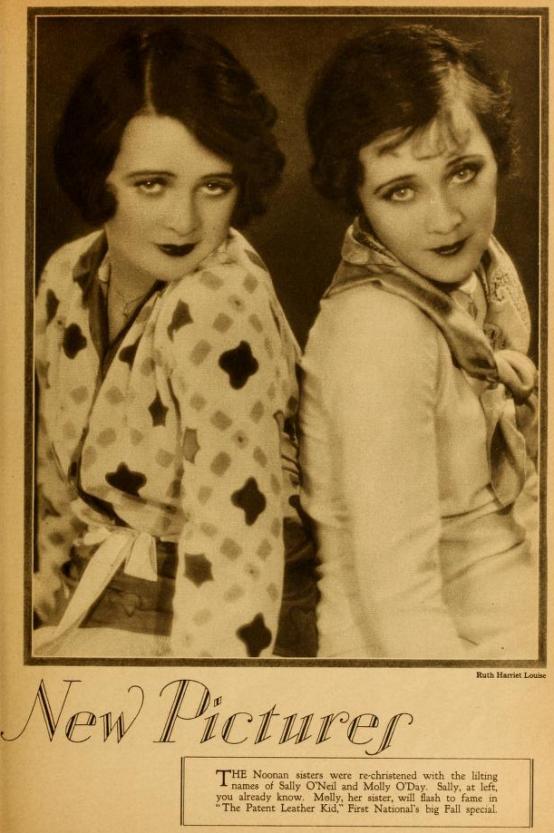 While Wikipedia lists a short, 45 Minutes to Hollywood (1926), as Molly O'Day's screen debut, the IMDb credits The Patent Leather Kid as her first work. Her 1998 Los Angeles Times obituary adds that after Molly's arrival in Hollywood she was, "Hired by director Hal Roach for the 'Our Gang' shorts when she was a schoolgirl, O'Day worked in comedies with such stars as Stan Laurel and Oliver Hardy.

But when did that happen? Those credits aren't on her IMDb page, despite that little trivia note up by her name:

The key title is 45 Minutes to Hollywood, that short that Wikipedia (correctly) listed among Molly O'Day's credits. You'll note that Sally O'Neil was supposedly billed as Sue O'Neil in that title, as well as several others. I didn't spot any Our Gang shorts among those Sue O'Neil films, but they are all Hal Roach shorts.

It's going to take a heap of work, but I feel pretty positive that all of those Sue O'Neil credits belong on Molly O'Day's IMDb page and not mixed in among sister Sally O'Neil's credits.

Moving to the contemporary sources, here's an item from Photoplay, April 1927, pages 44-45. The print is tiny, but I've typed it out below the clipping to spare your eyes:

"Much ado about the selection of a name for First National's newest home-grown Celtic starlet. When she comedied about the Hal Roach lot she answered to the name of Sue O'Neil. First National signed her and under their direction she became Kitty Kelly, which brought a thundering telegram from a New York actress who objected to sharing her birth name. The latest concoction is Molly O'Day. And what, in the name of St. Patrick, is wrong with the moniker her parents gave her—Suzanne Noonan?"

"This 17-year-old youngster has been placed under a long-term contract by 1st N., and with it came a third change of name."

Maybe the old magazines are the ones confusing the sisters, not the modern websites? Here's a bit from Picture Play, November 1927, page 55:

That one reproduced large enough to save me the trouble of typing, as did the following excerpt, also from Picture Play, March 1926, page 26:

Just for a little context, the above was referencing guests at a party Hal Roach was throwing. It places sisters Sally and Sue in the same place at the same time. There's no Molly O'Day because she's still Sue O'Neil. Even with the extra "L," which only adds to the confusion.

Following is an excerpt from an August 30, 1933 column by Harold Ballew that appeared on page 7 of the St. Petersburg Times:

I included that one just to show that the story remained the same: Molly O'Day, not Sally O'Neil, began as Sue O'Neil. Makes sense since Molly's given name was Suzanne.

Returning to Molly O'Day's L.A. Times obituary: "Only 16, she defeated 2,000 contenders in an audition for the tough girl heroine in the 1927 prizefighter movie The Patent Leather Kid."

Well, I'm pretty sure they got the age right. Because Molly O'Day, whose date of the birth the IMDb and Wikipedia agree was October 16, 1911, does appear as the youngest member of the Noonan household on the 1910 census. That would have been taken well before October 1911. Just above Molly/Suzannah's name is two-year-old Virginia, who later became known as Sally O'Neil.

As for the 2,000 contenders, that's likely some old publicity that stuck.

Back in October 1926 Dorothy Mackaill was announced as Richard Barthelmess' co-star in The Patent Leather Kid. Publicity shots of Mackaill in the old fan magazines routinely associated her name with the coming film. Then Mackaill balked at doing a film opposite Jack Mulhall. Photoplay reported "she refuses to work unless they give her a story she likes," further noting Mackaill's disappointment over Barthelmess choosing a younger girl to play opposite him in The Patent Leather Kid.

Variety seems to sum everything up in this January 12, 1927 piece that appeared on page 4. More tiny text, a bit longer than the others, but I've still transcribed for you below:

"When Miss Mackaill arrived from the east, she was assigned to play opposite Jack Mulhall in See You in Jail, but told the studio folks she would do no such thing. She declared she had come out to play opposite Richard Barthelmess in The Patent Leather Kid and would not work in the other picture. John McCormick, western production manager, is said to have tried to temporise with Miss Mackaill but she refused to report to work when See You in Jail was started.

"Alice Day has been signed to play opposite Mulhall, while Miss Mackaill is the recipient of a notice from First National's attorney stating that as she has refused to obey instructions, her salary has automatically stopped until she will. With First National having nothing for Miss Mackaill at present her services are being offered to other producers as a rental basis.

"Sue O'Neill, sister of Sally O'Neill, has been chosen for the Barthelmess picture. First National is going to professionally name her Kitty Kelly.

"Miss O'Neill was signed from the ranks of extra players by Ivan Kahn, who also discovered her sister."

All of the above were clipped from searches of the Lantern search engine, except the newspaper piece spotted through Google News.

It's bits like this that make me glad I've gone to the daily format for briefer entries—I don't have to try to squeeze this into my Patent Leather Kid review, and you can see what kept me from posting this on the day I had planned. That review should now mail to subscribers Tuesday morning—as long as that second item that I wanted to look into checks out cleaner than this one!