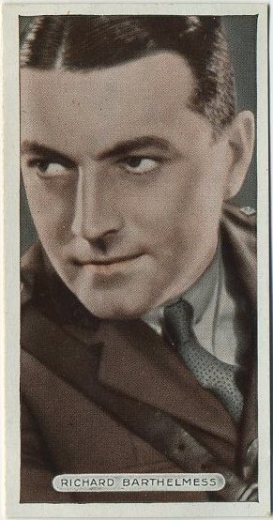 Richard Barthelmess was born on May 9, 1895 in New York City.

A favorite, who I've barely touched upon on the site. I've reviewed Barthelmess in The Last Flight (1931), but that's all to date.

My first thoughts of Barthelmess are always as the youthful action hero leaping across the ice to save Lillian Gish in D.W. Griffith's Way Down East. That was 1920. Next my mind turns to Barthelmess as the despised pilot seemingly beyond redemption in Only Angels Have Wings, where Cary Grant was his boss and Rita Hayworth his wife. That was almost twenty years later, in 1939. But my favorite Barthelmess is the awkward version of those early '30s talkies, an everyman who doesn't seem loaded with personality, yet excels as the veteran with the damaging morphine habit in Heroes for Sale (1933), or as cocky Chief Joe Thundercloud, the Native American who's not only lost, but cashed in his roots in Massacre (1934).

He's an actor who grows on you over time, especially as he ages into talkies. He had an awkwardness about him that worked especially for his war-damaged characters such as those of Heroes for Sale or The Last Flight. He can seem stiff the first few times you see him and he often comes across as a bit of a wet blanket. But the more you watch Barthelmess the more his almost polite formality begins to reveal itself as an unusual sensitivity.

For more about his life and career here's a link to his 1963 UPI obituary, which includes more detail than I had expected.

Family Search carries several early genealogical bits of interest including a text summary of Barthelmess's 1895 birth, as well as copies of the 1900 census, his 1917 draft registration, and a 1919 passport application—each of those last three contain links to view the actual documents, free on this particular site.