Many thanks to Classic Movie Daily subscriber Bob Nardone for sharing a bit of origin information about a popularly collected vintage set. Bob recently invited me to join his Facebook group Stars of the Silent Film and early Talkies, and by recent I mean this week—membership has already paid dividends through his posting of the following ad from a 1916 edition of Motion Picture Magazine: 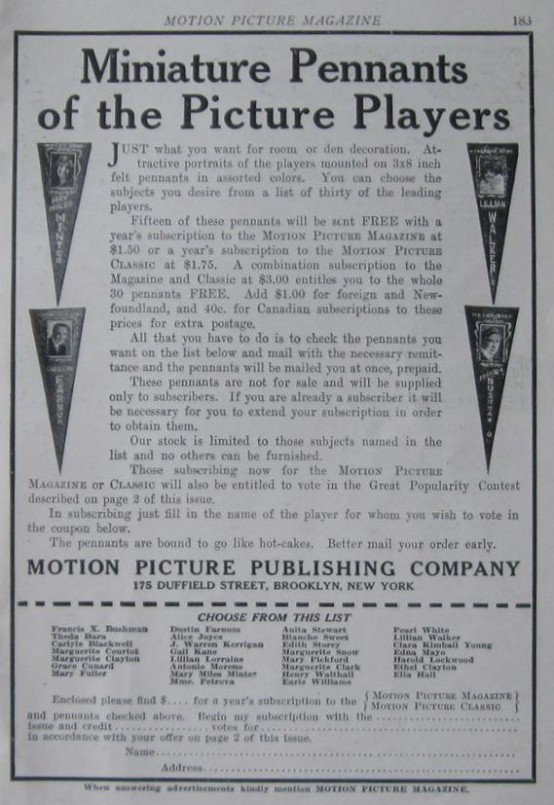 The offer is for delivery of 15 different pennants with a one-year subscription to either Motion Picture Magazine (at $1.50) or Motion Picture Classic (at $1.75). If you subscribe to both magazines (at $3.00), they'll send along a total of 30 pennants!

The same Lillian Walker pennant is pictured at the top right of the Motion Picture Magazine advertisement.

I have several others pictured on a gallery posted to the old legacy part of the site with a checklist of over 100 different pennants listed below the images. You'll find that page here: http://www.things-and-other-stuff.com/movies/ephemera/1915-felt-pennants.html

As noted on the gallery page, I'd suspected they'd been issued by Ferguson Bakery since they are so similar in size and appearance to the 1916 BF2 baseball issue.

It is possible that somebody else created the movie star pennants and simply distributed them through the magazines.

Bob's find sent me to the Lantern Search Engine to see if I could find more about the movie pennants, and sure enough I did. Here's a similar ad from the February 1916 edition of Film Fun magazine offering 24 of the pennants for a one-year subscription (or five for a three months subscription): 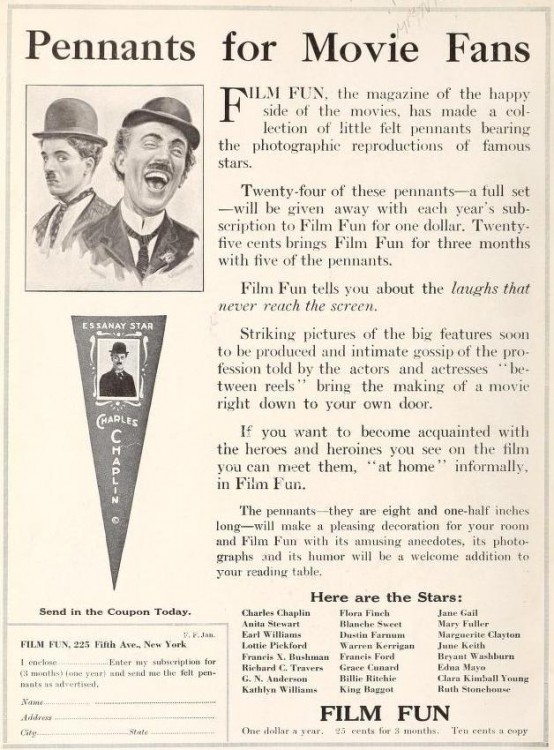 While there is some crossover, the Charlie Chaplin pennant so prominent in the Film Fun ad is not mentioned in Bob's Motion Picture Magazine ad.

I haven't run across any of the larger-sized pennants myself, but they once again seem similar to the baseball pennants, matching the Grover Cleveland Alexander at the center of this find.