A look at several clippings originally published in The Hollywood Reporter (with one exception) between January and May of 1934 that show how closely tied the two MGM classics Manhattan Melodrama and The Thin Man were during production. The clips also provide a timeline for William Powell's move from Warner Bros. to MGM. Dates and page numbers listed below each clipping with apologies as these are full size:

January 18, 1934, page 3. Streets of New York is the story that will eventually be Manhattan Melodrama.

February 8, 1934, page 6. Powell is still working for Warner Bros. Kay Francis soon dropped out of The Key and Edna Best was brought in to take her place. 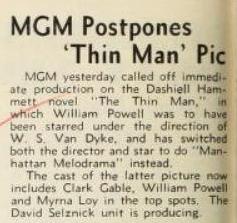 March 2, 1934, page 4. This is the key clipping on the page. After I saw The Thin Man was delayed for Manhattan Melodrama I became curious over the more exact timeline of the two films.

Also March 15, 1934, page 2. Apparently the title of Arthur Caesar's story was changed from Streets of New York to Three Men. 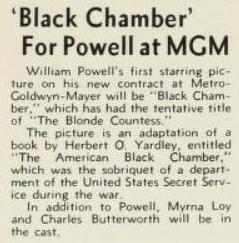 Back to The Hollywood Reporter once more, same date, May 23, 1934, page 1, for mention of Powell's "new contract at Metro-Goldwyn-Mayer." This eventually became Rendezvous (1935), which Powell starred in with Rosalind Russell, not Myrna Loy.