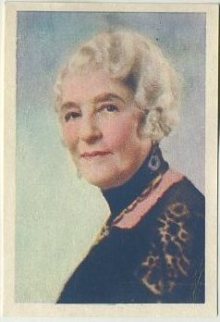 I thought she'd make a fun subject to hunt down in the old newspapers, especially if I limited myself to 19th Century papers. I sourced these through the Old Fulton NY Post Cards site, which is really tops when it comes to free newspaper databases. Unfortunately, because of how some of the pages load it is impossible to label them with a precise date, though in those cases the address of the page at least gives away a year or range of years. If any of the cities or titles sound unfamiliar, these are all New York (city and state) issued papers.

First, a shot of Miss Robson in her most beloved film role, as Apple Annie in Lady for a Day (1933), and then on to the old newspapers:

Did you think I had a photo from this film without Warren William?

Brief mention of Robson's real name. Found in an 1892-94 edition of the Weekly Aubernian.

I apologize if any of these are difficult to read—they did a number on my eyes too! I did try to present them at a size that I found most comfortable. I mention this because the following is the best, and lengthiest piece I found discussing Miss Robson's background. It's from another issue of the Aubernian, same date range, 1892-94: 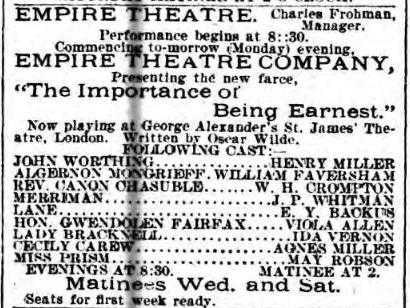 Here's May Robson listed at the bottom of the cast in that new thing by that Oscar Wilde fellow, The Importance of Being Earnest. Discovered in the New York Herald, April 21, 1895 edition. 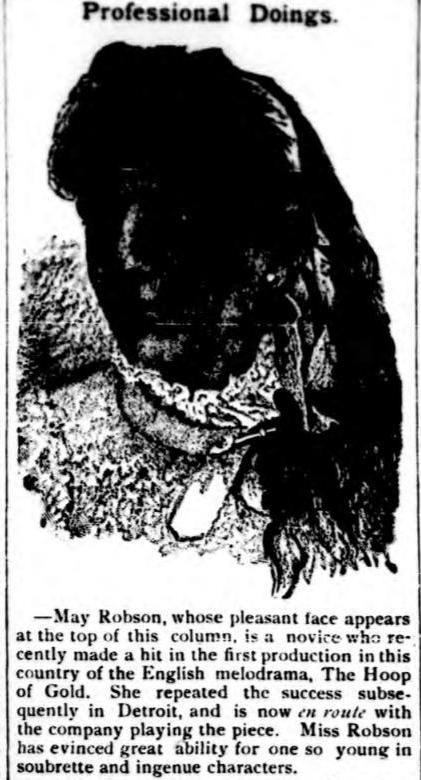 Here's the earliest photo I could find of May Robson—of course the quality is about as bad as can be. It's from the New York Mirror, an issue dated sometime between 1882-84.

Cheating away from the papers—and the 19th Century—for a moment, here's the oldest collectible image I have on hand of May Robson. From a 1908 deck of theatrical playing cards. 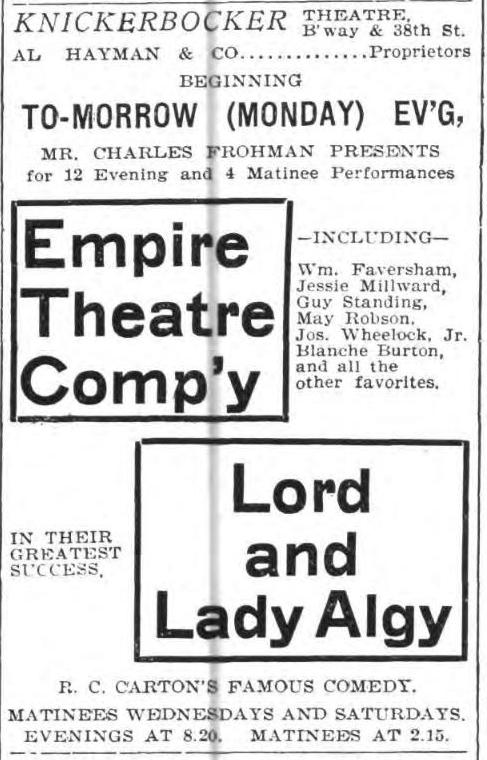 This ad for Lord and Lady Algy isn't thrilling, but the page was. A couple of items unrelated to May Robson follow. Found in the Sunday Telegraph, October 15, 1899. 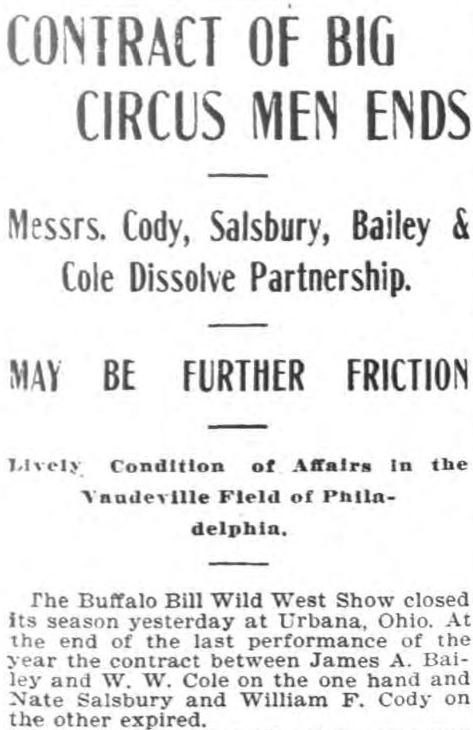 Found on the same page of the 1899 Telegraph issue mentioned above, this headline (and opening paragraph) mentioning some of the big circus people of the day. 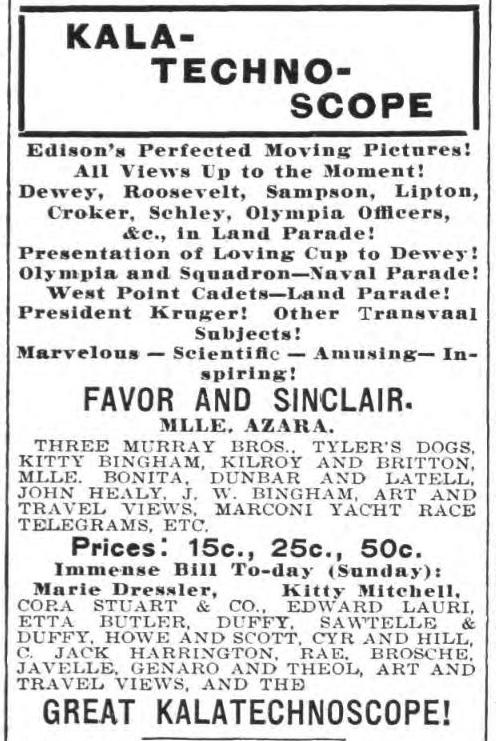 Even better, from that same 1899 Telegraph page, this ad for Edison's Kalatechnoscope, his "perfected moving pictures," including a listing of the attractions being shown. Robson's later screen contemporary Marie Dressler mentioned at bottom of ad as one of several live performers on the bill that Sunday. 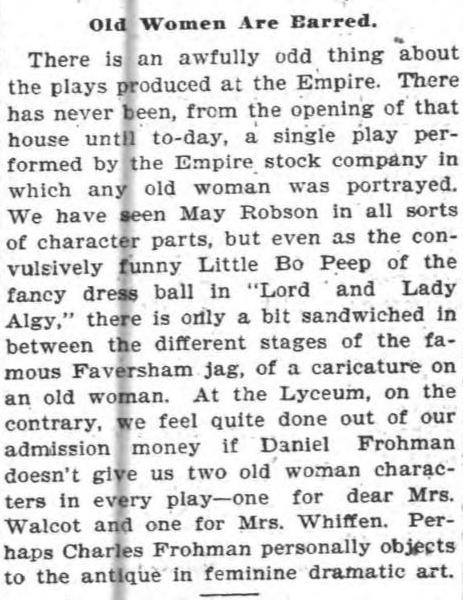 Back to May Robson, apparently she was playing "Little Bo Peep" in Lord and Lady Algy. From the Morning Telegraph, March 18, 1899. 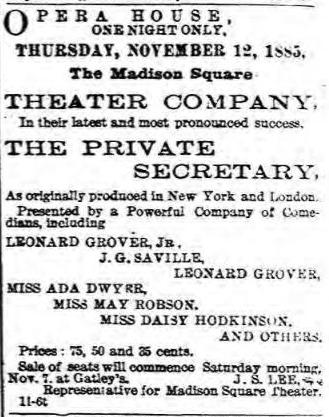 An 1885 ad from the Rome Daily Sentinel listing Robson in the cast of The Private Secretary.

This "artificial leg" gag stuck to Robson for awhile. This mention from the Evening Post, April 4, 1893. 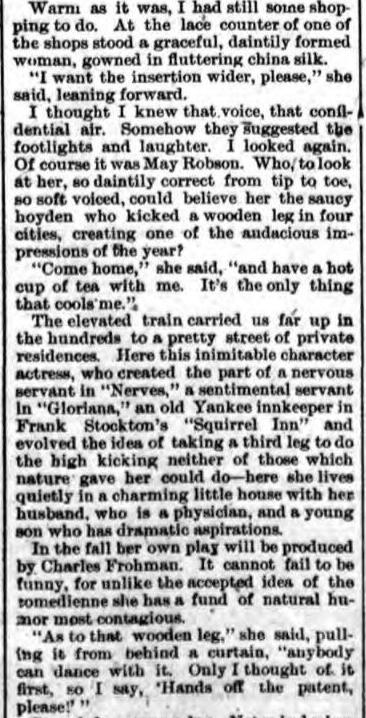 Another mention of Robson's "wooden leg" in this humor piece from the Cortland Standard, August 4, 1898. I found many articles written in a similar tone. Intended to be humorous in their day, but of very little substance. So we'll end it there. 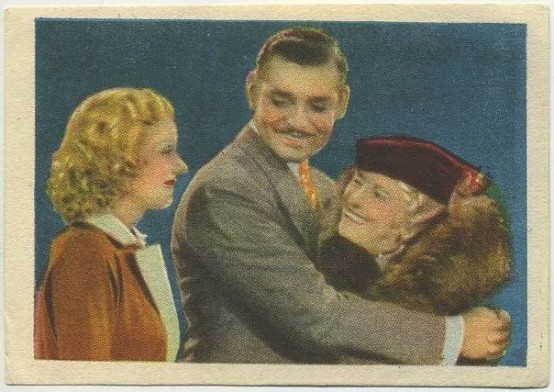 Jean Harlow, Clark Gable, and May Robson in Wife vs. Secretary (1936) 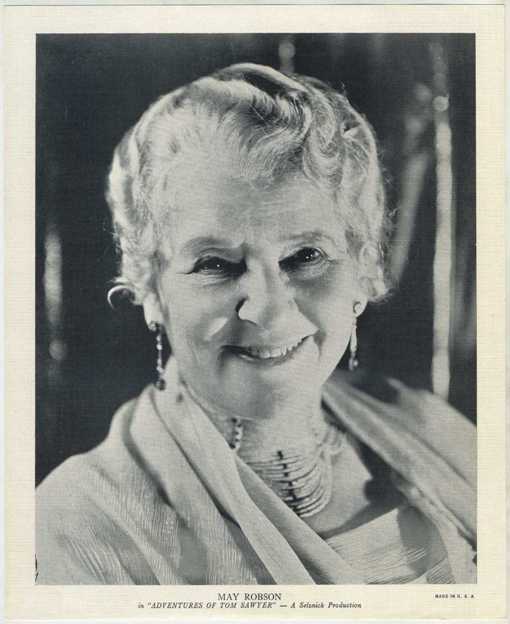