Above: Adrienne Ames and Bruce Cabot in Disgraced!, released July 7, 1933.

"My real name is Jacques de Bujac, which, of course, wouldn't do. Mr. Selznick suggested John Bruce or Charles Cabot, and I said: 'Why can't it be Bruce Cabot?' So we settled on that and I've been Bruce Cabot ever since—but not legally. I'm still Jacques de Bujac."

"Ruth McClure, daughter of a Fort Worth, Texas, gas station operator, wed at sixteen and a year later produced a daughter. At age eighteen Ruth won her first divorce. The lovely young girl migrated to Hollywood ... as Adrienne Truex, was seen briefly in Marilyn Miller's Sally (1929). Adrienne met and wed millionaire-broker Stephen Ames ... who accepted their good friend Bruce Cabot as her escort while he was frequently out of town. On September 15, 1933, Adrienne left for Reno, Nevada, to divorce Ames and there announced her intention to wed Bruce." 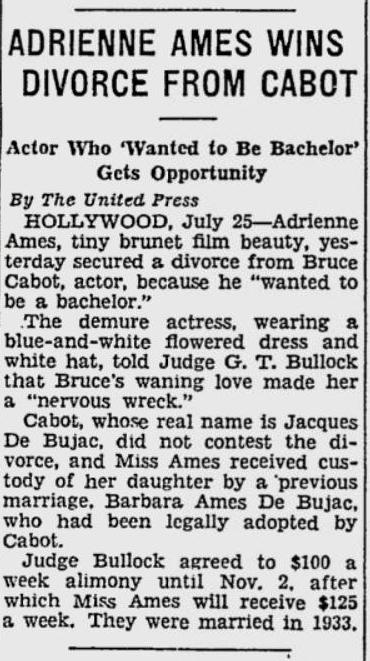