John Gilbert is arguably one of the biggest and most memorable names from the silent era, especially on the male front – the silent era was really a time for the leading lady divas to shine. But for every femme fatale, girl next door or vamp there was also a cowboy, a swashbuckler, and a gentlemen to make the ladies swoon. John Gilbert did a phenomenal job of standing alongside the likes of Douglas Fairbanks and Rudolph Valentino as a heartthrob of a generation and a maverick of the new medium of film.

John was born John Cecil Pringle on July 10, 1897 in Logan, Utah. His family was unorthodox, which is merely another way of saying that with some, the world of show business, entertainment and entrepreneurship runs in the family.

John’s father was a performer of the comedic arts with a company named after him: the Pringle Stock Company. From the time John was a little boy – in those first years of the cinema itself – he grew up watching people strut their stuff on stage. After finishing school, he was ready to delve into the career he knew so well, and already loved. In 1915 he landed a gig as an extra with Thomas H. Ince’s movie company.

Beginning as an extra was par for the course in those days, and extras had a lot of work, since most films made were shorts and they were being churned out at breakneck speed. It therefore didn’t take long for some of the more notorious or noteworthy to get noticed. Within two years, John was a leading man. He was uncredited in most of his earliest work, though he worked prolifically, making 13 films in this first two years as a moving image actor: some of these lost gems include Matrimony and Aloha Oe (1915), and The Corner, The Last Act, The Aryan and The Phantom (1916).

In addition to his growing charisma on screen – which rapidly brought him centre stage – he also distinguished himself another way: by being a true jack of all trades.

It’s hard to think about now, in an age of extreme duality – the art film versus the Hollywood blockbuster – but the two were completely merged in the early years of cinema. Storytelling was an ancient art coming from an oral tradition, but it also readily found an accessible outlet in the moving image industry. The people making the earliest movies were technical experimenters as much as they were storytellers; what could be more artful than D.W. Griffiths discovering the close-up, for example? This endemically cinematic storytelling device is the perfect example of a craft being done artfully.

To say that John Gilbert was a craftsman, then, is a high compliment. He was interested in the movies from all perspectives; in addition to writing, he assistant directed and wrote scripts. He also directed a couple of films (1921’s Love’s Penalty and 1927’s Love, based on a Tolstoy work, which he co-directed and in which he also starred).

True fame in the grandest sense came to John in 1919, after he’d been playing leading roles for a couple of years. Among his first films to bring him acclaim are: The Bride of Hate, The Dark Road and Happiness (1917); Wedlock, Doing Their Bit, The Mask and The Dawn of Understanding (1918); and The Busher, The Man Beneath, For a Woman’s Honor and Widow by Proxy (1919). His career began to get better and better; with each film he was becoming more of a household name. Around this time, the same good fortune was being bestowed on many of John’s contemporaries and the industry itself was starting to get robust. The studio system that is so legendary today was just being born; and they needed their stars to be born alongside them.

In 1921 Fox Pictures came calling, and John signed a three year contract with them. In those days it was standard practice to get locked into contracts with studios, whereby you couldn’t work for anyone else unless the studio gave them permission (or, in some cases, “swapped” stars). The Fox deal worked out splendidly for John, who continued to get more and more famous. 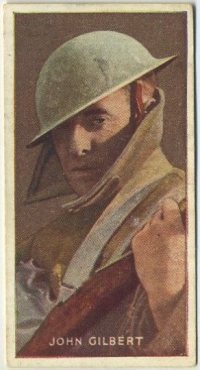 His roles varied; he could be a great villain with his smoldering eyes and mischievous look, or he could play the debonair leading man; the latter is the direction Fox moved him into. Some films from this era: Shame and Ladies Must Live (1921); Arabian Love, The Yellow Stain, Monte Cristo and A California Romance (1922); While Paris Sleeps, Truxton King and St. Elmo (1923); and Romance Ranch and He Who Gets Slapped (1924).

In 1924 John moved over to MGM, another giant of the early, silent era studios; his first film with them was His Hour, directed by one of the most famous directors of his day, King Vidor.

He continued to be enormously successful, and made one of his best known films in 1925, The Big Parade, another seminal King Vidor film, and an early war epic. That year, he also did The Merry Widow (co-starring Mae Murray and subject of another article I wrote for these pages when this beautiful film was re-struck and screened at the Toronto International Film Festival). In short, John Gilbert was at the top of his game, and one of the biggest box office draws in town. In fact, when Valentino tragically died in 1926, John Gilbert was officially the most famous man in the movies.

In 1926, he made the film Love, mentioned above, with the one and only Greta Garbo. They developed a romance that goes down in history as one of the most scandalous, torrid and fascinating in movie history. They also co-starred in 1926’s Flesh and the Devil and 1928’s A Woman of Affairs.

What their romance didn’t have, the studio provided it for them; they were out to ensure that everyone in the world knew about this couple – and of course the movies they were making. And so it came to the big wedding; maybe the biggest wedding that never was. Greta Garbo left him at the altar, and this devastated him profoundly.

In some ways this was the beginning of the end. His on-screen charisma began to wane, and he also developed a drinking problem. And of course, we were now entering the dreaded sound age, the amazingly fertile new era for movie craftsmen and artists alike, but a nightmare for those who thrived in the silent era. John never effectively made the transition; his voice just never seemed to match his image. The roles he was given, for example, in Redemption and Way for a Sailor (1930), cast him as the bad man, the instigator of negativity rather than the swoon-worthy victim of circumstance. The tides were turning for John Gilbert.

He was still tied to his MGM contract, but they weren’t that interested in helping him revive his career – they’d had a falling out over Garbo, and Garbo essentially won (she’s far more memorable today than John Gilbert, as we can see). He made a last film with them, 1933’s Fast Workers, and his contract wasn’t renewed.

Whether it was guilt or actually love, Garbo wanted to help him. She demanded that he co-star with her in one of her best films, Queen Christina (1933), and he did, but he’d lost favour with the public and was spiraling down into self-destructive behaviour. He made a last film in 1934, The Captain Hates the Sea, and officially retired. He died in on January 9, 1936 in Los Angeles of heart failure.

It’s impossible to ever tell the whole story. There is always more. He was actually married four times, lastly to Virginia Bruce between 1932 and 1934. He was a true icon, appearing on commemorative stamps in 1994 along with stars like Charlie Chaplin and Harold Lloyd. At his peak he was earning $250,000 per picture. John Gilbert is a legend in the pantheon of silent cinema and it is strongly encouraged that some of his masterworks – still available for viewing today – be sought out.