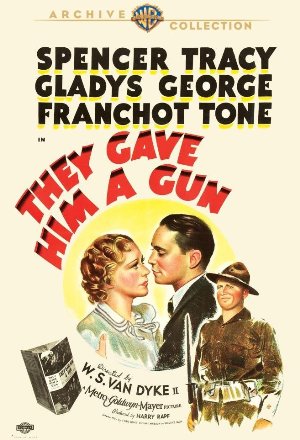 They Gave Him a Gun is half war movie, half gangster movie. It’s split about as evenly as can be with the genre switch coming when the date November 11, 1918 floats across the screen at the 46-minute mark of the 94-minute movie. Those 94 minutes unite to show how the Great War changes a small-town “hayseed” from peaceful bookkeeper to cold-blooded killer, and how the lack of greater opportunity in peacetime America kept him killing. The otherwise always refined Franchot Tone is miscast as the hayseed and his conversion to killer is sloppily handled, but once his character loses all innocence he’s much more convincing.

The three main players, Spencer Tracy, Gladys George, and Tone are the entire movie. Character actors Edgar Dearing and Mary Treen get to do more than they usually do, but that doesn’t amount to much on the whole. The rest of the supporting cast are little more than bit players. That goes for Cliff Edwards, who I’ve never seen used so little. Luckily the three main players are very good, especially Tracy and George, who are better than the material. Tone is good too, but he’s handicapped by the extreme swings of his role. It’s the key character in the story, the entire movie moves ahead based on what Tone does, and none of it is subtle.

Tracy plays Fred Willis, a cocky circus barker who's seen it all, and Tone is Jimmy Davis, a meek small-town bookkeeper, who has never been further from home than Niagara Falls one Arbor Day. They bond in basic training and wind up best pals when they’re shipped to Europe for battle. Jimmy is a sensitive youth who cracks a bit too easily during basic training and then crumbles in the heat of battle. He pulls himself together in time to emerge a hero, but in doing so Jimmy begins down a killer’s path.

Above: Spencer Tracy and Franchot Tone.

Gladys George is Rose, a wartime nurse who gives all of herself to heal Jimmy while falling in love with Fred. When Fred goes missing and is presumed dead, she accepts Jimmy’s proposal. Fred turns up and is shocked to realize he has lost Rose to his best pal. “I hope I die before I ever make Rose unhappy,” Jimmy tells him. Realizing how much Jimmy loves Rose and how much more his fragile friend needs the love a good woman, Fred makes the ultimate sacrifice and spurns Rose for the love of Jimmy.

The war ends and Fred, now running a circus, bumps into Jimmy outside of a building in New York. There’s a bit of commotion surrounding them because a man was just gunned down in a car parked in front of the same building. After exchanging greetings Jimmy gives Fred his card and tells him he should stop by, Rose would love to see him. Fred, not wanting to face Rose again, tears the card up after Jimmy leaves. In a whopper of a coincidence the boys' old Sergeant happens to be a policeman looking into the shooting that happened in front of the building. Sgt. Meadowlark (Dearing) explains the murder had to happen from several floors above ground and adds, “I ain’t seen anything like it since France.” Fred puts his foot over the torn pieces of Jimmy’s calling card because both he and Meadowlark know what a skilled sniper Jimmy became in France. After Meadowlark leaves Fred picks up the pieces of the card and decides to call on Jimmy and Rose after all. 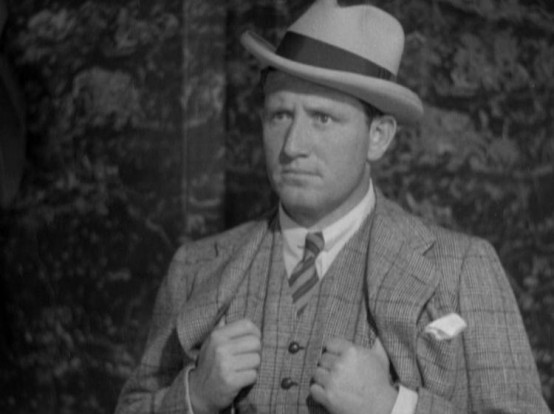 The rest of the film is filled by confrontations between all three characters: Fred confronts Jimmy, Fred confronts Rose, Rose confronts Jimmy, and Jimmy pays a price. Finally, Jimmy tracks down both Fred and Rose in a climax that plays beyond expectations, at least at first, and settles all of the movie’s questions about right, wrong, and romance.

Above: Spencer Tracy and Gladys George.

My biggest problem with They Gave Him a Gun come in a couple of key moments, moments which change the characters and by extension the entire trajectory of the movie. The first of these comes towards the beginning when mild-mannered Jimmy turns killer. The second comes midway through the film when Rose confronts Fred at the bar and is too blind to see he's acting obnoxious on purpose in order to push her to Jimmy. One moment Rose asks, “What’s this big act all about,” and then next she tells Fred that he’s dead to her. Jimmy’s turn to killer happened with just as little subtlety. He passes out because of his Sergeant's graphic battlefield descriptions and wakes up to find Fred handing him his rifle and reassuring him, “As long as you got one of them, you’re as good a soldier as anybody.”

That's all it takes and it's like a switch is thrown. Both moments are concocted to move the story forward as conveniently as possible and both fail at providing any reason for the character’s subsequent actions except that this is what the writer told them to do. Together they broke this movie for me.

I was back on board during the sniper sequence, which was so good that it alone could have served as the incident inspiring Tone to embrace the violence of warfare. While I thought the second half of the movie was better, this earlier moment provided my favorite scene. Tone slips into a dilapidated building to avoid gunfire and screams in terror upon noticing a German soldier perched on the floor above with his weapon aimed at him. The enemy makes no response to Jimmy's screams, which stop once he realizes the German is dead. Jimmy pulls himself together and heads to the top level of the building from where he can look down on the German machine gun nest that's been keeping the American forces at bay. Jimmy is excited by the sitting target and calmly picks off the enemy soldiers one by one. After each German falls, another slides right into his place and you can almost hear director Van Dyke thinking, just like ducks in a shooting gallery. After killing four enemy soldiers the fifth and final machine gunner raises his hands in surrender. Jimmy takes out the target. No backstory required, this scene alone works in showing Jimmy's change. A button had been pushed and he responds in the extreme out of fear and desperation. His actions in the moment went too far, yet they could be explained by the chaos of war. And we can buy that going forward, Jimmy is a victim as much as he is a madman.

But then Jimmy is hospitalized and the pacing of They Gave Him a Gun is obliterated by Tracy’s romancing of Gladys George. The scenes worked in and of themselves, but taken as a whole, the first half of the movie is up, down, and all around.

While Tracy and George masterfully underplay during the entire film, Franchot Tone’s time to shine comes during the second half of They Gave Him a Gun, when the soldier turns gangster. He and Tracy share several well-played moments as Tracy’s Fred is so stunned by what Jimmy’s become that he allows his formerly naive protege to spread his wings before him. Tone’s words are friendly, but his demeanor becomes menacing whenever Tracy challenges him about his occupation. When Rose visits Jimmy's office he's revealed as the hard-boiled mastermind of his mob’s activity and no longer bears any resemblance to the character we met at the beginning of the movie.

Rose believes there is still some goodness in Jimmy and she pushes him to the limit to make it reveal itself. Fred is caught in between. The war made a brother out of Jimmy, who he actually loved more than Rose. He sacrificed Rose to Jimmy for Jimmy's sake more than he did for Rose's security. When he discovers what Jimmy is doing he accuses Rose of pushing him into it. Fred's love for Rose began more as a passion. He was aware of his own lower social standing back home and put her on a pedestal. He's disappointed that Rose would lead Jimmy astray, but falls for her all over again once he learns of her innocence. He still cares for Jimmy, but he's broken the promise that had made Fred step aside: "I hope I die before I ever make Rose unhappy."

Above: Briefly it becomes a prison film.

Towards the end, when Jimmy tracks Rose down at Fred’s circus, both Tracy and Tone are at the top of their game and provided a scene worthy of their talents. Tracy underplays, Tone is intense, but unfortunately Gladys George gets a bit lost between all of the testosterone. The ultimate resolution is disappointing as it's once again the easiest choice, but it's well done and it had been clear for awhile that this was how the movie was going to end.

There’s still a lot to recommend about They Gave Him a Gun. It excels in revealing all angles of the relationships, both separate and mutual, between the three characters. It includes several entertaining individual scenes. Its flaws are overcome by the acting talents that make this triangle work, but it was shaky a few times during the first half of the movie.

My thanks to Warner Archive for providing a review copy of their recent manufactured-on-demand DVD-R of They Gave Him a Gun. - Pick up your copy here. All accompanying screen captures were grabbed from my copy of that Warner Archive disc.

Best scene comes during the war portion, but the gangster bit is the better half of the movie. Some convenient turns overcome by performances of the three stars, Spencer Tracy, Gladys George, and Franchot Tone. Uneven, but worthwhile.