Donahue was born January 3, 1899. He has to be gone, right? Yes, he’s been gone awhile. And that chase led to this post.

Until this morning, a quick glance at IMDb's Joe Donahue page might lead you to believe that the 115-year-old Donahue was off cocooned somewhere planning his next feat of immortality. The page looked like this: 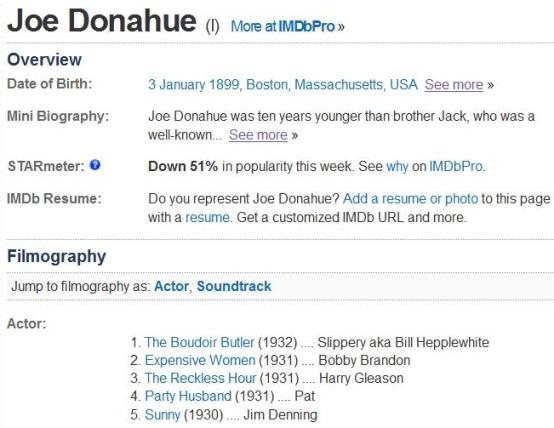 I was certain I had uncovered Donahue's 1943 obituary when I posted this biography of the performer late last year. If the name doesn't ring a bell, Donahue is best remembered for dancing alongside Marilyn Miller in Sunny (1930) and otherwise wisecracked in support during a brief Hollywood stay.

But I forgot to save the original obit file. And while a one-month pass to the Boston Globe's archives is one of the best deals out there for researchers, I can only tie up so much money in online archives. My Globe subscription had lapsed.

Enter online debunking pal and prolific Blogathon host Fritzi Kramer of MoviesSilently. I had shared my Donahue story with Fritzi when she had posted about correcting some info on another IMDb page, so Fritzi knew I wanted to fix the Donahue error. This weekend she sent me along the missing clipping from the Globe:

Unfortunately, this doesn't really tell us who this particular Joe Donahue was, or in any way confirm that it references our Joe Donahue.

Luckily, Donahue's parents are named, as they are again in his brother's 1966 obituary:

As you can see, that one also identifies Joe Donahue as a performer and both men as brothers of the more famous Jack Donahue.

Just for icing on the cake, I also submitted the summary page of Joe's birth certificate from FamilySearch.org to the IMDb. That lined up Donahue's 1899 date of birth with his parents names, even if their last name was transcribed incorrectly from the original document:

The IMDb has accepted the evidence and as of this morning, Joe Donahue has finally been allowed to die:

The IMDb and (while we're at it) Wikipedia are two of my favorite starting points for any research done on this site. Many incidents and personalities are covered as well as they have been by any mainstream source, ever. Yet, these vast and wonderful sites do sometimes present inaccuracies when it comes to more obscure subjects, especially when those subjects seemingly lost relevance prior to the Internet Age. By all means, use them for quick, unimportant research, but be sure to verify if your purposes are anything more than that.

We can leave Joe Donahue for now, and I'll leave him in our most favored place for him to get his kicks, alongside Marilyn Miller in Sunny: