In many ways, the simplest thing we can say about May Allison is that she perfectly encapsulates the spirit and parameters of the silent era of film. Her trajectory will not seem unfamiliar to anyone who has taken an interest in discovering the stars of cinema’s early years. Unlike many of her peers, she seemed to sense the changes on the horizon as technology enabled sound to enter the pictures and called it quits while she was ahead. In this way a legacy was born.

May was born on June 14, 1890, five years before the first motion picture projection to a mass paying audience; many of her peers weren’t born until a few years later. Her place of birth was Rising Fawn, Georgia, and by the time she was born she had four older siblings. Her father, John Simon (Sam) was a doctor and her mother, Nannie Virginia (Wise), had her hands full raising five children.

By all accounts May’s childhood was fairly typical; she went to school and played her her siblings and friends. But the itch to perform started when she was young, and at the age of 14, she found herself in New York making her debut on Broadway. The play was called Apartment 12-K, and evidently, she did a good job indeed. She was discovered while on those legendary stages of New York and soon found herself in Los Angeles as a new territory was being born and carved out of the hills: Hollywood. 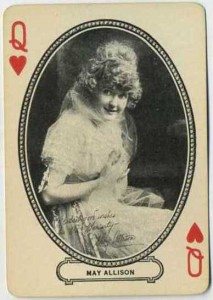 The lovely, blonde and elegant-looking May, even at her young age, was considered ever the ingénue. She began with small roles in films that made other leading ladies stars, among them Theda Bara in A Fool There Was in 1915. But May didn’t remain in the backseat for long. Also in 1915, she was chosen to play the lead opposite Harold Lockwood in David Harum, a romantic comedy that quickly made headlines as a hugely successful film. More importantly for May, the public loved the onscreen chemistry between Harold and May, and that could only mean one thing: that the two were destined to costar together for years to come (and make their bosses a lot of money).

Before Katharine Hepburn and Cary Grant, long before Meg Ryan and Tom Hanks or Julia Roberts and Hugh Grant, there were May Allison and Harold Lockwood, who arguably go down in history as the first romantic comedy “couple.” They never attempted an off-screen romance, but this didn’t stop audiences from falling in love with what they saw on the silver screen. May and Harold wowed audiences and honed their comedic craft over a period of years as they made around twenty five films together – most of them during the first World War, when there was nothing better to fuel the collective need for escapism than to go to that democratic medium of the movies to watch a couple bicker, laugh and love.

Among the highlights of this illustrious era for May are the following films: The House of a Thousand Scandals, Pardoned and The Tragic Circle (1915), The Other Side of the Door, The Secret Wire, The Gamble and The Come-Back (1916), The Promise and The Hidden Children (1917), and The Winning of Beatrice and The Return of Mary (1918).

These golden years for May ended abruptly when, in 1918, Harold Lockwood tragically died prematurely. He was one of the many millions of victims of the Spanish Influenza that ravaged the world in 1918 and 1919, taking no mercy on young and old, sick and healthy. The war, and the proverbial party, were over.

May bounced back, making many films in 1919, including: Peggy Does Her Darndest, Castles in the Air, Almost Married, The Uplifters and Fair and Warmer. However, her career never fully recovered from the loss of her significant onscreen other.

During these years, as we know, movies were churned out by the dozen, and there were plenty of roles to go around, especially for known stars who were established and had box office pull. May made film after film throughout the twenties, but this was a new era and other stars were beginning to rise higher and brighter; for every lovable ingénue there was now a flapper, a vixen, a tramp with a heart of gold. The roaring twenties brought with them a taste for burlesque, exotic lifestyles, and dark glamour.

May certainly had her charisma and ability to transform, but her ability to be deeply seductive was somewhat compromised by her well known history as Harold’s lady, the spunky woman who could generate a laugh on a dime. Some of the films from her last era of gracing the silver screen include: The Cheater and Held in Trust (1920), The Last Card (1921), The Woman Who Fooled Herself (1922), The Broad Road (1923), Youth For Sale (1924), Wreckage (1925), Men of Steel and The City (1926), and Her Indiscretion (1927).

Throughout the twenties her personal life was also fairly turbulent; she’d married actor and writer Robert Ellis in 1920 but the marriage only lasted three years. Her next marriage was to the editor of then emerging industry magazine Photoplay, James Quirk. The marriage lasted until 1932, five years after May’s last film, 1927’s The Telephone Girl, which costarred Madge Bellamy and Warner Baxter, both big stars in their own right.

May married again, to Carl Norton Osborne. The third time was evidently a charm, they stayed together for over forty years; Carl died in 1982. May bounced back and married a colonel, J.L. Stephenson, but they soon divorced. May had several homes and a fairly lavish lifestyle; she spent a lot of time, toward the end, in her home in Bermuda, where she often attended the Cleveland Symphony as a special guest. She died on March 27, 1989 at the incredible age of 99, and was buried on Ohio, not too far from her Georgian roots.

Tammy Stone is a freelance writer and journalist based in Toronto. Watch for her regular column on the greats of the Silent Screen here in The Movie Profiles & Premiums Newsletter.