You are here: Home / News - Notes / William Powell Picto-Sked for TCM Summer Under the Stars 2014

Picto-Sked returns! This is a feature that I will usually run at least a couple of times during TCM's Summer Under the Stars schedule.

The Picto-Sked below gathers the entire August 9, 2014 schedule of William Powell movies playing on TCM and illustrates each with an actual period newspaper advertisement to give a little extra flavor of the times.

Past Picto-Skeds have proved popular with readers and even though they take me almost as long to build as posts that take a bit more thinking, I do honestly get a kick out of hunting down all of the old matching ads.

The schedule following below is for movies showing on Turner Classic Movies in the US with all times Eastern Daylight Time. Any past reviews, biographies or other relevant articles that I've written will be linked within the listings.

Without further ado, William Powell day on TCM's Summer Under the Stars:

Found in the Tuscaloosa News of Tuscaloosa, Alabama, September 4, 1932, page 9.

While it did try to be a little saucy at the bottom left I found that one a little bland overall, so here's a bonus ad: 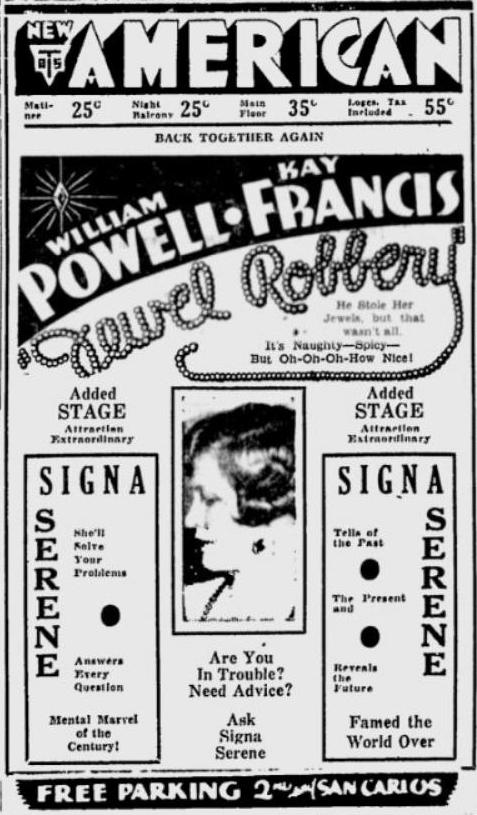 Found in the Daily Times of Beaver and Rochester, Pennsylvania, August 28, 1940, page 4.

Daffy as a daffodil?

Bonus vintage trading card, because who can get enough Asta?

Sorry, that was the best I could find -- the 1950s ads just weren't as good as the earlier ones.

No image of Powell! I've got you covered with another old trading card:

I hope you enjoy the movies!

Barring any surprises I do plan to be back tomorrow with an article about one of the Carole Lombard movies that TCM will be playing on Sunday.