You are here: Home / News - Notes / Barbara Stanwyck Day on TCM Summer Under the Stars 2014

I stepped away from a review I was working on and took a couple of hours late Monday night to clean up a (mostly) biographical post that I wrote about Barbara Stanwyck back when she was TCM's Star of the Month in December 2012. A link follows:

Barbara Stanwyck, Biographical Beginnings to Baby Face and Beyond

Tuesday is, of course, Barbara Stanwyck day on TCM's 2014 Summer Under the Stars schedule.

The Stanwyck schedule for Tuesday is varied, though weighted towards her career from 1937 and beyond. Only two pre-Code titles play Tuesday: Illicit (1931) opens the day at 6 EDT and Night Nurse (1931) plays in the evening at 10 pm. At least they are two good ones!

The rest of the schedule is surprisingly underwhelming, but I'm beginning to feel like I'm raining on the parade so you can check it out HERE and draw your own conclusions.

If you prefer the snazzier TCM Summer Under the Stars special page for Stanwyck, you'll find it HERE. 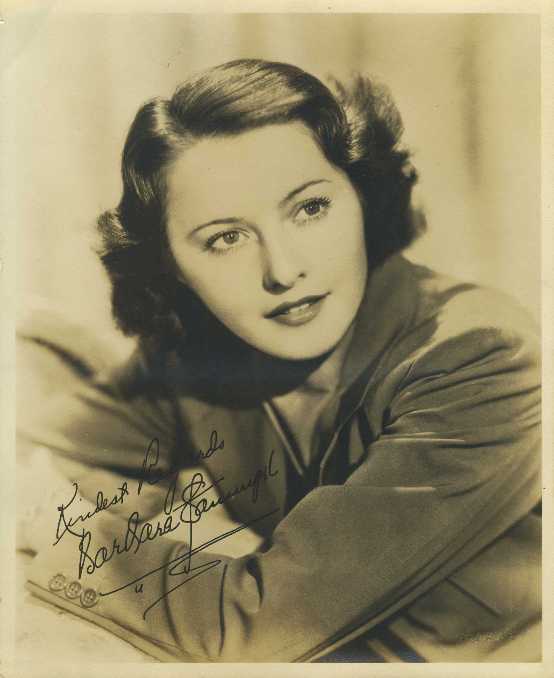 Turning lemons to lemonade, Tuesday's TCM offerings do include several lesser shown titles that may be new to fans who have only seen Stanwyck's better known work. I'm curious about the Douglas Sirk movie at 11:30 pm myself, There's Always Tomorrow (1956), which looks to be another of his soapy melodramas that I can never bring myself to turn off.

Just so you don't think I'm always so negative, I do love TCM's schedule for Paul Muni on Wednesday! (Recommendations include The World Changes Wednesday at 6 am and Black Fury at 11:30 Wednesday night.)

Once more, my 2012 Barbara Stanwyck biographical post is HERE. Besides passing along the Stanwyck alert and griping about the selections, I've tried to include some images acquired since 2012 in this post.

Enjoy the day! I'll be back with something Muni tomorrow.

Above: Stanwyck with this past Sunday's Summer Under the Stars subject, Walter Pidgeon, in Executive Suite (1954), a movie that somehow doesn't play on TCM this month (It does play on September 2 though).