My excitement’s been momentarily tempered and my word count severely cut down by the storm outside which on it’s way through delivered a no more than 5-second power outage that managed to completely shut down my computer and obliterate the first draft of this post.  I was seconds away from clicking the Save button having just finished typing out today’s TCM schedule of Mary Astor movies—that I’ll do again, but the rest of my post appears to be lost.

By the way, if you use Windows Live Writer like I do, this just might bail yourself out one day in a similar situation.  In my case the power cut seconds too soon, so the file it refers to is empty on my machine.

Anyway, in an effort to recreate my previous Mary Astor post, which I’ve now convinced myself was my best work ever, I’ll boil down several ideas into this single paragraph:

Like many, The Maltese Falcon (1941) was my “starter” Mary Astor movie and because of it I’ve come to expect trouble when Astor rears her head.  TCM isn’t airing the Falcon today, and that’s good, because instead it’s chosen 9 films, most of which I’ve never seen before, the others, like Midnight, have largely drifted from memory.  I’ll be recording everything and am excited to watch as much of it as possible in coming weeks!

I recently wrote about Dodsworth (1936) and remarked that it may have been an even better film had Mary Astor been cast as Fran Dodsworth.  This was meant as criticism of Ruth Chatterton however, as Astor is excellent as Edith Cortright, whom the cuckolded Walter Huston falls for and is inspired to his independence by.  Then again, Astor did previously play a character near Fran Dodsworth, opposite Warren William in Upperworld (1934), and she didn’t come across all that great.  I don’t think the failing was Astor’s however, more the structure of the script which really backburnered her character in favor of an especially effervescent Ginger Rogers who runs away with the picture. 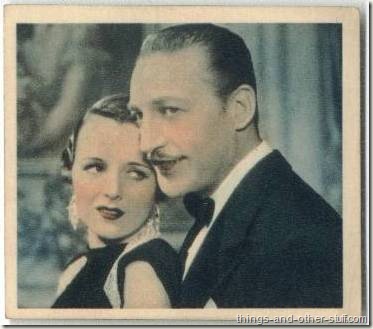 Neither Dodsworth nor Upperworld air on TCM today either.  What does?  The complete schedule follows.

The cast of The Great Lie was actually how far I’d come before that power outage cost me the original post … I was almost there!  Anyway, it’s worth mention that 1924’s Beau Brummel was Mary Astor’s breakout role; I find it interesting that she and Barrymore are both in Midnight 15 years later as well.  Mary Astor won an Academy Award for Best Actress in a Supporting Role in 1941’s The Great Lie, the last of our TCM birthday marathon.  Oh, speaking of her birthday, Mary Astor was born on May 3, 1906 in Quincy, Illinois.

My apologies for this post being so disjointed, but I didn’t want to miss the opportunity to post all of these great vintage Mary Astor images!  By the way, if you click on any of the old movie cards or collectibles shown here you’ll be taken to that particular collectible’s Photo ID Guide whenever I have one available.

Check for availability: Mary Astor in my eBay Store

For more information Mary Astor has a very detailed Wikipedia page and here’s her 1987 New York Times obituary as well.