Alfred Hitchcock’s “The 39 Steps” (1935) is already well under way when the mysterious Annabella Smith (Lucie Mannheim) asks star Robert Donat, as Richard Hannay, this question. Our answer, yes, we all have, it’s the title of this picture, now what more is there to it, Miss Smith?

Well, it’s got something to do with the two silhouettes that have tailed her from Mr. Memory’s music hall performance to the outside of Hannay’s apartment, and then there’s the Scottish town of Alt-na Shellach, which is circled on the map Miss Smith passes to Hannay as she falls dead in front of him with a knife sticking out of her back. And, oh yes, Annabella Smith has also given Hannay fair warning to watch out for a man with half of his pinky finger missing, a character we’ll certainly meet on our way to unraveling the 39 Steps.

Hannay is open to the adventure ahead of him, obvious in his spirit from the moment he met Miss Smith as they exited the chaos of the music hall and he acceded to her request of going home with him. Once in his apartment Hannay finds Miss Smith’s behavior strange—she refuses to pass in front of the open windows with the lights on, for instance—but he takes it in stride, all the more curious to hear her story. And rather than panic when he sees that there are indeed two men outside his building tailing Miss Smith just as she claimed, Hannay accepts what she’s told him and wants to know more.

Note the knife towards the right--it's planted in Miss Smith's back.

Miss Smith doesn’t survive the night and as she keels over in front of Hannay the only information she has left him with is that the 39 Steps have something to do with stopping a foreign agent from obtaining information vital to the British air defense. It may only be hours before the information leaks out of Britain, and the next and only hope of stopping the enemy agent lies in Scotland.

Hannay’s first instinct is to escape the men lurking outside, which he does through the assistance of a cooperative milk man. As his pursuers just miss the train he boards, Hannay soon sees that he’s made the newspapers as the murderer of Miss Smith and now must evade the law as well as the spies. On top of all of this running the Canadian Hannay is also involved in his own chase, to stop the spies from leaking the 39 Steps out of England. Besides any unspoken but implied patriotism to the Crown, Hannay is fully aware that proof of espionage would clear him of the murder rap.

When police board his train Hannay attempts to evade them by slipping into Madeleine Carroll’s compartment and embracing her with a kiss in order to believably keep his back to the law men. He quickly apologizes for his forwardness and gives brief explanation of his situation, but when the men circle back around to Carroll’s booth she quickly gives Hannay up to them. At this point, Carroll’s character remains nameless and we only know we’ll see her beyond this brief scene because she is Madeleine Carroll, which if not clear when viewing in 2009, certainly would have been in 1935. 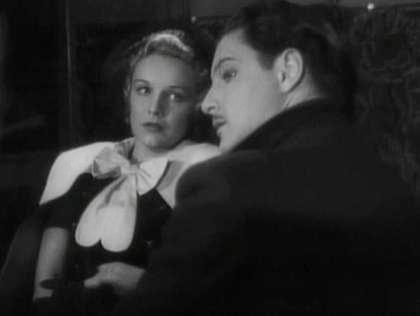 Their brief initial meeting leads to Hannay’s necessary escape from the train and departure on foot across the Scottish moors where he comes upon a crofter (John Laurie) who puts him up for the night at a price. This farmer has a younger wife (Peggy Ashcroft), who comes from the city and immediately befriends Hannay, with whom she has much more in common with than she does her husband, who is solely interested in extracting as much money from Hannay as he possibly can. Despite being bound by her strict marriage when the crofter’s wife sees Hannay accused of murder in the newspaper she believes in his innocence and even aids his escape, an action later rewarded by an off-camera smack from her enraged husband.

Hannay says grace with the crofter and his wife.

It’s after his first run-in with Miss Smith’s man with the missing pinky that Hannay finds himself ad-libbing a speech for a politician he doesn’t even know in a case of mistaken identity. Donat excels in this scene bringing humor and confidence to Hannay, who not only has no bearing on where he is or for whom he speaks, but even works to conceal a handcuff from dangling out of the sleeve of his jacket while he wins over the citizenry with a generic political bluster.

It’s in this meeting house where Hannay again meets up with Madeleine Carroll, who manages to turn him over to the authorities, or so they think, yet again, but by this time she also knows too much. Handcuffed together Hannay pulls Carroll’s Pamela through a sea of sheep to escape his and, unbeknownst to her, her captors, off to a hotel room where he forces her to pose as his wife against her will and at the threat of bodily harm. This all leads to a sexy scene involving sandwiches and stockings where Hannay’s limp hand clumsily skirts across Pamela’s bare thighs as she slips from her wet clothing.

Pamela and Hannay, sandwiches and stockings

Trapped together under these intimate circumstances Pamela begins to fall for Hannay despite the fact that she still doesn’t believe him, even turning from his view at one point to giggle over his story of his criminal background. It’s not until she overhears their pursuers confirm Hannay’s story that Pamela actually believes him, and with that wall broken down there’s no longer any doubt that she’s completely in love with him.

By the time Hitchcock reveals the 39 Steps to us we’re at the end of a nearly 90 minute adventure which has been filled by pursuits in several directions: the spies after Hannay, the law after Hannay, Hannay to Scotland and beyond to the 39 Steps. Hitchcock has given us a murder, blamed our main character and then taken a few shots at his life along the way towards clearing his name. The tone never gets too serious, in fact we get to enjoy a good deal of humor exemplified by Donat’s performance in the meeting house scene as well as his tales of his harrowing background. Despite several scenes where Hannay is chased across open land the suspense is always at its greatest in close quarters, often with those whom Hannay feels comfortable around, at least initially. 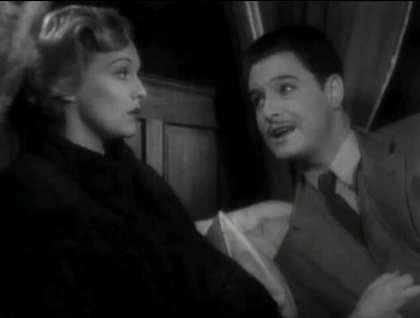 Pamela falling for Hannay as he tells stories of his criminal past.

Robert Donat, so often associated with the meek Mr. Chips, plays a Hitchcock role which surely would have gone to Cary Grant in later years. He’s good natured and charming, though forceful when pressed into action, such as his repeated threats of shooting Pamela if she did not do as he said. Madeleine Carroll excels in transforming from all business sexless skeptic to giving herself over to the situation and literally letting down her hair, and stockings, as she comes to believe in Hannay. Lucie Mannheim is fine as the mysterious Miss Smith, though she hammed up her death scene a bit more than I would have liked. Also of note is Godfrey Tearle as Professor Jordan, whose house Hannay takes refuge in after he’s chased across the moors.

Hitchcock keeps viewers on the edge of their seats throughout “The 39 Steps” with an impressively paced mystery full of danger and adventure for a very likeable lead and leading lady. Even today you’ll likely gasp at least once and probably twice during “The 39 Steps.”