Turner Classic Movies celebrates Glenda Farrell all day Thursday, August 29, 2013 with a total of 17 different movies featuring Miss Farrell. While Farrell spends several hours Thursday as the second female lead in many of the movies TCM has chosen, the Torchy Blane series provides a fun exception. Farrell plays the fast talking reporter of the title in seven of the nine series entries and each of those seven titles plays on TCM today.

I'm going to try to have a little more on Glenda Farrell either later or tomorrow, but I wanted to get Thursday's Picto-Sked out to you as soon as possible. All 17 movies are here, covered over 18 images, most of which include Glenda in the graphics. The Glenda Farrell Summer Under the Stars marathon kicks off at 6 am Eastern Time with Little Caesar, and so that's where our Picto-Sked begins. Enjoy:

As you might imagine Edward G. Robinson is plastered over the majority of Little Caesar ads. I found this one picturing him somewhat in the background with a feminine figure that I suppose is Glenda Farrell in the Moberly Monitor Index and Democrat of Missouri, April 1, 1931, page. 10. Love that "News Item" at the top of the ad!

While there will be one text only ad below, I've Got Your Number is one of a few ads on this page with graphics that don't include Glenda Farrell's image. While big movies like Little Caesar up above offer dozens of different layouts, I had to settle for this I've Got Your Number ad putting the focus on star Joan Blondell as the best example for this title. Found in the Jefferson City News and Tribune of Missouri, March 11, 1934, page 13A. Another great bit of hoopla with that "211 laughs in 69 minutes" bit at the top--make sure to count your laughs on Thursday!

It's a Titusville, PA double feature! Pat O'Brien is shown with Farrell on this Titusville Herald ad for The Personality Kid from the July 25, 1934 edition, page 5.

Apologies for quality on this Kansas City Princess ad, but maybe some of that fuzziness will disappear if I tell you that's Glenda and Joan Blondell tugging at Vince Barnett's cheeks in the top image. Found in Iowa's Mason City Globe Gazette, October 20, 1934, page 3.

Tough find. Pretty sure that's Patricia Ellis in the image with Dick Powell. Definitely not Glenda. Plucked from Morning Herald out of Maryland, June 16, 1936, page 7. 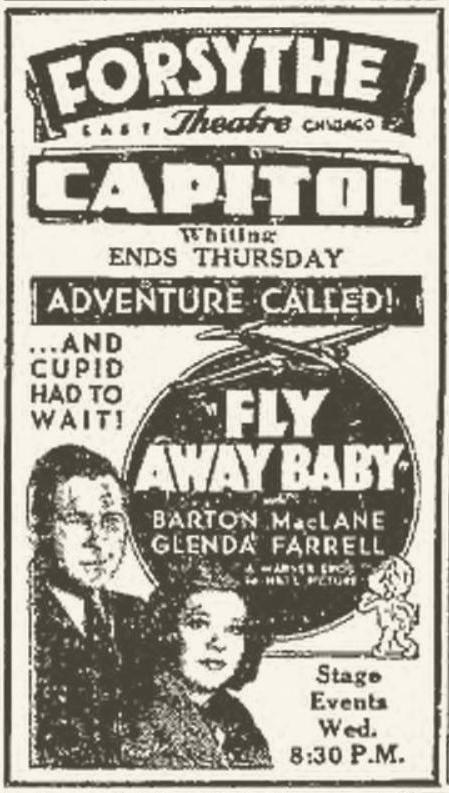 Fly Away Baby is the first of our seven Torchy Blane ads and the movie kicks off a seven film Torchy marathon on TCM at 12:45 pm. This ad was found in the Hammond Times, October 13, 1937, page 10.

"Brother, can you spare a crime," Glenda Farrell asks Barton MacLane in the second of our Torchy Blane ads, found in the Port Arthur News of December 7, 1937, page 11.

"We'll get married as soon as I solve this case," Barton MacLane says in this ad for Torchy Gets Her Man. Glenda Farrell replies, "When you solve a case I'll be too old to get married." Ha ha. From the Cumberland Evening Times, November 17, 1938, page 13.

While this ad couldn't manage a crude drawing for us they manage a crude headline for Torchy's Chinatown adventure by declaring, "No Tickie, No Torchy." Perhaps modern sensibilities are spared by the lack of artwork. Presuming that the series was floundering by this point as the advertising was tough to find. Still, Torchy Blane in Chinatown remains an enjoyable entry to the series. Ad found in the La Cross Tribune and Leader Press, March 8, 1939, page 4.

We return to the Oelwein Daily Register to find Torchy paired with the latest Gene Autry title, Colorado Sunset. Judging by the two nice ads I'm assuming Torchy Blane remained a good draw in this Iowa town! Found inside the August 26, 1939 issue, page 6.

The first Torchy Blane movie is the last of our seven Torchy ads because it's the last to play on TCM Thursday night. In case you can't make out the text at the top after the "Sock in the Jaw" headline it reads, "Meet Torchy, the world's foremost yellow-haired peril and the smartest reporter who ever made a cop fall in love with her!" Found in the Chicago Heights Star, February 12, 1937, page 10.

"Is she a woman or wax?" One thing's for sure, she's not Glenda Farrell but Fay Wray, but that's what I expected when I went hunting for a Mystery of the Wax Museum ad. Maybe there's one out there with Glenda and Frank McHugh, but all of the ones I saw did their best to emphasize Fay Wray's skin and Lionel Atwill's creepiness. Found in the Waterloo Daily Courier, March 5, 1933, page 14.

Glenda Farrell gets a better shake in the ads for I Am a Fugitive From a Chain Gang than she does in the actual movie--you'd almost think her part was as big as Paul Muni's from these ads. Yes, ads. We have two. Up above Iowa's Burlington Gazette teases, "Hers was the Kiss of Judas ... He was CRUCIFIED on the chain gang!" I'm sure the Church loved that one. It was found in their December 10, 1932 edition, page 3.

Below is an ad from the November 12, 1932 edition of the Appleton Post Crescent, page 12 with a great Muni graphic. Down by Glenda's head the small print informs, "The fury of this scorned woman sent him back to the hell-on-earth which only she knew he had escaped!" (Thanks to all of these old ads I think I just set my record for exclamation points!!!)

I'm sure Glenda's head is in there somewhere--to the left of the "Spectacle" star, perhaps? Gold Diggers of 1935 as advertised in the Moberly Monitor Index, March 23, 1935, page 8.

Did you get here yet? Sorry for the super long ad, but I loved that bit at the top talking up their sound system. This is Gold Diggers of 1937 from the Hammond Times, February 10, 1937, page 14. See it locally the same way the city folk did at Radio City Music Hall.

I didn't really expect to find Glenda Farrell in any ads for The Talk of the Town, so we'll remedy that with a crisper shot of her immediately below to close out this Picto-Sked. This particular ad came from the Cumberland Evening Times, September 1, 1942, page 9. It pictures the 17th and final movie TCM is showing for Glenda Farrell Summer Under the Stars day, The Talk of the Town. As the clock ticks to 6 am Friday the calendar shifts to Kirk Douglas.

Enjoy Glenda Farrell on TCM today and be sure to check out what other film bloggers are talking about at the Summer Under the Stars Blogathon at Sittin' On a Backyard Fence and ScribeHard on Film.