You are here: Home / Movie Star Biographies / Dolores Costello – Her Career plus Can You Help Identify This Painting?

As the years have passed Dolores Costello has become best remembered by the general public, if at all, as a member by marriage to the great Barrymore clan and even more specifically as Drew Barrymore’s grandmother by direct bloodline.   But Dolores Costello had her own show business roots which led directly to an early screen career as a child actor.  With younger and today even more forgotten sister Helene Costello, Dolores would appear in over twenty films starring her matinee idol father, Maurice Costello, between 1909 and 1915.  Their mother, Mae, was also an actress often billed on screen as Mrs. Costello. 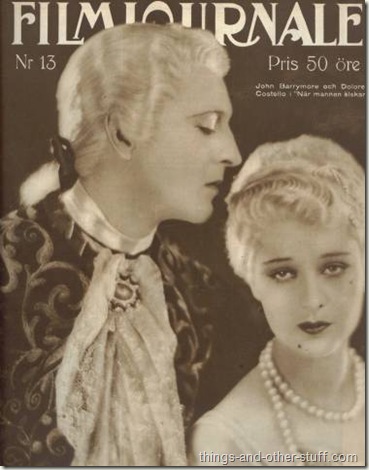 (Note: Clicking on any of the collectible images which follow will bring you directly to the corresponding things-and-other-stuff.com Photo Identification Guide.)

The IMDb notes a gap in Dolores Costello’s screen career between 1915-1923 during which time she and sister Helene became models for some of the popular illustrators of the day, most notably James Montgomery Flagg, and then in the early 1920’s the sisters would appear together on stage in the popular George White’s Scandals.

Rediscovered  for the screen by Warner Brothers, Dolores Costello had matured into one of the great beauties of the Silent Era and was chosen as a prestigious WAMPAS baby star in 1926.   She’d very soon capture the fancy of the great John Barrymore, who after rejecting Priscilla Bonner as his co-star in The Sea Beast (1926) while insisting upon Mary Astor for the part, then spotted Dolores Costello and had to have her, both for The Sea Beast and soon after as his real-life wife. 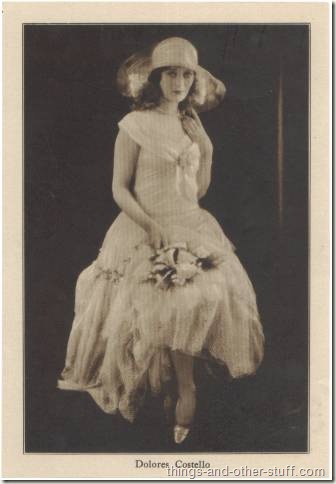 Her marriage to Barrymore lasted, on paper at least, until 1935.  Married life puts another gap on Dolores’ list of credits from 1931 through 1936 when she returned to the screen in Selznick International’s Little Lord Fauntleroy starring Freddie Bartholomew.  A leading lady in a handful of late 1930’s features, her penultimate film appearance turned out to be a classic opposite Joseph Cotten as Isabel in Orson Welles’ masterpiece The Magnificent Ambersons (1942).

This was a popular photo for distribution as you can see it was also used here in this 1920’s paper supplement issued with the French Mon Cine Magazine:

Well, Kelly purchased the image because she owns this beauty which is a bit larger than our trading cards and supplements at approximately 4 X 5 feet:

I find it fascinating to see the familiar pose colored in and was more than happy to share it based on its pure beauty alone, however Kelly had a couple of questions so I also thought this posting might be a good way to get her some answers or at least possibly leads:

In pursuit of this second mystery Kelly provides a great clue with this close-up of his or her signature on the painting—it’s just a little tough to make out, though my guess is that if you’re familiar with the signature the answer will spring right to mind:

If you think you can be of any help to Kelly with her questions about her Dolores Costello painting please do comment below.  Or if you just have something to add about Costello herself please do feel free to chime in.