What a marvelous slice of history Jean Renoir's The Southerner was for this lifelong suburbanite. Despite a dreariness, enhanced throughout all the more by Werner Janssen's Oscar nominated score, the story of Sam Tucker and his family's struggle for survival over their first year of farming cotton can't help but uplift through its constant entrepreneurial push for independence.

In only his second film, sandwiched between scoundrels in his debut effort, The Mask of Dimitrios, and the classic Mildred Pierce, Zachary Scott has yet to be confirmed as the cad we most often think of him as now, but instead shines as the wholesome Tucker, a man who truly believes that hard work alone can carve out success. At The Southerner's open Tucker picks cotton for wages alongside his wife Nona (Betty Field) and Uncle Pete (Paul E. Burns), who collapses moments after the opening credits have played, his body too old to withstand the long days of labor. It's Uncle Pete's dying words, "Work for yourself. Grow your own crops," that light a fire under Sam Tucker, who believes he can do just that.

Betty Field, who came West from Broadway and had previously appeared in supporting roles such as soft-haired Mae in 1939's classic Of Mice and Men and the sheltered daughter of Claude Rains in 1942's King's Row, is ever supportive as Sam's wife, Nona, second-billed in The Southerner. Despite a little of Field's native Boston tongue creeping every so often into Nona's southern accent, Field is wonderful as backbone to the Tucker family, her character by turns motherly, supportive, and even sensual. She's in control inside, under the Tucker's precarious roof, managing their two children, Jot (Jay Gilpin) and Daisy (Jean Vanderwilt), as well as Sam's feisty grandmother (Beulah Bondi), and gets her hands even dirtier outside working at the land alongside Sam. It's only when the Spring Sickness (pellegra) threatens the life of her son Jot that Nona suffers a brief breakdown falling into the dirt that all of the Tucker's hopes spring from crying out that she can no longer stand the boy's constant cries.

Images from The Southerner move across the screen as if they were direct from the pages of "Let Us Now Praise Famous Men": the dilapidated shack that Sam and Nona dare to make home, the crumbling well seemingly beyond repair and with no water to bear, dried out land soon scarred by Tucker's tools as he turns it over and readies it to plant, wind and storms passing though turning that same land into a ruined swamp. Sam Tucker, so poor that he's forced to fish his property's adjoining lake with his bare hands. Sam's lonely strolls across his unforgiving land with hopes of gathering goods at the expense of neighbors' kindness. And finally life sprouting from the ground as the cotton rises only as preamble to the next natural, and sometimes unnatural, disaster anxious to choke it off before harvest. Renoir hammers home the hopelessness in scene after scene, all the while pushing Sam Tucker forward, looking to farm at any cost because that's what's in his blood.

If Sam Tucker is pushed by a native entrepreneurialism, there are those around him who push back with hopes of snapping him out of it. Bondi's Granny is the loudest about it, throwing tantrums whenever life gets especially harsh, even going so far as to call Sam a coward and on more than one occasion threatening to leave because of her ill treatment. But Granny's just old-fashioned and Sam easily puts her out of his mind.

More threatening is his neighbor Devers (J. Carroll Naish), a man who's already accomplished exactly what Sam Tucker has set out to do and isn't eager to see anyone else climb the ranks alongside him. Devers knows how hard it is to reach where Sam hopes to go, however rather than be neighborly he withholds support from the Tuckers with hope that they fail. Beyond having a potential financial stake in the land the Tuckers have settled, Devers is at heart afraid of seeing somebody reach his own status from a lower starting point and even harder work than he gave to get there himself. Beyond his general surliness he takes revenge by refusing Sam's request for milk to save his ailing son and even more grievously by having his nephew Finlay (Norman Lloyd) set their livestock loose to trample Sam's coming crops. 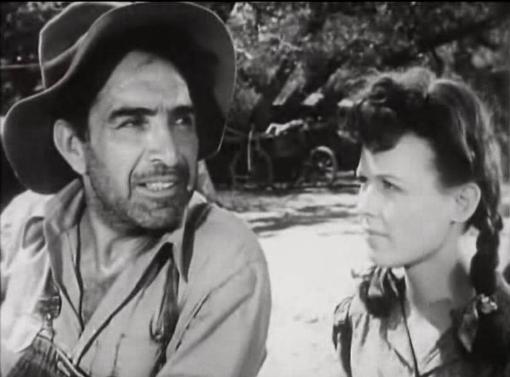 J. Carroll Naish as Devers and Noreen Nash as his daughter Becky

But worse than Devers, a man Sam fights off even when he's armed with a knife, is Sam's best friend Tim (Charles Kemper) who offers him something even more convincing than Granny's mockery or Devers' sabotage and that's temptation. Tim believes that security comes through employment, working for another in return for guaranteed wages. The message he delivers and largely confirms throughout The Southerner is the same warning that Sam's friendly boss, Ruston (Paul Harvey), gives him before advancing Sam his piece of land at the opening: if the little guy gets ruined, that's it, he's through, but if you're working for the big guy you're always going to get paid.

Tim proves this when he quietly rescues young Jot by bringing a cow to the Tucker farm to supply the milk required to make the boy well again. However prior to reaching into his own pocket Tim dangles escape in front of Sam's eyes by telling him he has no doubt that he could secure Sam a job alongside him in the city at $7 per week. Sam is impressed by the wages and appears to waver momentarily, but even with his boy's health hanging in the balance he's not ready to chuck his dream. Tim tries to understand Sam but in the end believes that Sam and those like him are only gambling and that the stakes are too high.

Unfortunately Sam does come off as selfish through this refusal to bargain as we're not even shown his discussing it with Nona, whose mother's instinct undoubtedly would have caved in to this instant relief. Beyond the world views of Granny, Devers, and Tim, Jot's failing health is a tangible reason for Sam to abandon his dreams, but he puts hopes of a better future ahead of his son's health, pushing the idea of entrepreneur as gambler to hazardous extremes. Perhaps it was secure in the knowledge that Tim's offer still stood does Sam trudge forward attempting to borrow milk from Devers who remarkably pours it into a trough of pig chow stating that the pigs come even before himself. Maybe Sam always believed Tim would bail him out, though if he did the character gave no inclination to the audience that he thought so.

Sam continues to insist that the way of life he strives for allows him to feel more free, while Tim buys him a beer and explains that the only freedom available comes through having the most greenbacks you can. As close as brothers neither man is capable of understanding the others beliefs, though in their final scene together it is Tim who finally grasps the greater point and sums it up by saying "It takes all kinds." 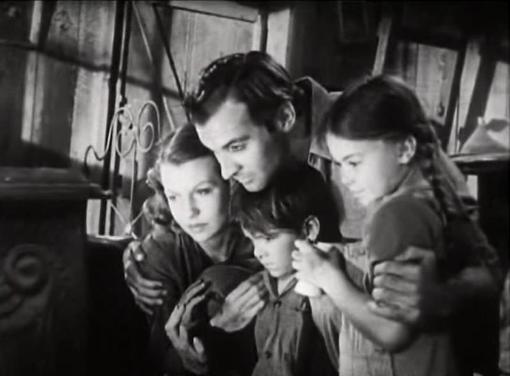 The Tucker family gathered around their home's first fire

The Southerer was based on George Session Perry's novel "Hold Autumn In Your Hand" which was adapted for the screen by Hugo Butler and Jean Renoir. Nunnally Johnson and William Faulkner also contributed to the script. Besides Janssen's nominated score, Jack Whitney was nominated by the Academy for Best Sound and also Renoir for Best Director. Zachary Scott easily could have been considered for Best Actor for his very natural performance as Sam Tucker, but the 31 year old budding star was passed over in a year which saw Ray Milland win for his performance in The Lost Weekend.

The Southerner is a story about a cotton farmer with dreams of operating his own farm. We're shown a family who comes to their land with nothing--so little that they cut up Granny's blanket in order to make a coat for their young daughter--and we see how they cope with deep poverty including periods of hunger over the course of an entire year. Grimly realistic on the surface it's the story underneath, the story of a man's drive and determination, which elevates The Southerner from documentary to well-rounded and thought provoking motion picture.

The Internet Archive offers The Southerner as a free download. I've included their embed below for your convenience: