"Selling title, ay?" Lewis Stone asks his secretary. He’s talking about the latest book he wants his company to publish, The Office Wife, but he could just as well be referring to the Warner Brothers film of the same title in which he asks the question.

Based on a story by Faith Baldwin, directed by Lloyd Bacon and featuring Joan Blondell in her first feature release, which led directly to a long term contract with Warner Brothers, The Office Wife is a fun hour, even if it never quite feels like the hit that it was in the late Summer of 1930.

The movie took in over $18,000 in just two days when it premiered at the Winter Garden Theater, eclipsing a record set earlier that year by The Dawn Patrol. Months later, in early 1931, Warner Brothers would remind theater operators about its success in trade paper ads for not one, but two, films spun out of The Office Wife’s success: Big Business Girl with Loretta Young and Dorothy Mackaill follow-up Party Husband. Each was said to “put the reverse English on Office Wife.”

These were bright days in the career of Office Wife star Mackaill, whose best recalled success would come late the following year in the tropic set drama Safe in Hell. She was a top star at Warner Brothers and First National at this time and was cast in the lead of all types of films. While I like her best in dramatic scorchers like Safe in Hell, I’ve seen her play for laughs better than she manages in The Office Wife. She’s at her best in this one casting longing gazes at her boss after she’s fallen hard for him.

Maybe it’s all of those Hardy Family movies, but Lewis Stone seems a bit of stretch as that object of Mackaill’s affection. I think I’ve seen Stone dispense too much justice in Carvel, happily married to matronly Fay Holden, to do anything but laugh when he drops his robe to stand poolside in his swimming gear. (Though I must admit Judge Hardy is in better shape than I’d ever imagined!) Still, this was not a problem in 1930 when The Office Wife was released and Lewis Stone was still nearer his days as a romantic leading man than he was his future spent spouting morals to Mickey Rooney.

Stone is better than Mackaill in The Office Wife. She’s a bit too overeager in her earliest scenes, by design, but too much so. She improves deeper into the movie but I got the feeling that she wasn’t too interested in this one. Mackaill plays working girl Anne Murdock, quickly promoted to the private office of Stone’s publisher, Lawrence Fellowes, after Fellowes discovers that his previous secretary was secretly in love with him.

Brains yes, but it helps to hike the skirt up over the knees too.

Anne is dating an reporter about her own age, Ted (Walter Merrill), who really likes sleeping with the windows open and can’t stand woolen underwear. You have never seen anyone so full of himself contain his boasting to such mundane topics. I got the feeling that Anne just keeps him around because he amuses her.

Ted wants to marry Anne, an idea her sister, Katherine (Blondell), thinks is just terrible. "Ted wants a parking space for a couple of babies and a free laundry,” she tells her sister. “If you want to learn what the word lonesome is, take him on.”

"Maybe you think I couldn't hold him," Anne says.

"Not from the looks of the heel marks in that Ford of his," Katherine replies.

Here's the bathtub shot of Joan Blondell that you expected if you've seen this one before.

Blondell is good for a zinger every time she crops up. She dishes another good one over the phone to Ted, late in the movie, when he wonders why Fellowes is keeping Anne so late at work: "I’d hate to tell you, but I bet he's good at it." The fact that Mackaill seems a bit off in The Office Wife makes Blondell stand out all the more.

Time passes quickly—and how could it not in a movie just shy of an hour—and Anne becomes more attached to her boss. She’d be more than happy to send Ted on his way and fall into Fellowes’ arms, if not for one complicating factor: Mrs. Fellowes, played by Natalie Moorhead. She is excellent.

This post is getting smutty! The Judge undresses Natalie Moorhead.

Mrs. Fellowes had obviously married her husband for his money and is almost immediately shown playing around with another man (Brooks Benedict), yet the movie doesn’t turn us against her. The Fellowes marriage comes to an end under the most civilized of circumstances with Mrs. Fellowes even informing her husband that his secretary is in love with him. When Lawrence Fellowes mentions that a young reporter blocks his path to Anne, his wife honestly feels for him. An interesting relationship and a nice change from what was expected.

Finally, a shot of a wholesome American girl ... even if she really is from Yorkshire! Dorothy Mackaill in The Office Wife

The Office Wife was one of several films I sought out featuring Dorothy Mackaill after she knocked me over in Safe in Hell. It is not the movie I’d recommend to new Mackaill fans as an immediate follow-up--I’d point to Bright Lights (1930) or The Reckless Hour (1931) first. On the other hand, if you’re looking for more Joan Blondell, and despite the smaller part she is unquestionably the greater attraction today, then The Office Wife is for you.

A product of its time with much of the story revolving around office roles that would now be deemed sexist, its greatest attribute is its sterling dialogue, courtesy of screenwriter Charles Kenyon. Lots of saucy lines throughout and they are not all courtesy of Blondell’s character. Also features Blanche Friderici as a writer so masculine that her cigars are too strong for Stone! She is played for laughs in her brief role, but mostly at the expense of the working girls she is to write about in The Office Wife. 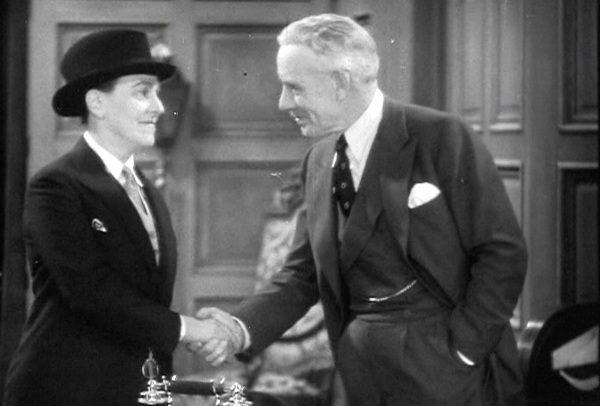 Stone shakes hands with Blanche Friderici who plays the writer hired on to write The Office Wife, even if she'd prefer to be writing stuff like Jim Tully!

The Office Wife is available on DVD-R from Warner Archive. It is paired with another Dorothy Mackaill feature, Party Husband (1931). Thanks very much if you purchase this double feature through my Amazon affiliate link

. And, of course, Dorothy Mackaill in Safe in Hell

, which I also wrote about HERE.

My friend Karen at Shadows and Satin selected The Office Wife as her pre-Code pick of the month. You can read her coverage HERE.

Maybe it's the hair. Dorothy Mackaill and Lewis Stone