You are here: Home / News - Notes / Star Wars Magazines – Over 1500 References All in One Place

I can't even remember which magazine I sold to Bob, but I do know it was from the late 1970's and had a story about Star Wars somewhere inside!

Bob's site "The Star Wars magazines encyclopedia" is a well designed guide to magazines containing articles about the original Star Wars trilogy. The magazines may feature Star Wars on the cover, but sometimes there's just an article hidden inside, which in my mind takes this display far beyond the ordinary and turns it into a challenging collection.

Bob was kind enough to answer my request to share his collection with us, including granting permission for me to use some of the images from his site--don't worry, all of the covers I chose do include Star Wars on the front cover.

Q: I love how you say you display your collection in a site--I do the same with my movie collectibles on another of my sites, but part of the reason I do this is because I'm primarily a dealer. Often I don't have the physical item on hand for very long. I'm assuming you're more of a collector than dealer and if so how do you store your Star Wars magazine collection for safe keeping?

Bob: As long as one cannot display his collection as a normal exhibition, a website is an excellent solution to share it with an interested community spread around the world.

I plan to develop each section of the site to include more information about the content of each magazine. Obviously this is a long term task, but it has to be done in order to make the site even better.

You are right, I am not a seller.  If I ever do sell my collection, I would like to sell it as a single lot so that my years of collecting could be preserved. Another option would be to donate it to a public archives library with the condition that it never be broken up.

Each magazine is preserved in a plastic sleeve and the bagged magazines are stored in cardboard boxes to keep the sunlight out. Quite regularly, I open the boxes and leaf through them, either to read an article or to find a quotation when somebody asks.  The collection is kept inside a smoke-free home. 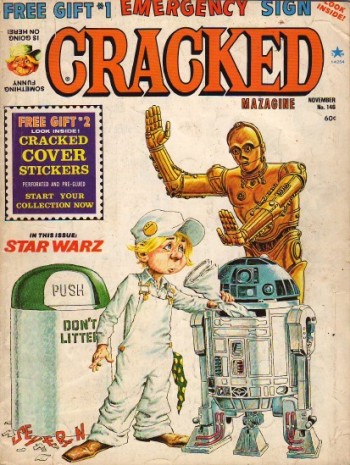 Cracked Magazine, November 1977, , courtesy The Star Wars magazines encyclopedia (Hey, I had this one!)

Q: Why Star Wars--I know the big why it's a big enough movie to have been a cultural event, but was there anything special which appealed directly to you about the original trilogy?

Bob: A very long answer would be necessary!

I'd say I chose to collect Star Wars items because of many common reasons shared with those of my generation who were enthralled by the unique vision of the first Star Wars movie at the time of its release.

More specifically, as a musician myself the superb score by John Williams appealed strongly to me, and the whole aesthetic of the original trilogy remains, up to this very day, the best ever invented for a space opera.

At a very early stage, my interest in the Star Wars trilogy focused on the technical aspects, the artistic quality and the mythological dimension of the movies.

I was never interested in the toys or the fictional spin-offs such as the novels, games, etc.

Q: Just for fun, who's your favorite character?

Bob: Harrison Ford, of course, was the hero of my youth--but that's not very original!

Q: Have you had any contact with visitors to your site, and if so, has anything interesting come of that contact?

Bob: A lot of people have contacted me to obtain information about my magazines and their content and I am glad it can be useful towards that purpose.

I consider my collection as a source of documentation devoted to the initial reception of the original Star Wars trilogy which just happened to come at a time when there was both a rich variety of magazines being published as well as a sense of liberty in editorial style and opinions.

I have a goal to write a history of the Star Wars reviews between 1977 and 1983; I'd spoken about this to Steve Sansweet, and while he encouraged me, he could not offer any direct help due to his legal commitment to Lucasfilm, Ltd. Still, I do hope to complete this project one day or another. (Note: Swansweet, of Lucasfilm Ltd., does leave the first testimonial about Bob's site on his home page.)

Bob: If I had to mention one thing, I'd stress the great variety and richness of iconography Star Wars inspired in those years. Nowadays when a Star Wars film is released the same poster art is used all over the world. But back in the 1970's and 1980's local artists were allowed to create their own visual conception for the posters in their country. The magazines further reflect this variety--they are the testimony of this creativity. So if I were to ever put together a book about the original Star Wars reviews it would definitely include a large section of illustrations, most of them quite rare and never before seen.

Thanks for taking so much time in helping me put this together Bob! Hopefully readers were able to contain themselves from clicking over to your site until now, and assuming you have please do be sure to take an extensive look at The Star Wars magazines encyclopedia site.