I was watching these on eBay ready to pounce, but eBay seller wherens2008

knew what he was doing when he listed these 1940's Laff Magazine issues properly with Marilyn Monroe's name in his eBay title--not all sellers catch this.

Note: Final prices are in and wherens2008 did well.  Both auctions ended the evening of August 20, 2009, here's what real eBay bidders paid:

This pair certainly show off a lot better than my "Grail" issue of Family Circle from a couple of months back, they look to be in solid shape for vintage magazines. These are still very early cover appearances for Marilyn Monroe, as evidenced by her billing as Norma Jean (one I believe correctly as Dougherty, the other with an "a" as Daugherty).

wherens2008's auctions each end tomorrow (Thursday, August 20) evening. If they go for anything near where they are right now, well, the buyer has got themselves a bargain.

You can reach either individual auction by clicking on the photos below (and thank you again wherens2008 for the permission to share), or just click on their eBay ID above to see everything being offered including several other 1940's editions of Laff, plus Look, See and other period titles. 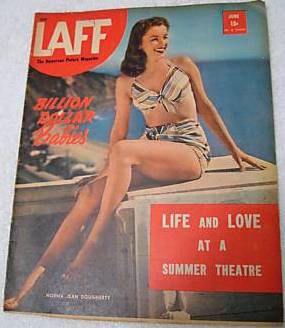 Laff Magazine, June 1946 featuring brunette Norma Jean Daughterty on the front cover. This is only Marilyn Monroe's 2nd appearance on the cover of a major U.S. magazine (5th appearance overall) and is quite rare.

Coming not too far behind is this January 1947 issue of Laff Magazine, also featuring Marilyn as Norma Jean Dougherty