Good morning! Nodded off early last night and awoke to The Squall (1929) on TCM. Like Robert Osborne said in his intro, I don't think they intended for this one to be so funny.

So glad they tucked it in the middle of the night for Loretta Young's sake. The poor 16-year-old got off her dialogue so badly I'm almost surprised she got another chance at talkies! Pretty ugly stuff from her elders as well, especially Richard Tucker, though Alice Joyce was semi-passable. At least vampy Myrna Loy looked like she was having a good time, though after having watched her do the same in her next film, The Great Divide (1929), I'm left wondering who fell for that terrible accent she uses in each of them.

TCM's first Loretta Young Star of the Month marathon continues until 11:15 this morning when they stop to pay brief tribute to Marion Davies, who was born on this date in 1897. The four Marion Davies titles for those who are interested:

After finding myself wide awake near the end of The Squall (I laughed so hard when Alice Joyce caught Richard Tucker hoisting a chair to smack their son with that there was no going back to bed for me!) I brewed the coffee and opened up the newspaper files with an eye towards Miss Davies' birthday.

I think you know I like the early stuff, so my search eventually wound up zeroing in on Davies' 1917 film debut Runaway Romany. Since this one has zero IMDb votes and barely a word written about it in 95 years I'm going to assume it is lost. 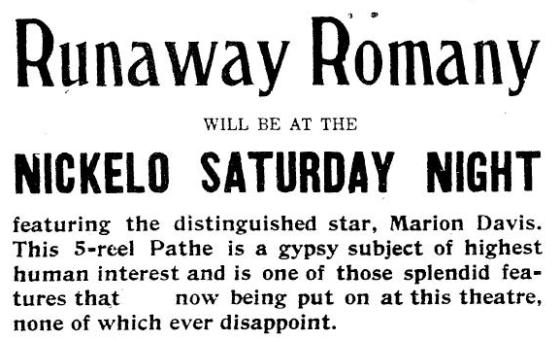 Marion Davies was not an unknown quantity when she came to the movies, having already been in the Ziegfeld Follies and just then riding high on Broadway in the musical Oh, Boy. Her older sister Reine was also known in show business and it was Reine's ex-husband, George W. Lederer, a well-known musical comedy director on Broadway himself, who directed and produced Marion's movie debut.

Runaway Romany appears to have been produced just prior to Davies' beginning her long term relationship with the publisher William Randolph Hearst. I bumped into varying accounts this evening, but I'm always happy to settle on film historian Jeanine Basinger who writes

"Marion Davies made her film debut in 1917 in Runaway Romany, which was shot in Florida and released by Pathe. She played a Gypsy girl who turns out to be the long-lost daughter of an important man. The film was not particularly successful, and Davies was in it only because it was directed by her brother-in-law, George Lederer. According to Davies herself, years later, Hearst saw the film and signed her for his film company for $500 per week" (316).

The production was not without its difficulties. A June 1917 article, which also claims Davies wrote the script, notes how Marion did not balk when the title had been changed from The White Gypsy to Runaway Romany. She did draw the line however "when she discovered that the scenario had been changed to introduce real gypsies and a trained bear, and that she was expected to climb a tree with the bear pursuing her" ("The Passing").

It's claimed that Marion went on strike to protest and given the film's lack of availability I don't know whether the bear got to chase her around on screen or not.

While Basinger wrote that Runaway Romany was filmed in Florida, it appears that at least part of it was shot in Yonkers, NY. This August 5, 1917 clipping from The Dramatic Mirror was just too good not to reproduce in full:

Runaway Romany released at the very end of 1917 by which time Marion Davies was sold on motion pictures:

"Marion Davies, now completing her first film play, 'Runaway Romany,' is reported to be wavering in her determination to return to the speaking stage after her brief excursion into the picture field. She is most enthusastic over the co-operation of her association in the production, all of whom, she says, have made her feel at home in her new surroundings" (Dean).

In Hollywood On the Hudson

Richard Koszarski refers to Runaway Romany as "a screen test clearly designed to impress Hearst" (115). One which worked. Cecilia of the Pink Roses (1918), her next film, was produced by the Hearst created "Marion Davies Film Corporation."

While Hearst certainly aided Davies at this point in her career it should be stated that his backing is now seen as actually having held back the overall career of the very talented Marion Davies. TCM airs four quality talkie comedies today which show Davies off to great advantage.

Set your DVR to go if I caught you in time.