I was sidetracked on the way to my latest Andy Hardy post by Gallant Sons, an MGM murder mystery boasting enough familiar faces to steer us back where we need to go for next time. 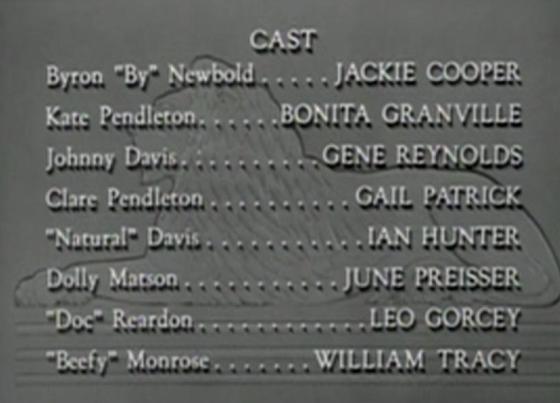 Jackie Cooper is top billed in this one though shares equal time with Hardy alum Gene Reynolds and Bonita Granville, who we’ll meet up with again a couple of times early in 2013 as Andy’s college girlfriend.

Minor Watson, who pulled a tease on Andy’s Aunt Milly in The Hardys Ride High (1939), plays Cooper’s father while Reynolds’ dad is played by Ian Hunter, to be discussed in this space once I reach Andy Hardy’s Private Secretary (1941).

June Preisser actually led me to this title as she’s featured in the next Hardy movie we’re going to cover, Judge Hardy and Son (1939), though her part in Gallant Sons isn’t as big as that of some of the other young stars.

That turned out to be no big deal as Preisser only piqued my curiosity towards this title. It wasn't until I saw that Gallant Sons was directed by Hardy regular George B. Seitz that I searched for my copy and put Judge Hardy and Son away for the night.

Gallant Sons provides a slightly darker world for Seitz and company as proven by its murder-mystery classification alone. But any of the teenagers of Gallant Sons—barring perhaps Leo Gorcey--are as squeaky clean as Andy, Beezy and the rest of Seitz’ better known gang. Even Gorcey actually manages to fit in with this bunch, though I’m sure his pals would vote him most likely to face a misdemeanor.

Johnny Davis (Gene Reynolds) and Byron "By" Newbold (Jackie Cooper) are best pals even though By’s dad (Minor Watson) runs the town paper and is always putting Johnny’s pop, Natural Davis (Ian Hunter), on the spot. Despite their opposing positions Barton Newbold thinks Natural is the squarest guy in town and Natural thinks the world of Newbold, Sr. as well.

While I’m tempted to say Ian Hunter is cast way against type as a professional gambler, he’s amongst the gosh-darned swellest criminals you’ll ever run into in movie-land so his character actually fits his usual mold to a T. Unfortunately, Natural’s profession does darken his reputation some in the world of Gallant Sons and so when publisher Newbold and accompanying police discover Natural with smoking gun and dead woman they have no choice but to make the arrest.

The dead woman had been blackmailing Natural and his girlfriend, Clare Pendleton (Gail Patrick) and it was in rushing to Clare's defense that Natural had bumped into that incriminating body. But Natural keeps quiet about the blackmail at his trial realizing that any mention of it will only serve to give the jury a motive to latch onto him. They found plenty anyway and Natural is quickly convicted of murder and sentenced to life in prison.

Natural’s wishes are for Johnny to live with Clare and her daughter Kate Pendleton (Bonita Granville). He also tells Johnny that he should stay friends with By Newbold. Easier said than done. Kate actually revs up Johnny at school the next day when a misguided taunt causes him to pick a fight with the much bigger By. By does his best to avoid fighting Johnny but winds up knocking him down and eventually out.

For some reason El Brendel is on the scene to dispense advice as Olaf the too-friendly janitor. That goes for the fight as well as much of what follows.

At home that night Johnny strikes a bargain with Clare to remain under her care as per his father’s wishes before Kate, who feels terrible over causing the fistfight, prods Johnny to come along to a meeting that By has called.

The meeting is direct result of the fight from earlier that day. By proposes that the kids investigate Natural’s case, but that no matter what they find he and Johnny shake hands at the end. Johnny agrees.

GALLANT SONS ad published in the December 12, 1940 edition of the Vindicator and Republican, page 4.

From there a fun adventure begins with Johnny, By and company digging into the murder mystery. While results come almost immediately they are somewhat impeded by Kate after the kids unintentionally stumble into shocking revelations about Johnny’s own background that she wishes to protect him from discovering.

The path to the murderer doesn’t prove quite as difficult as would be expected but the real payoff in Gallant Sons comes with the Hamlet-inspired solution used to attempt coaxing a confession out of the suspected murderer. The kids receive an assist from Kate’s mom, Clare Pendleton, on this final task which culminates with a gun being pulled backstage of the school play!

Gallant Sons boasts a talented and intriguing cast of young actors headed by Jackie Cooper, Bonita Granville and Gene Reynolds. Leo Gorcey is the wisecracking member of the group, Doc, while William Tracy plays intellectual Beefy, who also looks plenty threatening with a baseball bat in his hands! Rounding out the main group is former Tom Sawyer Tommy Kelly, who doesn’t say much, and June Preisser, whose Dolly is only around because of her interest in Cooper’s By, though she helps out in the investigation some too.

18-year-old Jackie Cooper, returning to MGM with this title, seems to be missing in action until the entertaining final scenes in which he brings By's school play to life. Until then Gallant Sons is mostly opportunity for Gene Reynolds and Bonita Granville and they are both very good. Leo Gorcey stands out just by virtue of being himself and William Tracy has a few humorous moments. The other kids are mostly invisible as is El Brendel who just doesn’t seem to fit. 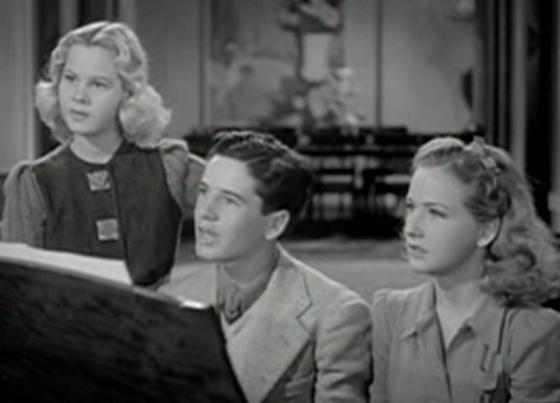 A fun Hardy sidetrack that is easy to lose yourself in once Hunter is out of the way and the kids are set loose on the case.

One other Hardy family connection in Gallant Sons. Andy’s pop makes a brief appearance! No, not Lewis Stone, but Mickey Rooney’s real-life father, Joe Yule, Sr., who whistles an incriminating tune and then gets a few lines in reply when confronted about it by the kids.

Gallant Sons is available as a Made to Order DVD from Warner Archive which can be purchased through my Amazon affiliate link HERE (thank you!)

or directly through Warner Archive’s own site HERE. Gallant Sons also airs occasionally on Turner Classic Movies, which is where my copy and most of the resulting images on this page come from.