All of the regular Hardy cast members are on hand for The Hardys Ride High in which the family fly to Detroit to stay in a mansion while awaiting their fate in regard to a potential two million dollar inheritance. 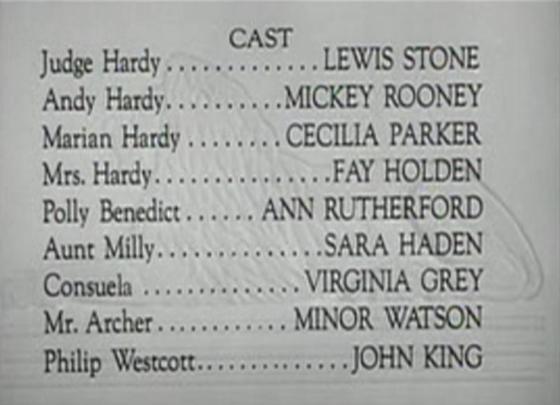 This is a fun entry in the series which sees most of the focus on Judge Hardy (Lewis Stone), Andy (Mickey Rooney), and, of all people, Aunt Milly (Sara Haden).

The key guest stars in The Hardys Ride High are John King, before Monogram Westerns turned him into Dusty King, as Philip Westcott, the adopted son of the deceased millionaire, and Virginia Grey as his showgirl girlfriend, Consuela MacNish. Together Philip and Consuela conspire to push the Hardys out and claim the entire estate in Philip’s name.

Also present, still a little over a year away from appearing in Pride and Prejudice, is Marsha Hunt in Judge Hardy’s chambers at the beginning of the film. Hunt plays Susan Bowen, whose husband, Caleb (Donald Briggs), is allowing himself to be sued over a dress she bought not because he can’t afford it, but in order to make a public spectacle of his wife’s extravagant spending.

Judge Hardy hammers out a sensible solution in which they’ll split Caleb’s earnings fifty-fifty after all bills have been paid. Makes sense, except the Judge points out that Susan spent well more than half of Caleb's earnings the previous year.

“Susan, you’ll find that what a generous husband gives is a lot more than you’re entitled to in a square deal,” the old-timer tells her after reuniting the young couple. And since it's 1939 she didn't even flinch.

This petty financial squabble is the first of three Carvel set incidents which will serve to set up the dilemmas of The Hardys Ride High.

But first, the root of all Hardy troubles arrives in the Judge's chambers when Mr. Jonas Bronell (George Irving), an attorney from Detroit, comes to inform Judge Hardy of his potential windfall. If the Judge can prove that he is in fact the great great grandson of Colonel James Standish Leeds, a well-known figure of the War of 1812, then the Hardys inherit two million dollars.

We next check in with Andy as he sprints to Polly Benedict’s (Ann Rutherford) house in his dirty uniform eager to tell her about Carvel’s big football comeback.

He finds Polly sitting with Dick Bannersly (William Orr), a sophisticate she met when visiting Boston. Bannersly smokes specially made cigarettes and mentions how Polly’s lemonade would improve with a little shot of gin.

Andy gets his kiss from Polly before heading home, but he’s very upset that he’s been upstaged by a “fancy pants” from Boston.

The Judge, Andy and Marian (Cecilia Parker) all arrive home within a few moments of one another with Emily (Fay Holden) and Aunt Milly (Sara Haden) awaiting their arrival—where else would they be?

Judge Hardy is so uncharacteristically excited over his own big news that Emily suspects he’s feverish and sends Milly off to buy quinine. The Judge calms down and tells the family of his ancestor, “that gallant soldier of the War of 1812,” and they begin to believe him.

Trying to comprehend the idea of two million dollars Emily asks her husband, “Will we be able to pay off the mortgage on this house?” He tells her of the Detroit mansion and not to worry, but then the children give him something to worry about.

Marian adds that, “I hope we’ll all know how to act in our new position in life.” Her words are aimed at brother Andy, her nose upwards.

Uh oh. Money causes change and it looks like the Judge might have a couple of potential monsters on his hands!

Down at the drug store proprietor Mr. Davis (John T. Murray) treats Milly like the spinster that she is. After insulting her about her age Davis suggests, “Be calm, Auntie. Be calm, be gentle. Be charming. If a woman hasn’t got charm, what else has she got?”

Milly storms away but we wish she had smacked him before she left.

Milly catches the Judge alone when she returns home and asks permission to come along to Detroit with the family, noting that she has $4,000 saved up and can pay her own way. Of course, the Judge had planned on Milly coming all along. She’s family.

But Milly needs a change:

“James, I’m an old maid. I’m Aunt Milly Forrest, the schoolteacher. Why it’d turn this town upside-down if I even got a permanent wave.”

“No woman wants to be a good right arm, except to her own husband. I don’t want to teach school. I want to cut loose. I want to see things and do things before I get too old.”

And so this is the state of the Hardy family as they depart for Detroit. The Judge’s job, as usual, is to make sure everybody keeps their heads and remain the solid upright folks that they always have been.

The greatest problem comes much later when the Judge himself is confronted with the truth about his ancestor. Locked alone in his study Judge James K. Hardy kneels before his fireplace with the only known piece of evidence that could threaten the Hardy family’s new lifestyle.

“I wonder how honest any of us is if the stakes are high enough,” says Judge Hardy.

By the end of The Hardys Ride High it’s wife Emily who puts it best when she tells her husband, “We wouldn’t ever be the Hardy family with two million dollars. Why we’d just be separate people living in the same house.”

Throughout the movie we’ve seen growing evidence that this would be true from the innocence of breakfasts in bed to Marian’s telling of a lie to Andy’s outlandish story about the Hardy family curse and his general plans for life as a millionaire.

Some of Andy’s gems to the Judge along the way in The Hardys Ride High:

“Let’s make a deal, 50-50. You worry about getting the money and I’ll worry about spending it.”

“I’m glad you’re a judge and up on the laws of breach of promise, because the way I feel I’m a cinch to get sued.”

“Maybe 2 million dollars don’t make any difference to you, you’re old. Why you’ve been used to being poor all your life, you couldn’t change if you wanted to. But me, I’m just starting out in life …”

But Mickey Rooney’s best scenes begin when he meets Philip at the Paradise Club on a quest for showgirls. Later that evening Philip escorts him to Consuela’s apartment and Andy Hardy is overwhelmed by the potential for sex. He makes a clumsy exit telling the most popular chorus girl in town, “You got to excuse me, lady, all of a sudden I got a terrible pain in my stomach.”

Rooney has plenty of room to shine in The Hardys Ride High, especially with Cecilia Parker giving over her shrinking share of time to Sara Haden's Aunt Milly.

Aunt Milly's expanded role is the most interesting part of The Hardys Ride High, at least for anyone regularly tuning into the Hardy escapades.

Sara Haden breaks out Aunt Milly's glamorous side: "You don't think it's a little too daring?" she asks the family.

Even though matters in Detroit do not turn out the way that Milly would have wished, she puts on enough of a show back in Carvel that Hardy fans are left with a new view of the character which we can carry throughout the series, even as Milly once again recedes far into the background.

But in The Hardys Ride High Haden's Aunt Milly showed us that she is indeed flesh and blood.

Aunt Milly on a date! Sort of. Minor Watson and Sara Haden.

The Hardys Ride High is the sixth film in the Hardy Family series and was directed by George B. Seitz as have all entries to this point. Its working title was The Hardys at Home. The original screenplay was authored by Agnes Christine Johnston, Kay Van Riper and William Ludwig and, as always, the basis of the Hardy family characters are Aurania Rouverol's 1928 play Skidding.

. Screen captures on this page were taken from a recording of a previous Turner Classic Movies broadcast.

Advertisement for THE HARDYS RIDE HIGH from the Kingsport Times, May 21, 1939, page 14.