Cast regulars Lewis Stone, Fay Holden and Ann Rutherford join the team in this second Hardy Family entry. Despite the new faces You're Only Young Once is partially a direct sequel to A Family Affair.

After the Judge sentences a shocked teenage girl to 30 days of going to bed at 6 o’clock for drunkenness ("What?!" she asks--the bizarre verdict delightfully setting the homespun tone for the series with Stone as the Judge as he will be from this point forward), he finds newspaperman Frank Redmond (no longer Charley Grapewin but now Frank Craven) waiting in his chambers.

Redmond is on the verge of losing everything after having bet heavily on success of the aqueduct which had figured at the center of A Family Affair. Hoyt Wells (Selmer Jackson returning) holds the note on Redmond's land and is going to foreclose. The Judge lets bygones be bygones for the sake of saving Redmond's newspaper and willingly endorses the note to help buy him some time. But Redmond hasn't been completely honest about his own position to the Judge.

Back home Marion is mooning over a photo of Wayne Trent (Eric Linden from A Family Affair), who never actually appears in this film but is mentioned a number of times. And Andy definitely isn’t afraid of girls anymore—he’s sitting on a swing trying to steal a kiss from Ann Rutherford's Polly Benedict.

But we soon leave Carvel behind as the Judge wins out on his wishes to vacation at Santa Catalina Island where he hopes to land a 200 pound swordfish.

Once we’re away much of the focus jumps to the kids. Marian forgets about Wayne and begins a romance with lifeguard Bill Rand (Ted Pearson)—a married man! Andy attaches himself to Jerry Lane (Eleanor Lynn), a 16 year old enacting her own faulty idea of the sophisticate based upon her mother, currently away in Reno waiting out her latest divorce.

Marian, who actually gets a bit tipsy at one point in this one, falls hard for Bill. And while Andy doesn’t start smoking or drinking or pick up any of Jerry’s other bad habits, he’s also swept away by this girl with far more experience than Polly back home.

The Judge is a bit hard on Andy in this one (”This girl isn’t good”) but manages to get his point across in the long run. He’s far more careful in his handling of Marian, though he'll eventually put Bill on trial before the entire family in a uncomfortably heavy-handed resolution to Marian's infatuation at a family beach picnic.

Lewis Stone as the Judge with screen daughter Cecilia Parker as Marian Hardy.

With family matters settled the Judge is about to head out for one final attempt at that swordfish. A telegram from Redmond reaches him at the dock, but despite the bad news the Judge presses forward with his plans and is rewarded. It’s back to Carvel to face an uncertain future, though not without the Judge gleaning inspiration from that newly mounted 280-pounder in his study.

Lewis Stone makes for a much less bombastic Judge Hardy than had Lionel Barrymore and if you're only familiar with him from any of the series' better known later entries you'll find that Stone is already the same old Judge Hardy you've always encountered. 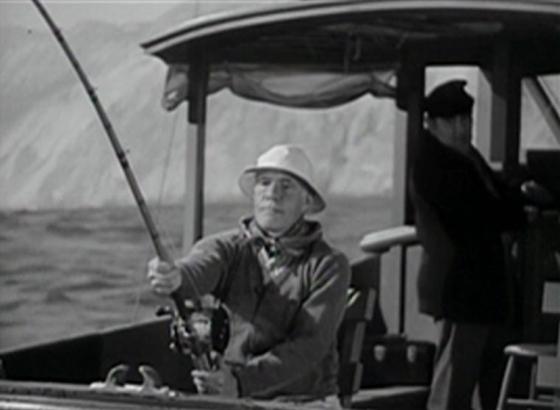 The Judge (Lewis Stone) makes his first go for that swordfish. Charles Judels as the Captain in the background

This is the Judge Hardy we know and love. An old-fashioned yet unflappable and good-humored man whose wheels we watch spin as he's confronted by modern times. Life's lessons are tactfully handed down to the younger generation through understanding conversation before the Judge stands back to let his youngsters try their best. He heads his family in much the same manner he presides over his court, only stepping in to grease things along when he sees that the kids have reached the point where they need his aid.

Interesting to see Cecilia Parker billed right after Stone, still a notch above Mickey Rooney. While Rooney is afforded plenty of time in You’re Only Young Once Parker’s Marian character is provided a much larger spotlight than she often will be later on in the series.

Fay Holden takes over for Spring Byington as the Judge’s wife, Mrs. Emily Hardy. While her part is small in You’re Only Young Once, Holden, like Stone, provides a performance that is more or less interchangeable with any of those to come.

Sara Haden will play Aunt Milly a dozen times during the series.

Ann Rutherford debuts as Polly Benedict and shares scenes with Rooney at the beginning and the end of You’re Only Young Once.

With all of the series' most familiar faces now in place the main difference between You're Only Young Once and the rest of the series to follow is which of their characters become the focus.

While the preceding movie truly was A Family Affair this second entry is mostly a Judge Hardy movie with remaining time divided almost equally on each Marian and Andy's affairs. Over time Marian will typically gain as little attention as the other Hardy women and Andy Hardy will eventually overshadow even his father, though the Judge will often play a big part in Andy's adventures though their man-to-man conversations.

Oldest daughter Joan Hardy Martin from A Family Affair gains no mention in You're Only Young Once, or to the best of my recollection any of the Hardy family entries to follow. Emily Hardy does make mention of another child, but only in recollecting the terrible night when that "child was born and left us." Joan was written out, though I like to think she was such a black sheep that even the wholesome Hardy family decided she was best forgotten.

You're Only Young Once is the second film in the Hardy Family series. It is also the second directed by George B. Seitz, who would direct 13 of the Hardy Family features--all but the final main entry, Love Laughs at Andy Hardy (1946), the 1958 reunion film, Andy Hardy Comes Home, and, tucked in the middle of an impressive run, 1939's Andy Hardy Gets Spring Fever. As always the characters are based on Aurania Rouverol's play Skidding.

You're Only Young Once can be found in The Andy Hardy Collection: Volume 1, available through my Amazon affiliate link HERE (thank you!)

or directly through the Warner Archive site HERE.