You are here: Home / Movie Collectibles / 1930s Film Stars and Their Pets – A Group of Real Photo Postcards

Keeping it light heading into the holiday. "Film Stars and Their Pets."

Just my way of saying that I haven't finished the article that I've been working on yet and while I won't interrupt your Thanksgiving holiday, I did want to stop over for one more visit before you settled in for that turkey dinner!

I do hope to jam a couple thousand words or so about an Alice White movie into your email come Friday morning though!

But as for today, what follows isn't just a random collection of pretty people with their well manicured pets--this was an actual set or grouping of postcards issued by Valentine's out of Great Britain in the 1930s.

I only wish I had more of them to show you. I've got seven, which follow:

These are real photo postcards issued out of Great Britain in the early 1930s. I've included views of each side so you can also see the biographical information included on back. 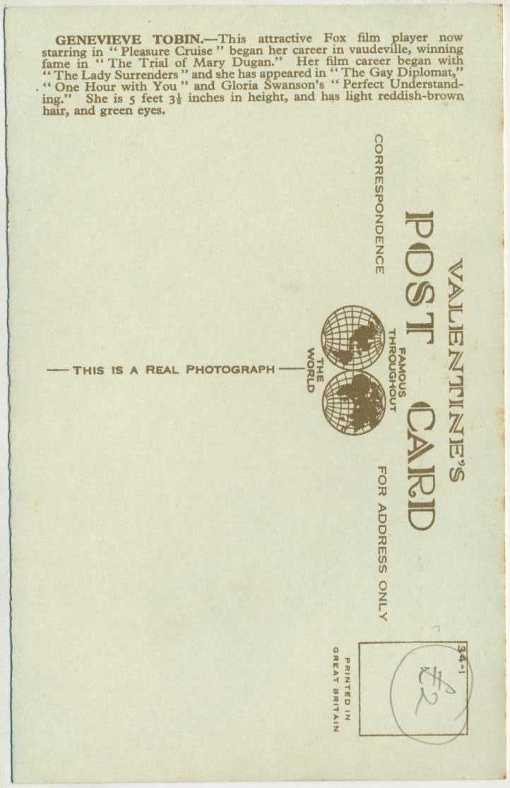 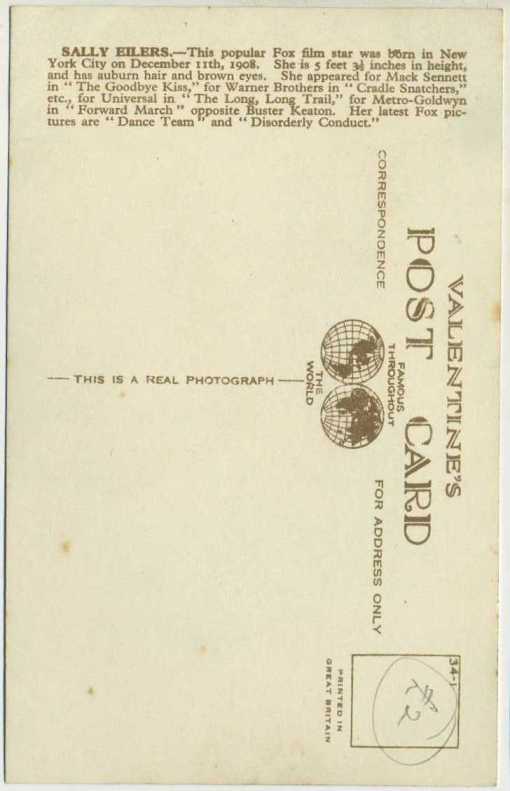 Besides the seven different "Film Stars and Their Pets" cards shown here I've also seen Heather Angel, Janet Gaynor, Joan Blondell and Carole Lombard listed as being in this set of Valentine's postcards. If (when?) I come across them or any others I'll add them to this page.

In case you're looking for a February 14th type theme, don't--Valentine's is the brand name of these postcards, not the occasion they were manufactured for. Though I don't see anything wrong with passing one along to your sweetheart.

Upon further reflection perhaps Valentine's should have just called these "Film Actresses with Their Dogs." Seems more to the point.

Did that splash of color catch you by surprise? You can find color toned versions of all of these, not just Ann Dvorak.

By the way, these 7 "Film Stars and Their Pets" postcards are among the 65-plus 1930s era Real Photo Postcards that I added to the Immortal Ephemera Store on Tuesday afternoon -- You can shop that aisle HERE.

If you'd like to see more film stars pictured on postcards with their pets here's a Flickr album I found linked from the Ross Verlag site that may be of interest.

Wishing you and yours a very Happy Thanksgiving!

I'll talk to you soon and--

--Whoops, couldn't contain myself. That's for anyone feeling misled by my title and looking for something other than actresses with pet pooches.

(Notice how the caption refers to "a pet chimpanzee" and not his or Cooper's "pet chimpanzee. Just a random pet chimp that Coop sat down for a smoke with.)

This card picturing Gary Cooper with someone's pet chimpanzee is not part of the "Film Stars and Their Pets" group of postcards. Though maybe it should be. It's a card from a Boy's Cinema series that I'll soon be covering on the site.

--Anyway, a Happy Thanksgiving and I hope to be back on Friday with some Alice White.
Cliff