Perhaps my favorite of all of the old movie cards and collectibles I've handled are the circa 1936-1938 R95 8x10 linen textured movie star premium photos.

I'm talking about them yet again because the latest batch just arrived and included a few I had never before seen.

Before we get too far along I should show you at least one. They look like this:

Don't worry. More images follow in a bit ... and you can always check out nearly 240 of them at once in the gallery HERE.

Hopefully you save that gallery for later though--I'll link to it again further down the page. Regaining my train of thought:

Why are these my favorites?

The set is huge in scope. I've seen well over 200 different pieces so far which means the collection isn't limited to just a handful of Hollywood's biggest stars. The checklist as it stands to this point is basically the entire Hollywood roll call for the period. (No Warren William though, what's up with that?)

High quality. Okay, they're not actually linen, they just pretend to be. But they are printed on a thicker than normal quality paper which is rippled, or perhaps ridged may be the better term, giving them a linen like feel and quality.

I keep finding new pieces. I've been assembling this checklist since 2004 and the batch that came in earlier today (Monday) includes 12 examples I've never seen before (Plus an additional 9 title variations I've yet to have seen).

I've seen some of the poses over and over, but it's a special thrill to find, say Warner Oland, after spending eight years with no idea that such a piece existed!

Coming with my latest batch of R95s were five issues of the "EMO Movie Star Photo Magazine."

I've never had a copy of this publication before.

But the "EMO Movie Star Photo Magazine" is more folder than magazine.

Each of the individually numbered 18 issues, sold for a quarter apiece back in '38, contained 12 different R95 linen premiums inside.

The magazine portion of the "EMO Movie Star Photo Magazine" are the two pages inside this simple folded sheet. They include brief biographies of each of the 12 stars pictured on the premium photos included within.

Along with the biographies is a message from the EMO Editor and Publisher. It reads as follows:

"EMO MOVIE STAR PHOTO MAGAZINE" is a unique innovation in the realm of fan periodicals. It was conceived for regular patrons of motion picture theatres, who prefer loose pages of film star photos for framing or permanent collections instead of tearing reproductions of photos from other publications, because, the subject on the reverse side is mutilated or wasted.

THESE MOVIE FANS are also keen students and appreciative of the beauty, art, culture, education and entertainment values incorporated in the motion picture. They want brief biographies and statistical information of screen players for their private "Hollywood Diaries" in which is entered personal opinion of screen players to whom individual pages have been allotted. These movie fans get more entertainment value out of EVERY motion picture they see--and record their emotions in the diary. Their reactions to screen portrayals of today become the very pleasant memories of tomorrow.

Assembling your own personal permanent collection of our linen-like finished photo pages in an exclusive album, especially manufactured by us for the purpose and an accompanying Hollywood diary will make this hobby only half interesting. You must know these screen players well, all about them, their histrionic mannerisms, etc. Go to a movie theatre several times EVERY WEEK.

We would appreciate your opinion of this new magazine idea--suggestions or criticism. Only a desire to fulfill the wishes of the majority of movie theatregoers inspired this unique publication. Won't you please drop us a line, merely writing, "I try to attend motion picture theatres several times, each week." Sign you name and address. IT WILL NOT BE USED FOR PUBLICATION OR ADVERTISING PURPOSES.

Wow, I paid a quarter for these things, you'd think they could spare me the far from subliminal messages about getting myself to the theater. Once per week isn't enough for you guys?

The back cover includes more of the same pitch:

Here is how the EMO Movie Club distributed these linen like premiums, 12 at a time, during this period:

Keep in mind my EMO Movie Club "issues" are all dated 1938--they had been issuing these 8x10 premiums through other outlets for 2-3 years prior to this as well. More details to be found on the comprehensive gallery page, once again HERE.

For instance, I just spotted my third different Patsy Kelly premium in this batch. All 3 Patsy Kelly premiums show the same pose but the film titles vary with Nobody's Baby (1937), There Goes My Heart (1938) and Road Show (1941) each named.

Okay, enough with the details. Time for some pics!

Here come each of the R95 photos that I saw for the first time when opening today's mail--12 in all!

They are also now included in the main gallery (as are the 9 title variations), but since it's taken me eight years to bump into these poses I thought it'd be nice to give them their own moment in the spotlight as well:

Danielle Darrieux in The Rage of Paris

Priscilla Lane in Cowboy from Brooklyn 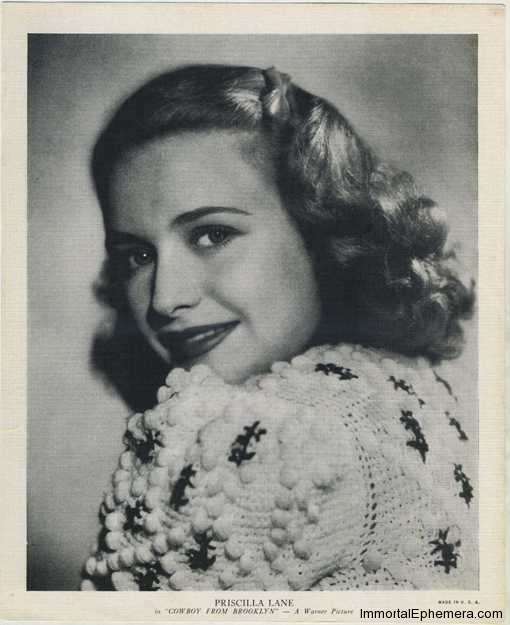 Andrea Leeds in Letter of Introduction

Ray Milland in Men with Wings

Dennis O'Keefe in Hold That Kiss

Cesar Romero in My Lucky Star

With nice pieces retailing $10-$20 apiece, and some considerably less if you're very patient and shop around, this is a set most anybody can afford to build.

But it's going to take you awhile!