You are here: Home / Movie Star Biographies / John Boles, Sinatra of the 30s and Elvis Presley of the Stone Age

In a 1961 article reporter Bob Thomas credited a Houston reporter for having semi-recently hung the “Elvis Presley of the Stone Age” tag on actor John Boles. Boles didn't mind. 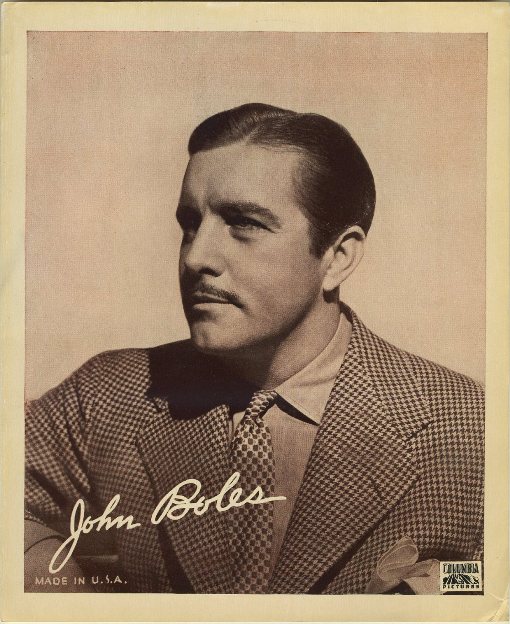 Boles, whose best known credits include a trio of Shirley Temple films, as well as Back Street (1932) with Irene Dunne, Craig’s Wife (1936) with Rosalind Russell, Stella Dallas (1937) with Barbara Stanwyck and, of course, the horror classic Frankenstein (1931), is not typically a old time Hollywood name on the tips of our tongues today.

Upon his death in 1969 columnist Bob Polunsky remembered John Boles as an elite talent:

The career activity of John Boles gave a new dimension to the theatrical world, for he was distinctive as a reliable performer; and he carved a special niche in the legends of show business that has yet to be matched by anyone. 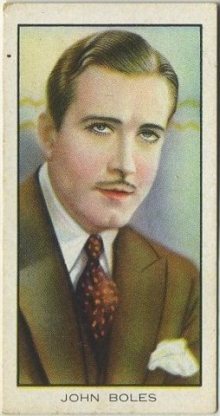 Enjoying his greatest run of movie stardom from the late 1920s into and throughout the 1930s, Boles would draw comparisons to another legend when recalled by Erskine Johnson in the late ‘40s as the “Sinatra of the ‘30s.”

If you only know John Boles as Colin Clive’s friend Victor from Frankenstein then the comparisons to legends such as Frank Sinatra or Elvis Presley won’t make any sense. Boles doesn’t sing in Frankenstein. He largely spends the movie trying to win Mae Clarke’s affections, but blends in so well with the scenery that Mae continues to prefer Clive’s insane doctor of the title.

Neither does Boles sing in Back Street nor Stella Dallas, though Temple fans will recall his voice from Stand Up and Cheer! (1934) and Curly Top (1935). But it was John Boles’ voice that made him a star and secured him his legend, one which our old time columnists would be surprised to learn has not survived very well to this date.

John Love Boles was born in Greenville, Texas, October 28, 1895. He’d return to that same state in the 1950s, become an oil man, and die there in 1969. In between he became a star who carved out his fame in early movie musicals such as The Desert Song and Rio Rita (both 1929).

John Boles was a pre-med student at the University of Texas when World War I interrupted his studies and swept him off to Europe. While overseas an orchestra leader asked for a volunteer soloist and Boles stepped into the role. Still, when he returned home he first tried being a cotton broker but then landed a voice audition with Oscar Seagle which gave him courage to head to New York where he hoped to sing light opera.

When this didn’t work out right away Boles earned a living by teaching singing and French at an upstate New York high school. It was that job which provided him with the opportunity to return to Europe on a student tour which eventually brought him to the Paris studio of renowned tenor Jean de Reszke, who took Boles under his wing.

“I’ll always think of that as one of the highlights of my life .. The chance to come under the training of de Reszke, a great teacher and greater philosopher,” Boles told Emilie Bowers in 1935.

Boles made his Broadway debut as a replacement for Jay Velie in 1923’s Little Jessie James. He also appeared with Margaret Irving in Mercenary Mary in 1925 before being spotted by Gloria Swanson in Kitty’s Kisses the following year. She selected him to be her leading man in The Love of Sunya (1927).

Sunya wasn’t Boles’ first film but according to the actor, “it made certain film nabobs aware of my existence and led to me being cast in The Desert Song the next year” (Bowers). By the time of that interview Boles had also appeared with Swanson in 1934’s Music in the Air, a musical. Still referring to Sunya he added, “I’ve a lot for which to thank gorgeous Gloria.”

Warner Brothers’ The Desert Song (1929) was notable as the first all-talking screen operetta. It ushered in the era of Boles’ peak of movie stardom, followed later that year by Rio Rita and his performance of “It Happened in Monterey” in King of Jazz.

After 1943’s Thousands Cheer Boles left Hollywood and found himself in a Broadway hit, One Touch of Venus, alongside Mary Martin. It ran for well over 500 performances into the beginning of 1945.

But it was the tunes from Boles’ early films which proved popular when he had become “one of the highest paid stars of the country’s supper room circuit” in the late ‘40s (Johnson). 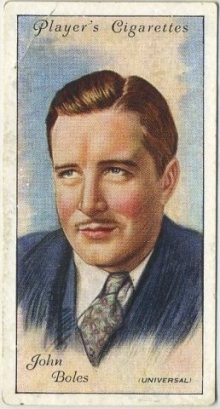 “I’m sort of a wandering troubadour,” said Boles in 1947. “New York in the fall, Florida in the winter, and a California in the summer to give my real estate an annual checkup. It’s a wonderful life and I’m happy.”

Boles married Marielite Dobbs, his college sweetheart, in 1917, and they remained together over 50 years until his death. The couple had two daughters who were grown and married by the time of these later “wanderings.” Marielite “goes with me. I sing a couple of songs at night and then sit beside a beautiful swimming pool all day. What’s wrong with that?”

“I never make plans. But I love to travel and I’m working to pay for a trip,” Boles told Edith Rosenblatt upon his return to America from Great Britain for a 1951 Pittsburgh performance. “I’m Scotch-Irish. The Irish likes to have a good time and the Scotch says, ‘Get it paid for.’”

Boles returned to Hollywood after what was nearly a ten year absence to appear in his final film, 1952’s Babes in Baghdad, before settling down to his oil business in San Angelo, Texas. 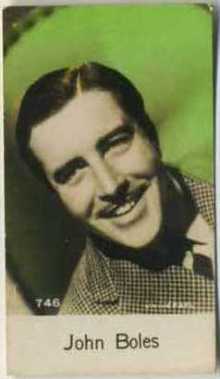 He returned to Hollywood in 1961 to help promote the latest version of Back Street starring John Gavin, Susan Hayward and Vera Miles. At that time he told Bob Thomas:

“Yes, I saved my money … At least they won’t have to be giving any benefits for me. When my career started to slow down, I didn’t want to sit around. So when the opportunity came to get into the oil business, I jumped at it.

“I enjoyed my acting career, every minute of it. I enjoy the oil business too; it’s also busy and exciting. I like Texans. They think big.”

John Boles was still fondly remembered by fans and press alike when a heart attack claimed his life, February 27, 1969. Despite having only appeared in a single film during the previous 25 years it was movie actor, not oil man, given as the 73-year-old Boles’ usual occupation on his death certificate.

John Boles has the unfortunate distinction of being largely forgotten for the roles which initially made him a star and playing second fiddle to a host of strong leading ladies in what are thought of as classic women’s films. His best recalled musicals are beloved because they star the greatest child star in film history and not only doesn’t he sing in the film he’s been seen in most throughout the years, but he rates a distant afterthought to a classic film monster and the mad scientist who created him.

Yet in his own time, excepting Frankenstein, John Boles was never an afterthought. Known for his handsome features, robust physique, and baritone voice, Boles remained a popular and highly paid performer throughout his career.

Returning to Bob Polunsky for the final word on Boles:

"His career in show business was a full one and the envy of many stars of his era. Although he did make more musicals than anything else, John Boles was never really type-cast. If anything, he could have been typed as an all-round showman in the true sense of the word." 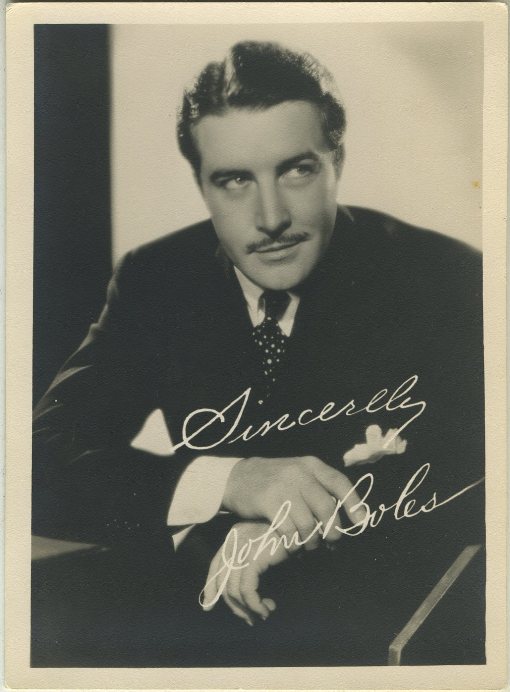