Everything Immortal for October 13 ...

Louise Closser Hale in 1872. Closser Hale's career began on stage in 1894 and she became a major star just after the turn of the century. Wrote 10 books

and over 150 short stories. Barring a single 1919 credit Closser Hale didn't arrive on screen full-time until 1929 and appeared in several well known films: Platinum Blonde, Shanghai Express, The Man Who Played God, Letty Lynton, Movie Crazy (all 1932), Today We Live, The Barbarian, Dinner at Eight (all 1933) and many others before her death in 1933 at age 60.

"This is said to be a great day for youth, but it's a great day for the maturer star. Look at George Arliss, Marie Dressler, May Robson, Lionel Barrymore. Twenty years ago people didn't love character actors." -- Louise Closser Hale, 1932.

Louise Closser Hale with Billie Burke in Dinner at Eight (1933)

Douglass Dumbrille in 1889. Active on Broadway throughout the 1920s Dumbrille is better remembered as an in-demand character actor from the early '30s through to TV in the mid-60s. I don't know about you, but I typically need a moment to distinguish Dumbrille from Lionel Atwill, finding them similar in appearance and typically playing the same devious roles!

Dumbrille raised some eyebrows later in life, when at age 70 he married the 28-year-old daughter of fellow character actor Alan Mowbray--which gives us a good chance to revisit my review of the Mowbray biography written by his son ... who was also Dumbrille's brother-in-law, Alan Mowbray, Jr.

Dumbrille was previously married for 47 years and took the death of his first wife very hard: "I let myself fall into a stupid, sentimental rut ... I just didn't care any more. Pat changed all that. She gave me a reason for living." And from the same Bob Thomas penned article the more often cited, far more defiant, quote from Dumbrille:

Age doesn't mean a blasted thing ... The important thing is whether two people can be happy together. Pat and I agreed that I had some happy years left and we could best share them together. Happiness means everything in life."

Irene Rich, born Irene Luther in 1891, was a silent star of the 1920s who made the transition to talkies--she played Jackie Cooper's mother in The Champ (1931) and reunited with Will Rogers, whom she played with in several silent films, as his wife in Down to Earth (1932)--before becoming even more successful when moving to radio, where she was a hit as the long time star of "Dear John."

She returned to film in the 1940s, where you might recall her as mother to Margaret Sullavan in The Mortal Storm (1940) or Gail Russell in Angel and the Badman (1947), or as Ward Bond's wife in John Ford's Fort Apache (1948). She retired upon marrying her fourth husband at the end of February 1950: "I tried to mix my career and marriage once before and it didn't work." Miss Rich died in 1988, age 96.

"I suppose what it all boils down to is that I'm a born rebel ... I don't know what it means to compromise and I don't believe in teaching youngsters to do it. Diplomacy, too, is something I regard as highly over-rated. Whenever a fight looms i think the thing to do is run into it. Fighting's fun. You can dodge, of course, or retreat, but you weaken yourself." --Irene Rich, 1935, after the move to radio.

Gertrude Howard in 1892, African American actress who played her share of maids and servants in the late '20s-early '30s. Most notably alongside Mae West in I'm No Angel, though she also appeared in The Wet Parade (1932), which is covered on the site HERE, and as a maid in Peck's Bad Boy (1934), her final film appearance, covered HERE. Howard was a couple of weeks shy of her 41st birthday when she died after a brief illness in 1934. Reporting the actress' death the Associated Press noted that Mae West sent flowers.

Oscar nominated actor Cornel Wilde in 1912. I first think of him as the unfortunate husband of Gene Tierney (are those words possible?) in Leave Her to Heaven (1945). Also starred in 1955's The Big Combo; opposite Ida Lupino in Road House (1948); high flying on the trapeze with Betty Hutton in Oscar winning Best Picture The Greatest Show on Earth (1952); Oscar nominated himself for Best Actor as Chopin in A Song to Remember (1952), and later the acclaimed director, producer and star of The Naked Prey (1966). 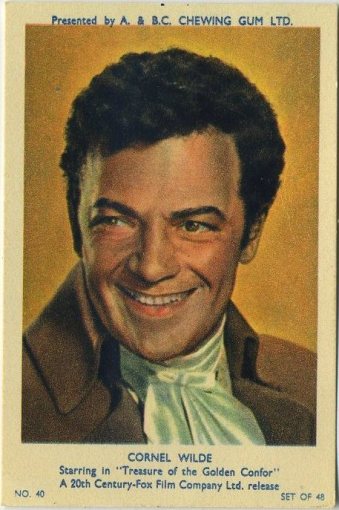 The lovely Harriette Haddon in 1915, who looked beautiful in dancer and chorus girl bits from 1932 through 1945.

Tragic star Robert Walker in 1918. Hitchcock's wonderful psychopath from Strangers on a Train (1951) died that same year after a reaction to a sedative administered by his doctor. A major talent, Walker also starred as Jerome Kern in Till the Clouds Roll By (1946); opposite real life wife Jennifer Jones in Since You Went Away (1944); Flying with Van Johnson in Thirty Seconds Over Toyko (1944), the fresh from history story of World War II's Doolittle Raid; In love with Judy Garland in The Clock (1945). The 32 year old Walker had appeared to overcome personal problems and was considered in the midst of a major comeback when the end came.

Laraine Day in 1920, the Dr. Kildare regular who became a regular at the ballpark as Mrs. Leo Durocher throughout the late '40s and 1950s. Also seen opposite Joel McCrea in Hitchcock's Foreign Correspondent (1940) and giving it to husband John Howard throughout the flight of The High and the Mighty (1954) starring John Wayne.

In honor of the season:

"I don't feel like an average fan. Winning and losing affects our lives. It's our future.

"When we lose a game I'm much more upset than Leo. He doesn't bring the game home with him.

Laraine Day and Leo Durocher were married from 1947 until their 1960 divorce.

Italian born/French raised singer/actor Yves Montand, star of The Wages of Fear (1953) and later, opposite Marilyn Monroe, in Let's Make Love (1960). Married to actress Simone Signoret for over 33 years until her death in 1985. Remarried and passed away himself in 1991 at age 70.

Happy birthday to film historian Rudy Behlmer, who turns 86 today. Editor of a couple of the more indispensable books I own, Memo from David O. Selznick

, and a friendly face--and voice--on so many DVD extras!

Here's a more detailed look at Behlmer's work from someone who knows him, Ted Naron at A Blog of My Own.

Nationally syndicated ad lifted in this case from the Sheboygan Press, March 5, 1931, page 11.

I'm going to cut it short at just the birthdays today. There sure were enough of them!

Various sources for the quotes found above follow below.

Have a wonderful weekend,
Cliff