Another ad I ran across was a distributor's ad for 5¢ and 10¢ Movie Stars and Cash Punchboards. The following ad showed up in the August 5, 1950 issue of Billboard Magazine: 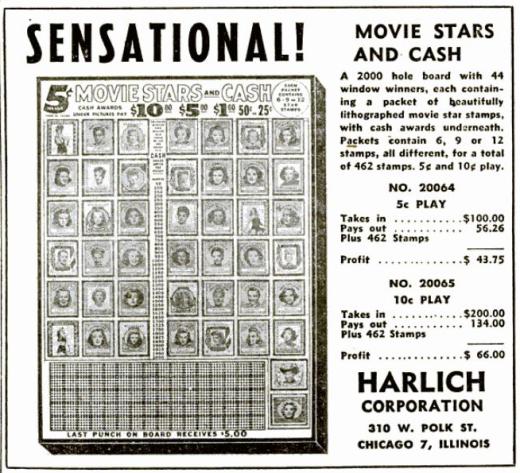 We haven't ever discussed Punchboards on the site before. Movie Stars aren't really the selling point here; gambling is.

A patron pays their nickel to the house and receives a metal punch (like a key) to push through any remaining sealed hole on the punchboard. When the patron slides the punch out it contains a slip of paper noting the prize or noting a code to the prize (this is gambling, after all, and wasn't always legal).

Our movie star board (and I see Betty Grable up at the top left there) issued by the Harlich Corporation notes that it's a 2,000 hole board with 44 "window winners, each containing a packet of beautifully lithographed movie star stamps, with cash awards underneath." 462 total stamps are contained in the board in packets of 6, 9 and 12 stamps each.

I haven't handled a punchboard in many years, long enough ago that when I did I was still dealing sports cards and it was a sports themed board. I got a refresher on the hobby over at Punchboard.com.