That's one we classic movie fans have heard a lot this year, isn't it?

It was inescapable with the sad trio of Golden Age film star passings earlier this year begun by Ann Rutherford (June 11) who was soon followed by Andy Griffith (July 3) and Ernest Borgnine (July 8). Or did Andy begin it and the cycle close out with Ernie and Celeste Holm (July 15)? What about Tony Martin (July 27)?

We do it for film stars and we do it for ballplayers. Politicians too. I'm sure when I'm an older man I'll fear the grim reaper's path as names make the paper from out of my High School Yearbook.

While I could not discover the definite origins of the "Death Comes in Threes" superstition I did find over and over again that, no matter how old the reference, it is regarded as an old superstition and that it's observed on both sides of the Atlantic. (I wonder how many trios of non-English language superstars have passed this year and escaped my notice?)

The death in threes cycle seems to have sped up. If you gab on social networks such as Twitter or Facebook you'll likely hear the phenomena broached as early as the first death in a "cycle." "Oh no, I wonder who could be next?"

Personally, I think we are just better attuned to the idea of death in threes today because both information and celebrity come cheap. We're aware of more people and the news cycle roars on both without interruption and somehow unavoidable to anyone who tunes into to any electronic device.

While I don't think any of us takes the idea of death in threes all too seriously, beyond it being a way to link ourselves with each other to pop culture by common frames of reference, I do still vividly recall those newspaper headlines announcing deaths of famed personalities on the same day.

Most recently pop icon Michael Jackson and Farrah Fawcett, who each died June 25, 2009. When I was a kid I saved the October 11, 1985 newspaper with Orson Welles and Yul Brynner on the cover a day after they had each passed away. I was a little older, but did the same with the May 17, 1990 newspapers depicting the late Sammy Davis, Jr. and Jim Henson.

Each of these pairs of passings, so tightly linked, seemed to bring an overall greater sense of actual grief that those individual deaths, sad still, that we link in our minds mostly for the sake of conversation. The comparison almost seems to be that of a death of nostalgia to nostalgia itself.

Last night I began research on the early 1930's character actor David Landau for the coming "What a Character Blogathon" being co-hosted by the superstar trio of Once upon a screen ..., Paula's Cinema Club and Outspoken and Freckled (There's still time to sign up!). A Blogathon hosted in threes. My Landau research was what sparked this little article.

Landau died September 20, 1935 and little did I realize that by that New Year's Eve roundup he too would be grouped in a trio. Screen funny man Sam Hardy died that October 16 and screenwriter Carl Erickson predeceased both men when he took his own life on August 29.

Spaced 47 days apart I'm left to conclude we have narrowed the acceptable time frame for death coming in threes.

And not to cheapen Mr. Erickson's legacy, but I also wonder if including a screenwriter with two supporting actors makes for a fair trio. Surely former stage star DeWolf Hopper (September 23), famed for his recitation of "Casey at the Bat," or film pioneer W.K.L. Dickson (September 28), would have filled out the Landau-Hardy trio more neatly than Erickson had.

I suppose it all comes down to perception. Perception of a certain time and place that is.

27-year-old Erickson only ever had opportunity to work on a total of 10 films. Neither Landau nor Hardy appeared in any of them. But his output emerged upon the screen between 1932-1935 coinciding with former stage actor Landau's own screen work, 1931-34, and a good deal of Sam Hardy's time in talkies.

Of course Erickson's period of work activity would also correlate with anyone else who was working on or in film when he died. Hopper and Dickson were not and so from a 1935 perspective would not have made as acceptable a trio.

As you can see at the top of this page in the headline of the December 31, 1935 edition of The Binghamton Press, from which the Associated Press notice was sourced, the "dread number" was called to mind six times total throughout the calendar year 1935.

For the sake of time and place here are the other five groups of linked trios.

A new cycle began with the death of director Millard Webb on April 21, who was followed by Junior Durkin May 4 in an auto accident which also claimed the life of Jack Coogan, Sr. Jackie, Jr. was on the scene and survived the same accident. Writer Philip Klein is pointed to as the third death in this cycle, June 8.

The next grouping includes two suicides, that of film executive Ray Long and, on July 15, young actress Julia Graham, who had only appeared as an extra in two films to that date. On August 6 former silent star Monroe Salisbury fractured his skull in a fall and died at age 59.

The Will Rogers tragedy happened August 15, 1935 and Will was soon followed by actress Marjorie White on August 21 after a road accident left her dead at just 31. Mack Sennett regular Mack Swain, who appeared in Chaplin's The Gold Rush, died just a few days later on August 25.

The Erickson-Landau-Hardy trio of deaths occured next before 1935's final group of three deaths began with Gordon Westcott's 1930 polo accident. That was followed by the suicide of Aleta Friele, Mrs. Ross Alexander, on December 7 and concluded with the most famous tragedy of Thelma Todd on December 16.

While you may mentally link Andy Griffith and Ernest Borgnine with either Ann Rutherford or Celeste Holm today, how many of these deaths in threes from 1935 immediately sprung to mind?

It's all time and place, a social game that we will continue to play. 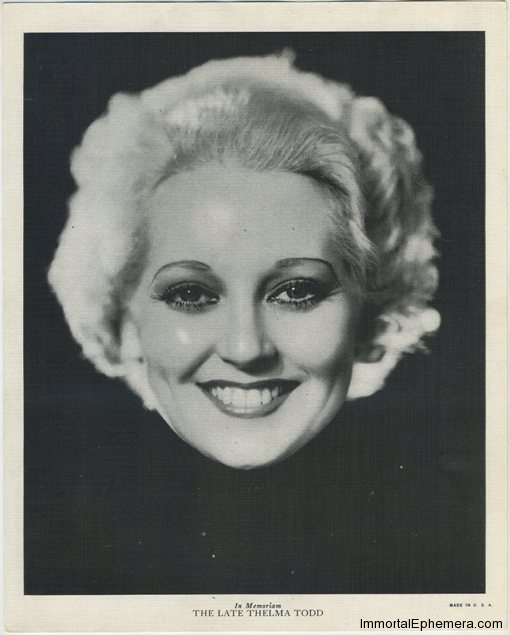