You are here: Home / News - Notes / Johnny Weissmuller After the Olympics and Before Tarzan

Today a look back at Johnny Weissmuller as he made the news in between his swimming career and his debut as Tarzan.

Babe Ruth and Jack Dempsey pop to mind as the greatest sports legends of the 1920's, but in a decade where we really began to worship our sports idols Olympic swimmer Johnny Weissmuller would certainly enter the conversation.

Weissmuller won three gold medals at the 1924 Paris Olympics (plus a bronze as member of the men's water polo team!) and two more at the 1928 Amsterdam Olympics. Just after New Year's 1929 the 24-year-old Weissmuller retired from amateur competition.

Tarzan the Ape Man premiered in New York on March 25, 1932. Weissmuller was instantly a movie star of the first order and went on to make a new career playing the part on screen.

When we think of Johnny Weissmuller today it is primarily in loincloth with Maureen O'Sullivan in his arms and not so much swimming gear adorned with Olympic medals.

When I went to the Newspaper Archive

to seek out interesting and obscure Weissmuller info I decided to see what he was up to in between his two careers. My search was for clippings from between 1929-1931. Here's what I found.

An overwhelming number of clippings still came from the sports section. Those were of little interest except to note that the extracts constantly contained words such as "former" preceding Weissmuller's name. Weissmuller retired from amateur competition following the scholastic swimming championships in Chicago on January 3, 1929.

It didn't take long for Weissmuller to get back into the papers and not in a positive light. A widely circulated AP news story originating from Miami on February 26, 1929 reports that Weissmuller received a suspended sentence of sixty days in the city jail when he pleaded guilty to reporting a false fire alarm. While my first inclination was to chalk this up to a wild night gone too far what makes the report curious is the fact that he was previously fined $10 on a similar charge.

After returning from France, where he's headed May 15, 1930 to dedicate a new outdoor swimming pool, Weissmuller will begin a tour of the U.S. for the B.V.D. Swim Club. Weissmuller, who signed a year long contract with the company is said to be the club's president.

Weissmuller met Broadway star Bobbe Arnst on Valentine's Day, 1931 and married her on February 28. It worked out about as well as that sentence might lead you to believe as Weissmuller next wed actress Lupe Velez in October 1933. Arnst did wait much longer herself, taking out a marriage license with Chicago attorney Robert Cavenaugh in April of the following year.

The "Hollywood Sights and Sounds" round-up in the July 24, 1931 edition of the Corsicana Daily Sun makes reference to a silent sports short Weissmuller shot "in the declining days of silent films." Merna Kennedy is said to have appeared in it which is I why I mention it here. I don't see Weissmuller and Kennedy credited together on the IMDb in anything. The blurb concludes "In the talkie confusion, the short never found release."

(Upon further research I see this short referenced in the September 26, 1930 issue of Film Daily as being one of C.C. Burr's one-reel Sport-Logs. Another subject of the series was middleweight boxing champion Mickey Walker.)

I'm no Weissmuller scholar but I'm wondering if the folks at MGM suggested this for Johnny.

Report of Weissmuller taking a voice test before finalizing his contract. Referring to the Tarzan movie, "The manuscript, with its cut and dried speeches, scared him, so he said he'd deliver something he knew." It's claimed Weissmuller then recited Lincoln's Gettysburg address three times. 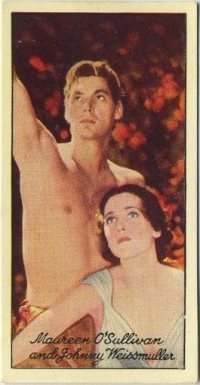 A December 22 piece by Dan Thomas catches up with Weissmuller when filming on Tarzan the Ape Man was just about complete.

"I would like to keep on acting if I can but I'm not sure I'll be able to--I'm not very good," Weissmuller told Thomas.

"I get an awful kick out of this business ... And I still think it's a lot of fun to see all the stars. Clark Gable said hello to me yesterday ..."

Thomas calls Weissmuller a "cinch bet for pictures" despite the fact that "he isn't good-looking" because "he has a marvelous physique and the same kind of strong face that has put Clark Gable, Wally Beery, George Bancroft, Edward Robinson and a few others where they are today." (Boy, did everyone pick on Gable in those days?)

Thomas reports that Weissmuller expects to appear in Westerns after the Tarzan movie. "He wants to stay in this business but he knows it will be a long time before there is another film like 'Tarzan' ..."

A good two years until Tarzan and His Mate in fact. Though neither Thomas nor Weissmuller could have known that!

Johnny Weissmuller day on TCM features all 12 of his Tarzan movies, a documentary and 3 Jungle Jim movies just for good measure!