So what did you think of the Stanwyck movies on Friday night?

I hadn't seen any of those four movies before and while none of them absolutely knocked my socks off each of them was well worth taking the time to watch. The last of the four movies, Frank Capra's Forbidden (1932), stood out amongst this collection of pre-codes and will be worth repeated viewings.

If you were around on Twitter late Friday night you would have seen that I confessed to falling asleep for about twenty minutes in the middle of Shopworn (1932). I put on my recording of it when I went to bed Friday. Fell dead asleep on it once more.

So I can't say a heck of a lot about Shopworn. From what I did see I liked it least of the bunch. At the same time I did like it. Regis Toomey isn't a favorite and I'm honestly glad that if a catnap had to creep up on me it was during that first of the Stanwyck quartet.

Because Ricardo Cortez is a favorite. Especially sleazy Ricardo Cortez. So despite an enjoyably hyper Monroe Owsley in Ten Cents a Dance (1931), I did prefer Illicit (1931) because it offered the more typical scoundrel scenes for Cortez. He's light on morals with his trademark smirk not only firmly in place but even noted out loud by Stanwyck!

I'd say that I wished Cortez and Owsley had switched roles in Ten Cents a Dance, but that'd be shortchanging Monroe Owsley. Owsley wasn't quite as morally repugnant as he was in Call Her Savage, but just as tightly wound and completely out for himself. At least Clara Bow had a hint of what was coming with Owsley in Savage. No such luck for Stanwyck, who's hooked from the go despite the attentions of a well-behaved suavely mustachioed Cortez. The problem with making Owsley the baddie in Ten Cents a Dance is that Cortez' own talents for dastardly deeds went wasted in a part anyone could have handled.

Ten Cents a Dance (1931) is reviewed in full in a more recent post.

In Friday night's third feature, Illicit, Stanwyck explodes with sex right from the get go. She's lounging about with James Rennie, who plays her lover, playfully talking about how naughty they are. She's in love with just the one man in Illicit, but very much against the idea of marrying him. The title refers to the openness of their affair which is causing a scandal among society but Stanwyck's Anne Vincent refuses to settle down to the typical married life and all of its constraints and conformities.

Tons of fun supplied on the side by Charles Butterworth as Rennie's drunken pal with young Joan Blondell tagging alongside him. Butterworth also hangs around with Natalie Moorehead's Margie, herself desperately in love with Rennie's Dick Ives. Ricardo Cortez is a lone wolf as Price Baines, his character as well off as the name would have you think. Price is Stanwcyk's former flame still hot in pursuit. All of the potential jealousies are aroused over the course of Illicit. This was the best of the first three movies on TCM's Friday night slate. 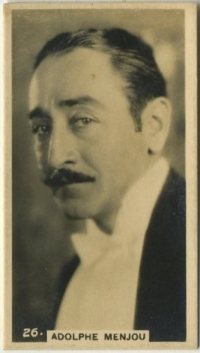 The evening closed out with Frank Capra's Forbidden starring Stanwyck with Adolphe Menjou. The movie opens with Stanwyck as an old maid long before the time she should be declared so. Kids make fun of her on her way to work and her co-workers needle her once she arrives. It's Springtime and she wants a man. Badly. So she takes every penny she has out of the bank and sets off on a vacation to Havana. There she meets Menjou who is traveling alone seeking similar escape. They immediately click and within moments of meeting have already assigned each other pet names based on their hotel room numbers.

66 and 99 have a whirlwind of a Havana romance before heading back to reality. Stanwyck is suddenly working at a big city newspaper where an obnoxious Ralph Bellamy spends the next couple of decades harassing her for a date. But she's still involved with Menjou and everything is going beautifully until Adolphe fesses up that he's married. Stanwyck has a secret for him too, but doesn't reveal it right away.

Stanwyck, Menjou and company age about twenty or so years during the course of Forbidden. Our Havana lovers manage to remain devoted to one another on the sly throughout the rest of their lives. Despite Menjou's handicapped wife. Ouch. He's a little tougher sell as the good guy he's presented as on account of that. Especially today. But at least he's conflicted over his actions.

In addition to Menjou's hard to swallow morals quite a bit of the story that follows is completely unbelievable. But Stanwyck sells it hard and makes it work to such a degree that I found myself rooting for Menjou to find a clear path to her, even if said path would have had to come through a cutthroat and bit too convenient turn of storytelling.

Forbidden never takes that easy way out and what little bit of joy 66 and 99 can find with one another in the intervening decades remains threatened not only by propriety but Bellamy's newspaperman. I never quite figured out what Bellamy held against Menjou, but it kept him possessed with bringing about the downfall of Menjou's politician. Maybe Adolphe was just a bit too privileged for working guy Bellamy.

Forbidden builds to a pretty shocking conclusion which I won't say too much about other than to mention that it put images of Bette Davis at the start of The Letter (1940) in my mind.

Capra plucks the heartstrings as usual, but hey, I like that. Of the four Stanwyck movies that TCM aired, his Forbidden was the only one of the bunch that managed to pull any kind of emotional rise out of me. Illicit was a close second, but besides Forbidden most of the evening was about sitting back and enjoying young Stanwyck in action in a series of fast and loose pre-code sex stories.

In other words, a well spent evening.