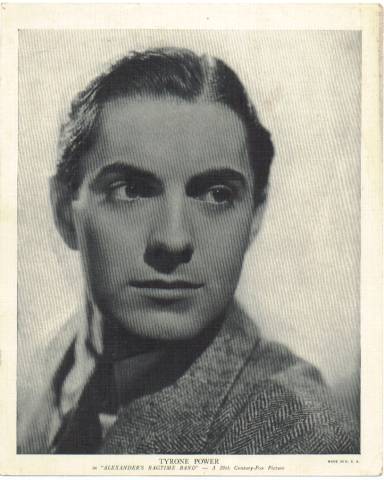 My own favorite Tyrone Power films include The Razor's Edge (1946) based on the Somerset Maugham novel of the same title and Power out of usual type as a sleazy con artist in Nightmare Alley (1955). He's also enjoyable as the cocky O'Leary brother in In Old Chicago (1937), about the great fire in 1871.

On a 1942 Dixie Lid Power promotes "The Black Swan"

There's a complete biography of Tyrone Power by Scott D. O'Reilly posted over on the main site which begins:

Few actors have been so closely identified with the swashbuckler / adventure genre than Tyrone Power, and even fewer actors have worked as hard to overcome that identification. But Power succeeded on both counts, starring in some of the most successful adventure yarns of the 1930's and 1940's, and later drawing critical acclaim as a versatile and accomplished actor.

Tyrone Power was born on May 5th 1913. To say that acting genes were in the family would be an understatement: Tyrone's father and mother were both actors, as was his great grandfather. Tyrone was a frail and sickly child, and in the interests of his health the family moved to California. The young Tyrone was eager to follow his father's footsteps, the elder Power having established a successful career on stage and screen, appearing in numerous silent films, and an early sound film opposite John Wayne in one of "The Dukes" earliest films "The Big Trail."

Power married three times, including to actresses Annabella and Linda Christian, and had a well known affair with Lana Turner.

Tyrone Power died young, just 44 when a heart attack claimed his life November 15, 1958 while on location in Madrid filming Solomon and Sheba (1959).