Tonight's marks the 15th Anniversary of my, and if you're reading this quite likely your, favorite channel, Turner Classic Movies. They celebrate with the 8 pm airing of Gone With the Wind (1939), which also happens to be the first movie airing on TCM back on April 14, 1994. 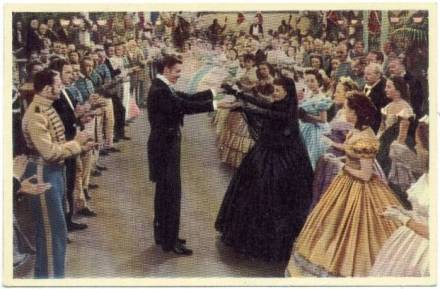 1940 A & M Wix Cinema Cavalcade Tobacco Card - No. 179: Gaiety in Atlanta - Scarlet (Vivien Leigh) scandalizes the aristocracy of Atlanta by agreeing to dance with Rhett Butler (Clark Gable) at the local ball although she is still in mourning for her husband.

My cable network didn't carry TCM at it's launch, but back in '94 we still had the good American Movie Classics (AMC) channel, the one which aired actual classics with no commercial interruption. So while I looked forward to having TCM, I wasn't in any big rush to get it back in '94. I figured I'm on Long Island, we get everything. Surely Cablevision will carry TCM soon enough.

Little did I realize that Cablevision's 1993 purchase of a majority share of AMC would mean I was in for a much longer wait than originally anticipated. Why would my cable company want to air the programming of it's direct competitor?  What may have been a blessing in disguise crushed me a the time when AMC changed it's programming to include more recent classics and added commercial interuptions in late 2002.  AMC was dead to me and Cablevision still wasn't carrying TCM!

Finally, we got it.  I blogged about the shock of finding the right version of The Manchurian Candidate on previously vacant channel 97 back on September 25, 2006.

So while it's nowhere near 15 years for me, I'm more than happy to celebrate it because I'm betting that I'm not going to find Gone With the Wind airing on any other channels tonight!

There's a great article dated April 11, 1994 available (for free) in the New York Times Archives about TMC looking for carriers.

The entire article is well worth reading, but I found this portion particularly interesting:

AMC focuses almost exclusively on movies of the 1930's, 40's and 50's. But TCM plans to show films from the 60's, 70's and 80's as well. Mr. Siegel said this should let the channel appeal to a "much wider demographic, not just to older people."

While even in my comparably brief time with access to Turner Classic Movies I've noticed the encroachment of newer films, I'm glad to say it remains most noticeable in February during "31 Days of Oscar" and I am confident they'll continue to air the great classics, both familiar and as of yet undiscovered, that I've come to love them for showing.

I mean, what better illustrates just how wonderfully eclectic TCM's current programming is than their running a Torchy Blane marathon throughout the day of their anniversary!  How cool is that?