I recently picked up a batch of slightly over 60 vintage postcards featuring silent film stars. The collection was extra interesting because these are quite early poses.

You'll notice most of that most of the cards and collectibles shown on this site date no earlier than 1915 or 1916. Some exceptions include sets I've highlighted that are actually cards intended to promote stage stars, some of whom later became film stars.

The postcards in this early collection are shots of actors and actresses already known for their film work. Or at least in promotion of their film work. Most of the cards even include a film studio in text at the bottom.

Most of these early film star postcards are undated. But two of them are dated 1912; another seven are dated 1913. The rest, judging by the stars I'm actually familiar with and have seen posed on other items, likely date no later than 1915.

I've created a Gallery of these early film star postcards found HERE. But I'm going to highlight a handful of the individual postcards on this page.

at the moment. As I write this they are all at auction with minimum bids ranging from $5.99-$9.99. Prices go up on unsold postcards at the completion of the auctions.

We'll lead off with the one postcard which is no longer available, but still a pretty picture to share! Screen legend Lon Chaney has been sold off early to a private collector, but here's the image of that card:

The Chaney above, all cards shown below and elsewhere in the postcard gallery were issued by Kraus Manufacturing Company out of New York. Each measures approximately 3-1/2" X 5-1/2", give or take an eighth of an inch either way, and each has a divided post card back, like so:

Those which included a copyright date typically did so on back:

Others did so on front:

And one, Wallace Reid, included the date in a copyright notation inside the original negative:

And here is the full look at that early (1912!) Wallace Reid image:

I did a photo post sometime back showing off ten popular character actors of the 1930's pictured as younger leading men and ladies on 1910's collectibles. Donald Crisp and Robert Warwick are a pair from this current crop which would fit that bill as well: 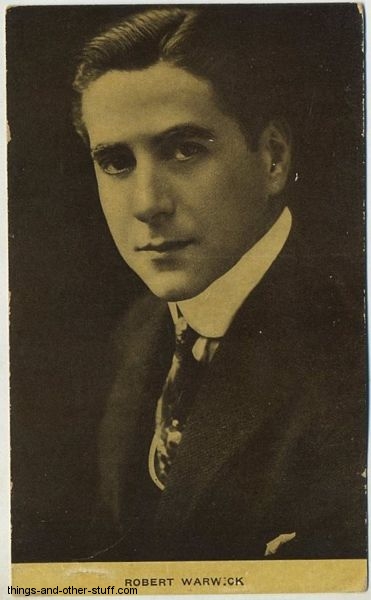 Jane Wolfe stands as the most interesting film star from this collection whom I didn't know a blessed thing about yet had an IMDb biography so interesting you'd swear somebody made it up!

Wolfe has a pretty packed filmography from 1910-1920 at which time she became more involved with her lifelong interest in the occult. She began a correspondence by mail with famed occultist Aleister Crowley that culminated with her leaving films to join him at his Abbey of Thelema in Cefalù, Sicily from 1920-1923.

Here she is pictured during what was probably the busiest portion of her film career:

A bit more traditionally to silent film star collections are the always welcome inclusion of each of the Gish sisters:

And speaking of sisters, following are Madeline and Marion Fairbanks. They were billed as The Thanhouser Twins while working for, you guessed it, Thanhouser Film Corporation from 1912-1916:

Here are the Twins again, still together, but this time billed under their own names on a circa 1915-1916 trading from an unidentified set I had possessed some time ago:

According to her IMDb page Baby Marie Osborne was born Helen Alice Myres in 1911 and arrived in California in 1914, right about in line with these postcards. Marie Osborne left us only somewhat recently, dying just after her 99th birthday in 2010.

What do you think? I feel pretty confident saying Baby Helen is Baby Marie, do you agree:

Once more the circa 1912-1915 Kraus Manufacturing Company Postcards of Early Film Stars can all be seen in THIS gallery. At the time of this post all of them, except Chaney, can be bid on at auction on eBay

as well. Hope you enjoyed them!