Joan Crawford is a bad girl turned good who slips after sipping two shots of the bootleg elixir found inside Guy Kibbee's flask.

That second shot seemed a bit much!

Laughing Sinners, based on Broadway's Torch Song, is highlighted by Joan's frenetic dancing performance towards the beginning of the movie. From the silly costume she opens her act with, including long nose and gray beard, to her shedding that clown act for a sexier shake and shuffle, there's no taking your eyes off of her. We're rewarded for spending the rest of our time with Laughing Sinners by an abbreviated song and dance from her near the end of the movie.

After Joan's bad girl Bunny--and perhaps it speaks poorly of my own morals but she seemed more fun than bad--is jilted by traveling salesman Howdy (Neil Hamilton) she's saved from taking a dive off a local bridge by Salvation Army volunteer Carl (Clark Gable).

Bunny soon trades glamor for the Salvation Army's robes and tambourine and reverts to her Christian name, Ivy, for good measure. But it's the very street corners she and her gang populate which bring her back in touch with Hamilton's now married road weasel, Howdy. She slips off the moral trail leading to the opportunity for Kibbee's flask to enter the picture and further kill the wholesome new life Bunny had tried so hard to settle into.

I was drawn to this title because of its prominence in Guy Kibbee's biography. It was his first Broadway show after he had spent over two decades playing live across America and it made him an overnight sensation well into his forties. I'm obviously not familiar with exactly what occurred on stage but I'm assuming his role of Cass Wheeler, mortician supply traveling salesman (or better put by Cass himself, salesman of underground novelties), had a lot more going for him on stage in Torch Song than he had on screen in Laughing Sinners.

It's then that Kibbee stumbles into the wrong room and finds Ivy at precisely the wrong time, aiding her slip back into Bunny's bad old days.

While Neil Hamilton's delivery has begun to remind me of a bargain basement Jimmy Cagney, it's hard to believe that his weaselly charms could persuade a luscious young Joan Crawford to ever consider straying from Clark Gable. Even in 1931. But thanks to the Salvation Army's reformation Gable's Carl is a nice guy but a total boor on the whole. Darker days involving a two-year prison stretch are mentioned as part of Carl's past and that does at least give the character a little bit of an edge. 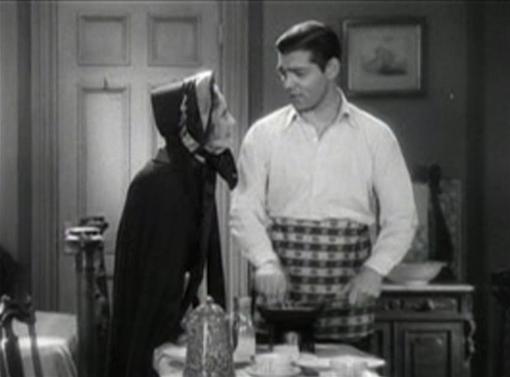 It's good to see Gable get to lose his temper in the climactic scene, but I would have much preferred him as the sleazier character with Hamilton as the harmless goody two-shoes.

Gable actually came to the production late replacing the actor he'd pretty much stolen the show from in The Secret Six (1931), Johnny Mack Brown. According to Gable biographer Chrystopher J. Spicer

, MGM studio head Louis B. Mayer recalled Gable's appearance opposite Crawford in Dance, Fools, Dance (1931) and was so disappointed by Brown's work on Laughing Sinners, then titled Complete Surrender, that he ordered Brown's parts cut and had the entire film reshot with Gable in his place (72-73).

Too bad it didn't occur to him to flip-flop Gable with the then bigger star Hamilton. Gable would get his chance to be the bad boy soon enough with his next effort, A Free Soul (1931), which appears to have gone into production immediately after Laughing Sinners. His stardom is building, though Laughing Sinners was more setback for him than leap ahead.

I was a little surprised at the mediocre IMDb user rating of 5.4/10 with just over 200 users voting. I liked Laughing Sinners better than that. While I'd probably rate a half point less given the option I wound up pressing the button on a 7 rating myself. Though if you're coming to the show purely for Gable then I'd say it's a flop.

Laughing Sinners is available as a Made on Demand DVD from the Warner Archive. It can also be purchased HERE

through my Amazon affiliate link. Laughing Sinners is shown on Turner Classic Movies, I caught it during the recent Guy Kibbee birthday schedule, but as of this writing it is not scheduled to air on TCM anytime in the near future.

The March-in-March blogathon has begun over at Sittin' on a Backyard Fence and it's kicked off with a fantastic piece about March as Dr. Jekyll and Mr. Hyde by Josh Mauthe. I'm overdue with submission of my article about The Adventures of Mark Twain, but I figure if I keep mentioning it, I'll get it done!