You are here: Home / News - Notes / Odds and Ends: Quaker Standees Gallery Updated plus March in March and Jane Eyre

I believe I made some mention to subscribers of acquiring a new batch of 1930's Quaker Standees. I had previously updated only the checklist but now I've finally allowed the lure of a dollar to pry them from my selling stack and offer them at auction on eBay

. To list them for sale I had to scan them and so the 1930's Quaker Standee Gallery has now been updated to show images of each of the 32 standees I've ever run across. A complete set? Perhaps. Who knows.

I have 29 single Quaker Standees currently offered on eBay, the largest grouping I've ever seen of them at one time. In fact, prior to acquiring this group I'd only had 21 Standees checklisted, which should give an idea of how unprecedented a group of 29 are! While I know a few single Quaker Standees have popped up on eBay and other sites over the years, I only buy in bulk to resell and I can tell you that it's been 5-6 years since I last managed a purchase of Standees even approaching this one in number. They are by no means common.

The latest 29 brought our checklist up to 31 items total, but then I received an email from an eBay seller named Lee who was kind enough to donate to us an image of number 32: Myrna Loy.

went up on the site Thursday night and are scheduled to end the evening of next Thursday, February 9. The majority open with a $9.99 minimum bid, about a third of them I've set to open at $14.99. Frankly, they're a bargain and I'm crossing my fingers that a few of them go for well beyond those opening bids.

Quicker to the punch than I am with this post, Carole & Co. posted about the Quaker Standees earlier tonight. Carole & Co. was also kind enough to point to both my auctions and gallery page. Thank you again for that!

I was very flattered to be asked by Jill at Sittin on a Backyard Fence to participate in the March-in-March blog event she's hosting in, yes, March. The subject, you guessed it, Fredric March. March is a favorite and I've already covered several of his movies on Immortal Ephemera, so I couldn't resist the temptation to add another to the collection. For March-in-March I'll be writing about March's starring role in The Adventures of Mark Twain (1944).

The new article will first appear on Jill's Sittin on a Backyard Fence site sometime between March 15-31st. I'll likely post it in full here at this time as well.

Towards the start of this event I'll be posting a reminder pointing to the first of the Fredric March articles by other film bloggers (unless I draw Day #1, in which case I'll awkwardly point to myself) and linking to some of my past March work here. If you can't wait and need a dose of Fredric March right now, check out my Fredric March Index which includes links to all of the March related articles I've written on Immortal Ephemera. 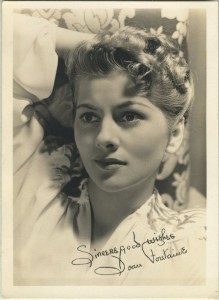 Excuse me if I'm writing in a more formal tone tonight but I've just watched Jane Eyre (1943) and Orson Welles' voice is still booming through my mind. With a light night on my hands here I found myself unsure of whether I should work on the website or relax with a movie. This was about 1 am. I'd need coffee if I were to work, instead I went a rarely traveled path and made myself a hot cocoa and opted for the movie.

Why the hell did Jane Eyre have to be so good? Now it's just past 4 am, I'm still up, typing away, wide awake. I'd studied the book in college and I'd thought I'd seen the movie, at least back then, but it was completely unfamiliar. And so a movie I'd dismissed because I was so sure I'd seen it and if I had it had obviously left no impression, went unwatched until tonight and kept my drowsy eyes open for the duration--and beyond. I love when that happens.

Realizing I was in unfamiliar territory as the earliest scenes played out with Peggy Ann Garner as young Jane Eyre I decided, even as much as I enjoyed that first portion of the film, that Orson Welles was going to show up and ruin this thing.

Oh, I love Welles, don't get me wrong. I don't think Citizen Kane (1941) is overrated and The Third Man (1949) is favorite. I like him in commercial titles such as The Stranger (1946) and slightly stranger fare such as Mr. Arkadin (1955) and the bizarrely entertaining adaptation of Kafka's The Trial (1962). But as Rochester? In Charlotte Bronte's 19th Century world? I admit I couldn't see it.

Wow, was I wrong. His towering stature, booming voice and most of all commanding presence over Joan Fontaine's Jane Eyre and all of Thornfield blew me away every second he was on camera. Welles was every bit the strange, slightly twisted, tortured soul the part called for.

I'll stop there before I find myself doing research and writing an expanded article about Jane Eyre. Perhaps I'll do just that in the future, but as for now I'll just leave you with those first impressions. It has been a good 15 or so years since I read the novel, I've surely forgotten all but the basic story so there was no potential of literary letdown here. Just a wonderful first time film experience leaving me with hopes of more pleasant surprises ahead.

*After finishing this I realized that I had previously seen the 1934 Monogram version of Jane Eyre starring Virginia Bruce and Colin Clive. Apparently about all I liked about that one was Clive's Rochester.