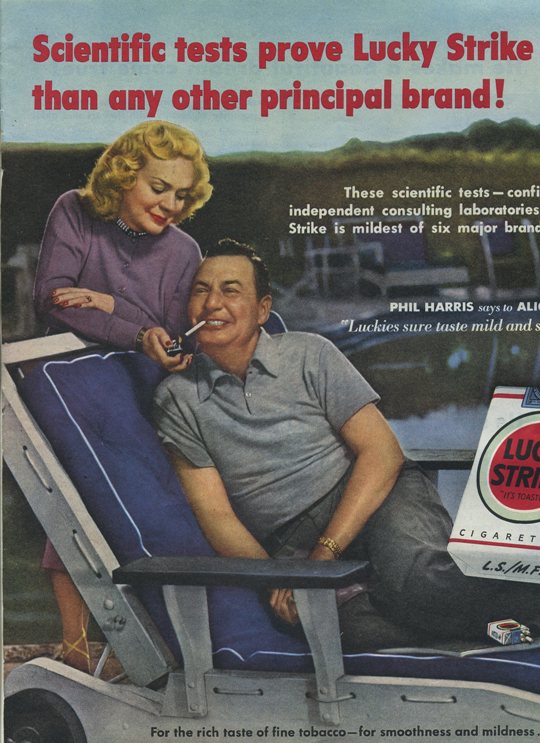 I was paging through some discarded issues of the Saturday Evening Post hoping to come up with something good to write about for my magazine collecting site when I came upon this ad. The bright colors are what led me to decide to share it, and it would have been even prettier if my scanner was big enough to fit the entire large format page!

The ad appeared in the August 5, 1950 edition of the Saturday Evening Post, a full five years after Alice Faye had left her film career at 20th Century Fox behind her. After her disappointment with Fallen Angel (1945) Alice wouldn't return to the screen until 1962's State Fair.

Faye had previously been married to singer and actor Tony Martin (who's still with us having just celebrated his 99th birthday on Christmas day!) but her marriage to bandleader and funnyman Phil Harris would be the one that would stick.

Their 1941 wedding came as a surprise, especially to friends who considered them poorly matched and never thought the union would last. Alice Faye was Mrs. Phil Harris for 54 years until his death in 1995 at age 91.

At the time of this ad Alice and Phil were starring in the successful Phil Harris-Alice Faye Show on radio, a domesticated spin-off of Phil's popular persona on Jack Benny's long running hit radio program.

Old Time Radio Catalog offers 107 episodes of the Alice Faye-Phil Harris Show, approximately 53 hours of entertainment, on two mp3 CDs for just 10 bucks. Check that deal out at OTRCAT.com and listen to a sample clip of Phil and Alice on that page as well.

I thought I didn't like musicals. But man, I love the 1930's, so it wasn't too tough for Busby Berkeley, Fred & Ginger, and especially Alice Faye to change my mind. Now I realize I just don't like post-World War II musicals. I'm flexible though, time and exposure could always change that.

The thing about those personalities named above is that Berkeley along with Astaire & Rogers are more about visual delights. At times the songs seem incidental when watching either a rollicking bit of Berkeley choreography or finding your eyes glued to the dazzling Fred and Ginger. But Alice Faye, more often than not, just stands there and sings. Not only is that enough, but it's as much as the others. She doesn't need to move.

My favorites seem only limited by what I've managed to see so far. In Old Chicago (1937) is an early favorite for me and I still love it. But even though it's what first hooked me on her that one has a lot more going on than just Alice Faye.

I've also now watched the trio of Alexander's Ragtime Band (1938), Lillian Russell (1940) and Tin Pan Alley (1940) several times apiece and they grow on me a bit more each time. Ironically my favorite Alice Faye movie may actually be the non-musical, Hollywood Cavalcade (1939), a celebration of silent slapstick which is probably more fun than good.

I think Rose of Washington Square (1939) may be up next for me as I'm waiting for Amazon to credit me on some Christmas returns. My cart is filling to excess mighty fast though, I hope they receive my returns soon!

. They can also be seen inside the main Alice Faye gallery on my Alice Faye hub page.

For more about Alice Faye I highly recommend Jane Lenz Elder's 2002 biography Alice Faye: A Life Beyond the Silver Screen

(Note: Amazon's overall customer rating for this book is unfairly weighted by duplication of a two-star review).