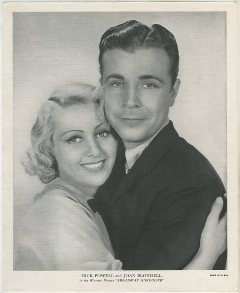 Stage Struck is the Busby Berkeley musical that ends with a kiss, not a big stage number. In fact there aren't many of the typical Berkeley routines in Stage Struck at all, but I don't want to blame Berkeley for this as he was a bit busy during production defending himself from multiple charges of second degree murder.

As recounted in Jeffrey Spivak's recent biography Buzz: The Life and Art of Busby Berkeley

, Berkeley left a party on September 8, 1935 and had a tire blow out on the way home. He stopped and had it replaced, but then resuming his drive a different tire blew and sent him head-on into another car immediately killing one of its passengers. Panicked, Berkeley left the scene and was soon discovered by a police officer in a nearby diner. Two additional passengers died and Berkeley wound up charged on three counts of murder in the second degree. His trial began December 16, 1935 and wound up in a hung jury with a 10-2 vote for acquittal. The second trial deadlocked and came to its completion just two weeks before production began on Stage Struck. The third trial took place during production and would up with the Superior Court jury acquitting Berkeley.

Berkeley said, "Even though I was found innocent, it was a shocking and terribly depressing thing to have been involved in the death of three people. I think it was the heavy work commitment that saved my sanity" (143).

So I doubt this was the lightest of sets, despite the courtship of Stage Struck's two stars, Dick Powell and Joan Blondell, who'd be married September 19, 1936, just a week after the film's premiere. Powell nearly lost out on the Stage Struck lead because of doctor's orders requiring him to rest his throat. Warner's had Rudy Vallee on hand as potential replacement, but Powell convinced his bosses that he could do it (Spivak 137). Blondell was ailing as well with a sprained ankle (Kennedy 78).

Then there was the case of Warren William, former Warner's lead who had to be convinced by his agent to take a roll that he wasn't top-billed in because it beat starring in yet another B picture (Stangeland 162). While Stage Struck was shooting William and his agent were negotiating his exit from his contract at the cost of $10,000 for William (164).

Despite all of these distractions, Stage Struck comes across as good fun with Blondell's Peggy Revere, a Peggy Hopkins Joyce type, rattling off malapropisms throughout (Quoting "Shakespeare, the bird of Avon," for example, by stating, "when two's company, he who hesitates is lost."), and William laying some humor on the lines of his cutthroat producer, Fred Harris. Dick Powell is fine as well, his dance director George Randall seeming to behave exactly how I'd expect Berkeley to behave himself.

As expected the story is simple, so simple that we've heard it before. Randall's rehearsing a new show when his producer, Arthur Wayne (Hobart Cavanaugh), comes in to tell him a change is being made and socialite Peggy Revere is his new lead. Randall is incensed and his meeting with Revere, famed as the girl who killed her husband, does not go well, winding up with Randall quitting and Revere withdrawing financial support of the show. The whole thing is bust.

Hobart Cavanaugh at left with his back to us. Joan Blondell at right.

But Randall bumps into another producer, Fred Harris (William), and signs a contract with him after putting down a few too many boilermakers. Randall tries to break his contract the next morning and succeeds when Harris introduces the star of their show, Peggy Revere, who tears up Randall's contract for him. Of course, those were only carbons so Harris still has Randall over a barrel and threatens to break him if he tries breaking the contract.

Harris' meek assistant, Oscar Freud (Johnnie Arthur), provides unintended inspiration by virtue of his last name when Harris decides to use psychology to get Revere and Randall to co-exist. Since Peggy had turned love to hate when she shot her husband, why not work it in reverse and get her to turn her hate for Randall into love. Harris butters up Peggy asking if she'd ever heard of psychology, to which she replies, "Oh that. I studied that at finishing school along with lessons on the harp." She's not very hard to twist into place.

Meanwhile Randall is getting involved with a young chorine named Ruth Williams, "The Spirit of East Weehaukeegan," who's being played by someone named Jeanne Madden because I guess it would have been overkill to have Ruby Keeler do this again.

Randall tries to get Ruth to walk away from showbiz, suggesting she get a job at a local flower shop, but Ruth eventually finds her way back into the show through a meeting with the lead, Frost (Craig Reynolds), which causes some unsatisfying friction with Randall. Eventually Madden's Ruth is afforded the same path to glory that Keeler's Peggy Sawyer took in 42nd Street (1933), but while we do get Madden singing a couple of times throughout Stage Struck the film ends before the show goes on and we don't get to see her big debut.

The Spirit of East Weehaukeegan - Jeanne Madden as Ruth Williams

It may be cruel, but I'd imagine Randall's show, Words and Music, was just as much a flop with Ruth taking the lead as the critics decided it would have been with Peggy Revere doing the honors. Madden can sing, and I'll be honest, I'm not the best judge of that, but she's about as flat as can be otherwise. She spends most of Stage Struck appearing star struck, a toothy grin and awed look at Powell's Randall throughout except for one unfortunate scene where she had to pout.

Then we have the bizarre and dated mess who are The Yacht Club Boys. They sing two numbers in Stage Struck, one a weird song about the Income Tax that culminates with a radio announcer calling them in for a refund they have due. In unison they say "A refund? We won't pay it!" and smash the radio. Then later they have the most Berkeley-bizarre number in the film where they strip into circus strongman outfits and torment Warren William along with some poor people stuck on the floor above them. To close their heads all but detach from their bodies and rope towards us in a finish that probably would have given me heart failure had they had 3D back then.

The Yacht Club Boys ... in your face!

The Yacht Club Boys were together quite awhile, from at least 1926 when I spotted a reference to them in connection with Florenz Ziegfeld, through a run at each Paramount and Warner Brothers before splitting in 1939. Much to my surprise, Frank S. Nugent's damning review of Stage Struck in the September 28, 1936 edition of The New York Times singles out The Yacht Club Boys as one of the few elements of the movie worthy of praise. There are a lot of references to them, but nobody really seems to have celebrated them much on the page other than to often compare them to a musical Ritz Brothers. I'm not a Ritz Brothers fan either, so if you like them there's a chance you'll find me completely wrong about The Yacht Club Boys. For me, it was painful.

Dick Powell in a painful moment

Stage Struck is a mess, but in spots a bit of a fun mess. The Yacht Club Boys? No. Jeanne Madden is no Ruby Keeler. William has more to do here than he did in the more famous Gold Diggers of 1933 (1933). It's just a shame he had to play that scene with The Yacht Club Boys. Frank McHugh seems to be playing the same role he did in Footlight Parade (1933), and that's fine. Joan Blondell is a hoot, even if a few of her malaprops are clunkers. Dick Powell is decent, nothing more. About the same as the movie.

To read more about Stage Struck please see my article on Warren-William.com, written after this same viewing of the film.