You are here: Home / Movie Collectibles / Nicholas Volpe and the 1962 Volpe Collection of Academy Awards Portraits

Nicholas Volpe pictured in a 1968 ad

Nicholas Volpe is the artist behind a comparatively recent and affordable movie collectible that I've handled over and over in recent years. A 1962 copyright date and original $3 price tag are printed right on the outer folder which announces "for the first time ... A Complete Portrait Collection of Academy Award Winners - Best Actor Award and Best Actress Award, Suitable for Framing." Indeed they are.

Inside the folder are 67 different approximately 8" X 10" sheets of paper, each featuring a Nicholas Volpe drawing in charcoal of every Best Actor and Best Actress Academy Award winner from 1925-1961. The odd number results from the 1932 tie for Best Actor between Wallace Beery and Fredric March. Some actors and actresses are represented in the set more than once: Luise Rainer, Spencer Tracy, Bette Davis, Olivia De Havilland, spring to mind. In each case Volpe has done a unique drawing for each Oscar portrayal.

Nicholas Volpe won a lifetime commission from the Academy of Motion Picture Arts and Sciences to create his Oscar portraits. In creating them he had to decide how to handle each drawing as part of a greater overall project, so the finished collection would have some consistency. The text on one of the inside flaps of the Volpe folder explains that "whenever an actor or actress altered their identity in characterization, Volpe decided to draw a double portrait--as the players really looked and as they appeared in characterization." See the example featuring Robert Donat in Goodbye, Mr. Chips at the right.

Volpe also illustrated other items which have since become collectible including portraits sponsored by Union Oil picturing the Los Angeles Dodgers baseball team and the 1965 Cleveland Browns football team pictured on thermal tumblers as shown in a period ad on this page.

Volpe had other sports themed work as well, especially for the Dodgers with whom his time in Hollywood seems to have especially aligned him. Beyond the world of sport and film Nicholas Volpe would be commissioned to create portraits of John F. Kennedy, Winston Churchill, Dwight D. Eisenhower and Ronald Reagan back when he was Governor of California.

In the world of music he won a Golden Grammy Award for his illustration of the album cover for Frank Sinatra Sings for Only the Lonely and his 1964 portrait paintings of each Beatles member are currently for sale online. If you have a million dollars. 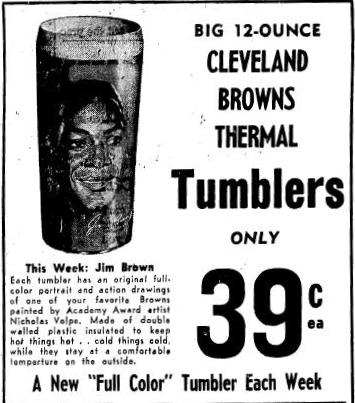 I was surprised such a well known and respected talent as Nicholas Volpe doesn't even manage to have a Wikipedia page all his own. That made tracing the details of his biography beyond the collectibles a little bit tougher, but what I did manage to cobble together follows.

The Volpes came from Italy and were living in New Haven, Connecticut when son Nicholas was born in 1911. The talented young Nicholas was sent back to Italy to study, not art, but violin, returning to the U.S. to attend Syracuse University on, of all things, a football scholarship! After graduating Nicholas Volpe overcame the challenge of thousands to become one of six winners of the Tiffany Foundation Art Scholarship Award.

After a time on Long Island he became a fine arts instructor at New York City's Leonardo da Vinci Art School, where he stayed two years before relocating to Jacksonville College in Florida where to serve as the Dean of Arts. According to Volpe: Portrait of an Artist he moved to Hollywood to not only design sets but also create makeup and fashion costumes. It was during this time that he began painting portraits of the stars which would eventually land him the commission from the Academy.

After winning his Golden Grammy for the Sinatra album he was commissioned by the Hollywood Brown Derby to paint nearly 200 top recording artists for the Derby's Hall of Fame Record Room. Nicholas Volpe would also have a newspaper column, Byways, published in the Los Angeles Herald-Examiner. Byways was what you might expect, a typical column would feature Nicholas Volpe drawings with accompanying commentary, also by Volpe.

Volpe was teaching art again at Pepperdine University in 1973 after which time he would begin a love affair with Mexico where he and his wife would travel on numerous occasions throughout the 1970's. Volpe was back for his final Union Oil Dodgers set in 1982. Nicholas Volpe died in 1992.