It's a talkie, but Call Her Savage is my favorite Clara Bow movie. I've seen a good 10-12 Bow silent features including her best known titles, It (1927) and Wings (1927). I've enjoyed her in everything I've seen. Others off the top of my head include Dangerous Curves (1929) and The Saturday Night Kid (1929), and the one I recollect as my runner-up favorite, Mantrap (1926). But when I want a strong dose of the It Girl it's Call Her Savage that I return to time and time again.

, available instantly at just $2.99. In addition to general revisions, the Call Her Savage piece includes additional information about Tiffany Thayer's source novel and a brief biography of Monroe Owsley.

Bow is heaps of personality all throughout Call Her Savage. She runs an emotional gauntlet often turning from one extreme to another at the drop of a dime. She whips Gilbert Roland's face to a pulp, she infamously frolics with a gigantic Great Dane, she parties with the boys, she fights Thelma Todd and in one scene she has a grand old time crashing a chair over someone's head and then punching a man dead in the face. She gives birth, turns to prostitution and sees her baby die.

She's the fun girl you want to be with at the party, but once you've got her you're left wondering what you've gotten yourself into.

Nasa knows she has a temper and she doesn't understand why. That's the problem with Call Her Savage.

Call Her Savage opens long before Bow's Nasa has even been born. Her grandparents' generation are shown to be homesteaders and her grandfather, Silas (Fred Kohler), is quite the dog, playing around with a younger woman while his wife rides alone in another wagon. After an Indian battle leaves one of the old-timers (Carl Stockdale) of their party dying he scolds Silas with a Bible curse warning him that the sins of the father are visited unto their children, even three or four generations down the line. Silas puts the old timer out of his misery with a foot across his throat until he breathes no more. The scene closes with Nasa's parents, Ruth and Pete, playing together as children.

All grown up and married Pete (Willard Robertson) leaves Ruth (Estelle Taylor) home alone while he goes off on a business trip. Pete's all business and it eventually pays off big for him as the Springers will be quite wealthy by the time daughter Nasa has fully developed into Clara Bow. But for now he's struggling along not paying enough attention to his wife and not thinking much of a local Native American man's crush on his wife. Pete even crosses paths with Ronassa (Weldon Heyburn) on his way out of town and asks him to keep an eye on Ruth for him.

Be warned, right from the title of the movie, to the constant use of the term half-breed, Call Her Savage does not go easy on Native Americans. The opening with Silas and the homesteaders includes an old fashioned Indian battle, the likes of which you've surely encountered in many a Western. More insulting in the 21st century are the connotations associated with being born of parents from two different races. The film is verging on 80 years old though, and the racist terms and ideas are totally indicative of those times. Contemporary audiences wouldn't have flinched. 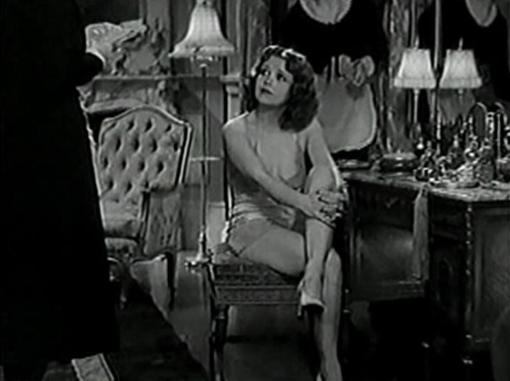 With that bit of warning out of the way you're going to find Call Her Savage to be one of the raciest pre-code movies you'll ever see. Clara Bow is in various states of undress throughout, especially in the beginning, and she progresses from being a young woman who likes a good time to being a young mother who gets paid for providing a good time. We get Nasa's full flavor right in the opening scene when her father spots her beating Moonglow (Roland) to a pulp with her whip and asks her why she's beating him: "I was practicing in case I ever get married," Nasa says with a smile.

The battle with Thelma Todd's Sunny De Lane is a result of Nasa's stealing Sunny's boyfriend, Larry Crosby (Monroe Owsley). The two girls go nose to nose trading insults before getting into a tussle where they're actually trying to tear each other's hair out.

Nasa, faced with the prospect of her father forcing her into marrying Charlie Moffett (Tyrell Davis), a nice fellow but surely the most boring man on the planet, escapes her own party with Crosby and marries him that night. Nasa spends her wedding night waiting for Crosby to get home from who knows where and manages to be disowned by her visiting father before her new husband stumbles home drunk.

Thelma Todd and Clara Bow, just about to scrap

Larry gets a call a little later that night, his and Nasa's wedding night, and turns on Nasa before he leaves her, declaring "I didn't get married to answer a lot of questions!" Crosby tells Nasa that he only married her to get back at Sunny for playing around on him. He's gone, returning to Sunny, but not to worry, his father owns a bank and Nasa can have whatever she needs to live on and entertain herself. Nasa takes advantage.

One of the more depraved scenes of Call Her Savage comes when Crosby's lawyer shows up to tell Nasa that Larry is very ill and wants her to come see him in New Orleans. When she arrives Larry, against doctor's orders, bribes his nurse to leave them alone and then pounces on Nasa once the nurse takes the payoff and leaves. He eyes her jewelry, jewelry he paid for, before crawling out of bed and cornering Nasa. He paws her and tells her she's "the most gorgeous thing that ever lived," ordinarily quite flattering I'm sure, but not so much from a cackling madman who's trying to rape you.

Nasa knocks him cold when she cracks a stool over his head, but it won't be the last we see of Larry, who returns later and manages to raise Nasa's ire off camera by disrespecting their dead baby. This incident comes at a dinner party when Nasa really seemed to have found true love at last with the wealthy Jay Randall (Anthony Jowitt). Well, the party ends with Sunny's eye blackened and Larry covered in food. Randall turns to Nasa and calls her--"Savage!"

Call Her Savage was Clara Bow's second to last movie. She's just 27 years old here. She had been driven from Paramount in disgrace a year before and Call Her Savage was her return to the screen for Fox. Despite her seemingly compromised position Bow was paid big money and even had script approval. She did have to lose 25 pounds and her contract specifically called for her to keep her weight at 118 pounds.

Call Her Savage was based on a notorious book by Tiffany Thayer and according to the A.F.I. catalog

, wrote in summary that "Her return could not have been more triumphant ... Clara came back with a quarter-million-dollar contract and creative control over her movies ... But not even a fortune could assuage her mike fright" (240). Bow still had one more film on her contract after Call Her Savage and that would be her final movie, Hoopla. She took it against her better judgement just to finish off her contract. Despite Hoopla's being well-received Bow would retire to Nevada with her husband, the actor and future politician, Rex Bell.

The standout performances in Call Her Savage belong to Bow and Monroe Owsley. Owsley, looking very much like James Spader, is perfect as the spoiled rich son of a banker who tries to have his cake and eat it too in regards to Sunny and Nasa. Thelma Todd holds her own as Sunny in trading insults with the smarmy Owsley, but he always manages to come out on top. Ravaged by illness he's no match for Nasa, so he goes for the physical attack instead. He's very good at being no gentleman.

Clara Bow does what she does in all of her silent films and just dominates every scene by pure presence. She's like an explosion of sex and cheer. Her mike fright is all the more amazing when you consider that Bow's talking not only enhances her performance but also somehow enhances that dominating presence. This Long Islander probably isn't the best judge, but by my ears there's no trace of a Brooklyn accent and her lines are crisply delivered. Bow's voice somehow ups the sex and cheer!

While Call Her Savage is great fun mostly because it's all sin and exploitation there is a performance in there as well. Nasa has her share of hard times to overcome culminating in a drunken stupor where she revisits all of the terrible things men have done to her before breaking a mirror. She stands framed by the broken glass, broken herself.

I get the feeling that if Barbara Stanwyck had done this it'd be considered a can't miss classic. If Jean Harlow had done it it'd have more general notoriety than Red-Headed Woman (1932). But Clara Bow starred in Call Her Savage and I don't think any actress could have done this one any better. A perfect fit.

20th Century Fox has finally made Call Her Savage available as a manufactured-on-demand DVD-R. This "Cinema Archives" release arrived in July 2014 and can be purchased on Amazon HERE

, with many thanks for using my affiliate link. 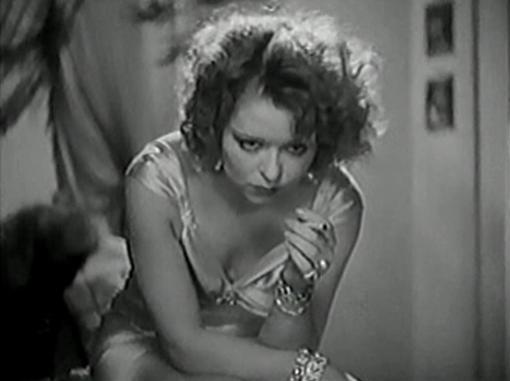