You are here: Home / Movie Reviews / The Beast of the City (1932) starring Walter Huston and Wallace Ford

The pre-Code gem from MGM does for cop flicks what the better-known The Big House (1930) does for prison movies.  It defines the genre.

The Beast of the City (1932) opens with a message on the screen from President Hoover imploring the glorification of policemen instead of gangsters.  Perhaps a not so subtle swipe by MGM at Warner Brothers, who are fresh off the success of Little Caesar and The Public Enemy in 1931?  Hoover's text continues, "If they had the implacable support of the prosecuting authorities and the courts--I am convinced that our police would stamp out the excessive crime--which has disgraced some of our great cities."

This MGM police drama has all the grit of the more famous pair of Warner's gangster flicks.  I can't pretend to avoid spoilers here, the violence in the last two minutes of The Beast of the City (1932) tops anything I've seen up to the time of its release, and because of the coming enforcement of the production code, most everything after it for quite a long time.

Walter Huston stars as Jim Fitzpatrick, captain of the city police force who gets knocked down a peg before being promoted to chief.  Fitzpatrick is absolutely honest and completely devoid of fear.  His life is the job.  Well, just about, he does have a family with his loyal wife, Mary, played by Dorothy Peterson, a pair of very creepy blonde twins, Helen and Madison, played by Betty Mae and Beverly Crane (they move in such unison I thought they were conjoined at first!), and a young all-American son, Mickey, played by 12 year old Mickey Rooney, who doesn't have much here but is already stealing scenes when he does.

There's an Americanism about Fitzpatrick which leads me to imagine Gary Cooper in the role if The Beast of the City didn't get made til later.  When humble Fitzpatrick is promoted to chief he hems and haws over giving a speech before finally stepping forward to say the following:

We're going to start with a clean slate, see?  I don't know a thing about any of you.  Good or bad, efficient or inefficient.  I'm not upsetting any apple cart.  Every man keeps the job he's got now until he proves to me he's worth a better one or he has no right on the force at all.  I'm not fighting you and you're not fighting me.  We're going to fight together.  Now this town has become about as rotten as an open grave.  Only some of you have got so used to it you don't have to hold your noses anymore.  Well, we're going to clean it up, understand?  We're going to knock over every speakeasy, hook shop, wheel joint and gin mill from South Canal to North Haven.  We're going to keep pulling in every monkey until they get so tired of it they'll all want to lie in the tanks or leave town.  Leave the country, not the town, but the country.  Each one of you is going to handle your own precinct in your own way.  You know more about conditions there than anybody else.  What I want is results.  If I don't get results there's going to be a shake-up like the inside of a cement mixer.  I'll get results if I have to put a patrolman at the head of the vice squad and precinct captain's back to teaching rookie's drill.  All right now, go out and get to work... 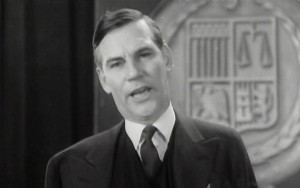 Of course there is a criminal element for Fitzpatrick to take on, in this case Sam Belmonte (Jean Hersholt), who's been impressed by Fitzpatrick before his rise and continues to be a thorn afterwards.  And what better way to break an honest cop then to go after his family.  Belmonte manages to flip Fitzpatrick's younger brother, Ed (Wallace Ford), a disgruntled detective who can't even get a promotion or pay hike after his brother's been made chief.  Belmonte has a little help making Ed Fitzpatrick come around from not so subtle sex pot Daisy Stevens.

Daisy Stevens is played by Jean Harlow just as she's coming into her own.  Personally I find the Harlow of The Public Enemy dreadful (and not so great to look at either), but this Harlow is almost all sex with a little good humor tossed in.  Well, actually that's pretty sexy too.  Consider this exchange, when Ford's Ed Fitzpatrick grabs her arm:

Daisy: Say, that hurts a little bit.
Fitzpatrick: And you don't like to be hurt, do you?
Daisy: Oh, I don't know. Kinda fun sometimes if it's done in the right spirit.

This is the same Harlow who told Chester Morris to "do it again, I like it," after he delivered one of the screen's most famous slaps in Red-Headed Woman, also released in 1932.

Belmonte and the boys succeed in getting the younger Fitzpatrick to aid in a heist, which leads to him pretty much being immediately busted by his brother.  At the trial the jury is intimidated by some pretty scary faces Belmonte has sitting in the courtroom, so Ed and Belmonte's boys get off scot free.  Huston's Jim Fitzgerald is shown stone-faced throughout his brother's testimony and the reading of the verdict.

Belmonte's Boys at the Trial

Jim continues to be paralyzed by anger, grief, or some combination of the two, at home that night.  When Ed comes over seeking forgiveness, Jim wants to hear none of it at first, but putting the badge before all else he offers his brother a glimmer of hope in redeeming himself by sending him off to Belmonte's party to confront him.  The Fitzpatrick's plan to have Ed rile Belmonte by telling him he's going to the papers with the true story, just when Belmonte's about to totally blow his stack, Jim and a crew of other officers will appear on the scene giving him the choice of coming down to headquarters peaceably, or the preferred result of starting a battle.

The Beast of the City was directed by Charles Brabin with a screenplay by the prolific W.R. Burnett.  Mordaunt Hall wrote of The Beast of the City in the March 14, 1932 New York Times "it may not be particularly dramatic as a whole, but the episodes are so cleverly wrought and the acting is so excellent that it always holds one's attention."  Besides the actors named above we catch glimpses of Edward Brophy and Nat Pendleton, J. Carroll Naish is Belmonte's brooding right hand man, and Tully Marshall dominates his scenes as the defense attorney for Belmonte and his men.

The violence which erupts in the final couple of minutes overtakes the entire police drama that President Hoover surely enjoyed throughout the first 80-plus minutes or so.  The timed movements of the officers through the haze of destruction is actually beautiful in a way.